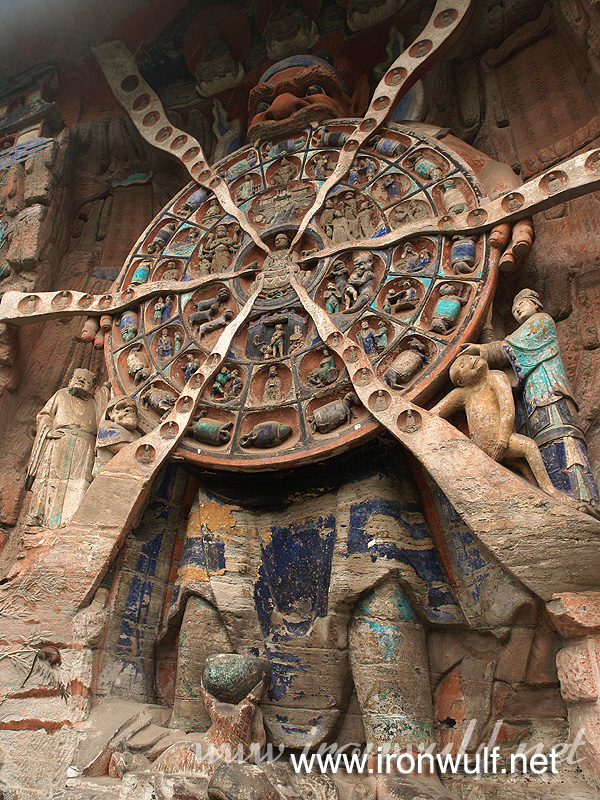 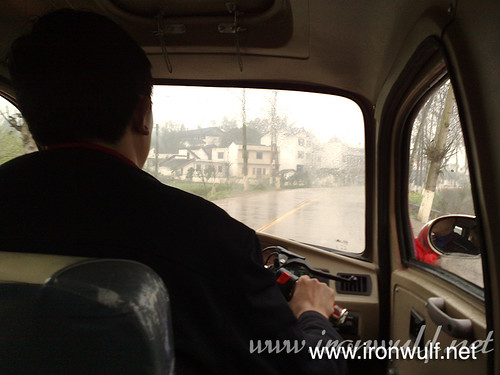 From the Bus station you have to tell the cashier clearly where you are going. They have this sheet of paper with Chinese Characters so you could point the right destination because the word Dazu, pronounced as Ta-Zu has a similar sounding name of another place. The bus fare going to Dazu County is RMB 48. 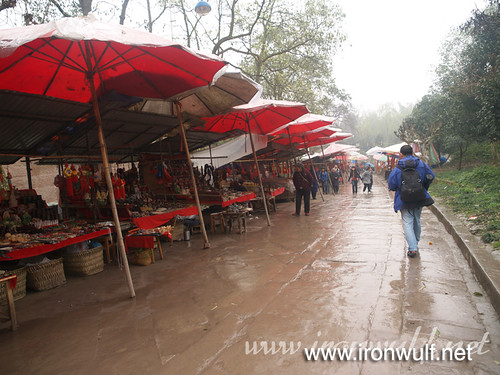 Souvenir Stalls on the way to the Carvings

We realized we hadn’t had lunch yet so we grabbed a quick meal at one of the stalls there. For RMB 8, you can grab those rice meals with different toppings of viands. It was actually delicious. We ate near our bus as fast as we can since the bus was gonna leave in a few minutes. Then the driver approached us and motioned towards the bus. I looked back at the other passengers who seemed to be impatiently waiting for us while we munched on our food. It seems we were holding the bus out. So we threw what’s left and got in. 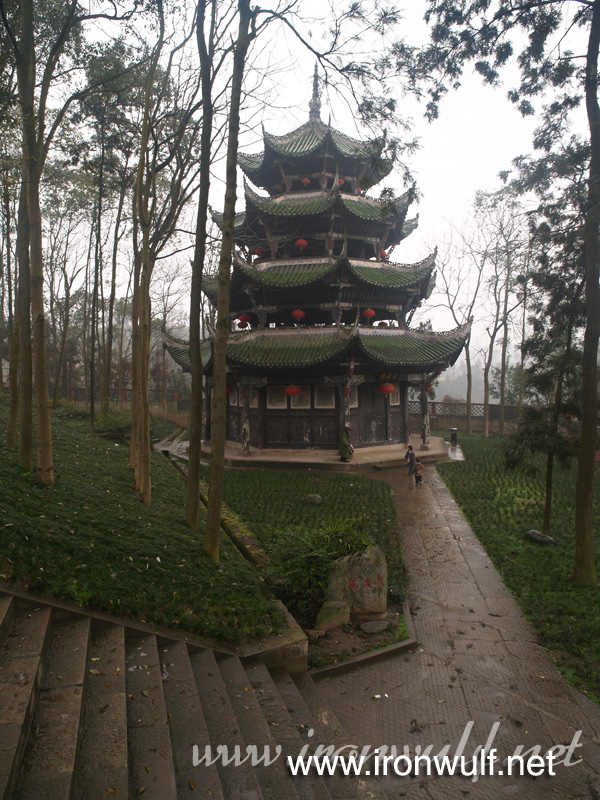 The bus ride to Dazu County, which is 167km form Chongqing, took around 2 hours. The bus station there looks old that it reminds me of the Dangwa Bus station in Baguio going to Sagada. We asked first when will the last bus leave and said it was around 6 pm. This is also where I had my initial culture shock on the men’s toilet. Getting out there we looked for a transpo going to Baodingshan. We eventually found a multi-cab like tryke which will take us there for RMB 50 round trip for the ride. Seems reasonable, at least we secured our transport going back to the town proper. 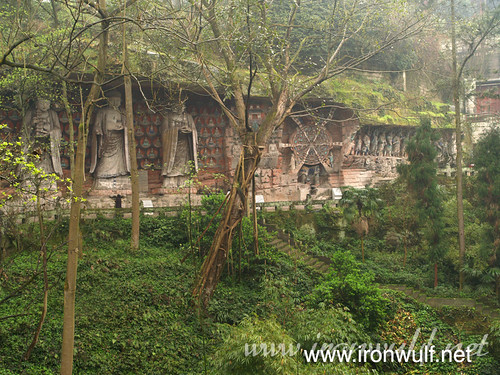 Baodingshan is one of the numerous ancient rock carving sites in Dazu County and is considered as one of the most preserved among the lot. Baodingshan is really a mountain, Mount Baoding. “Shan” is a Chinese suffix which also means Mountain, so Mt Baoding is the same as Baodingshan. So from here on, any mountain I mention I’ll just use Shan in the end. 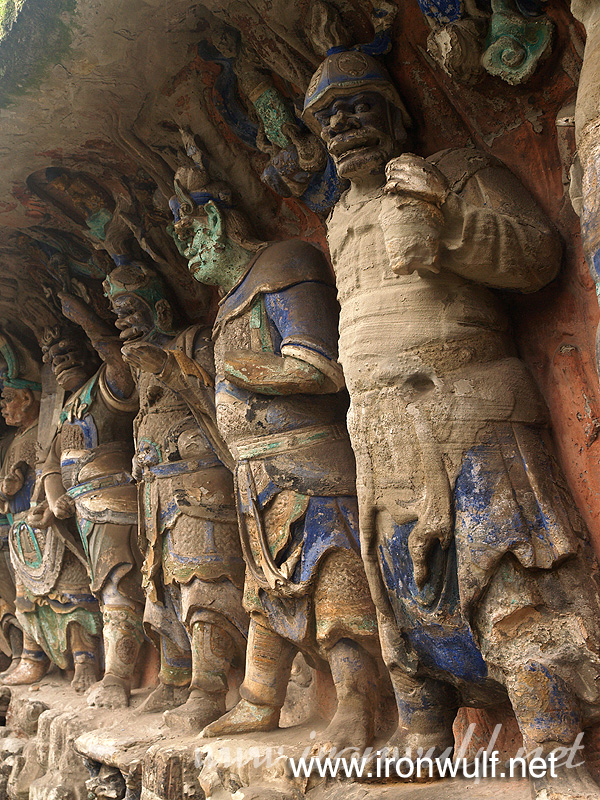 Niche of Guardians of Buddhist Law

It was a rainy afternoon when we rode to Baodingshan. It took only around 20-30 minutes to get to the site. From there you’ll pass by an old village and also a line of souvenir stalls before you reach the area where you’ll ride on this multi passenger cab for RMB 1 to take you to the entrance gates. The park entrance fee for Baodingshan site is RMB 80. If you wish to visit the other sites you will have to pay more. 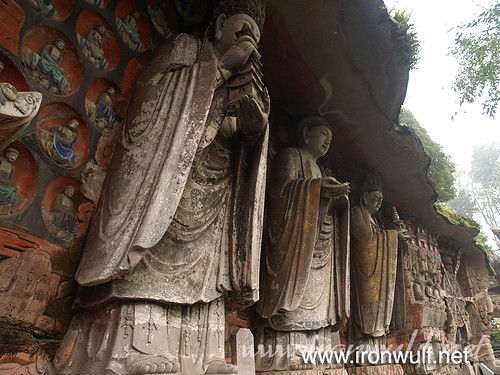 Passing by the entrance gates you’ll walk through the steep steps going down a U-shaped enclosure of cliffs. And from those cliffs you’ll be able to see these Ancient Rock Carvings. The Dazu Rock Carvings was inscribed in UNESCO World Heritage List last 1999. Quoting their brief description:

“The steep hillsides of the Dazu area contain an exceptional series of rock carvings dating from the 9th to the 13th century. They are remarkable for their aesthetic quality, their rich diversity of subject matter, both secular and religious, and the light that they shed on everyday life in China during this period. They provide outstanding evidence of the harmonious synthesis of Buddhism, Taoism and Confucianism.” 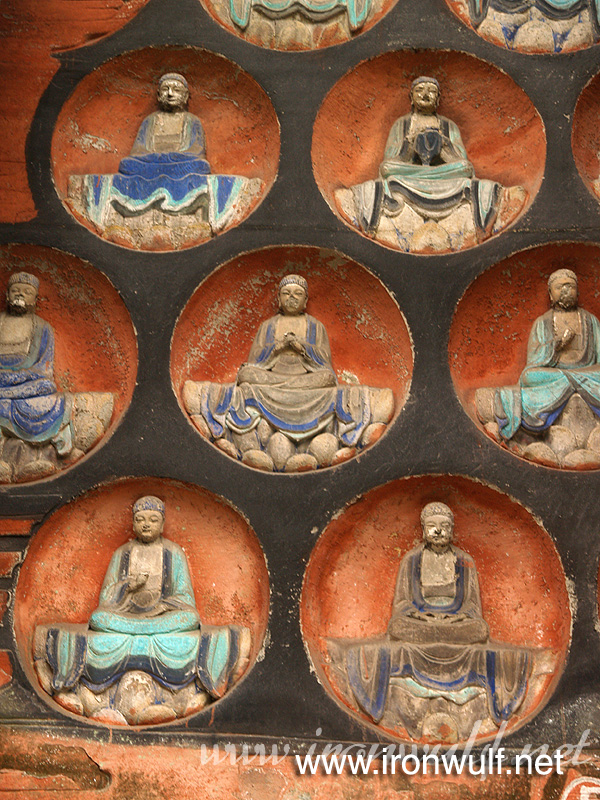 Dazu Rock Carvings are made up of 75 protected sites containing some 50,000 statues, with over 100,000 Chinese characters forming inscriptions and epigraphs. And for a a stone art dating back as 9th Century, I am pretty impressed that most of these are still well preserved. 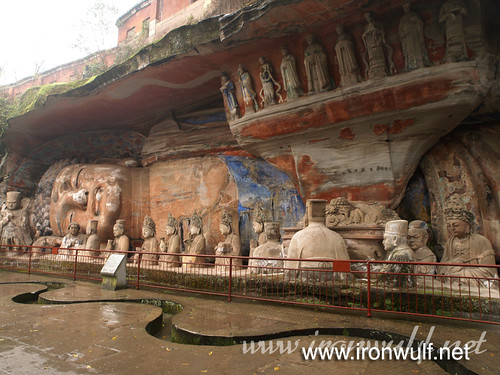 At that time, we only have a few hours to inspect the carvings and we were shooting away like crazy. But if I find a carving really interesting I try to stop a little and read on the description. Most of the carvings here are their expression to Buddhism. I just can’t help but admire the details of each carvings, the intricacy on the patterns and the colors used as well. 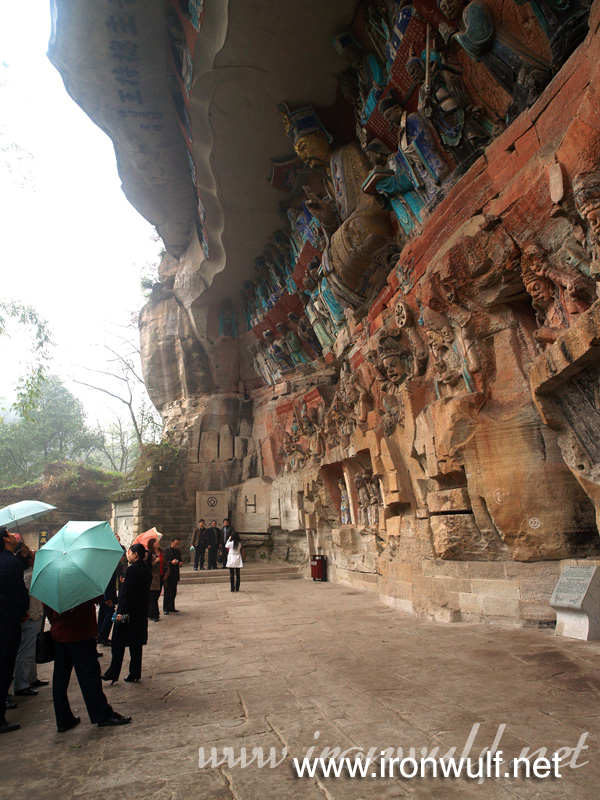 The whole U-shaped hill is like a giant picture book of stories. Each section from right to left is a depiction from Chinese text carved on the walls. Some depicted their daily life, their spirituality and also their leaders. Aside from the cliff carvings, there is also a cave there with more statues and carvings but photography isn’t allowed in that area. Better watch out, there are security cameras everywhere. 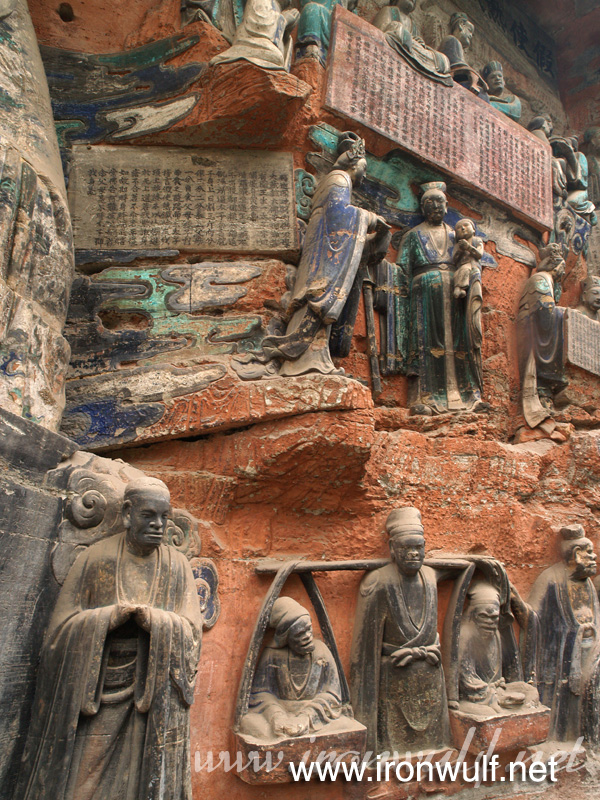 A Story from the Scripture on the Kindness of Parents 父母恩重经变像

At that time, since it was already late in the afternoon, there weren’t too many tour groups in the area so we were able to enjoy these carvings more. If one is in the Chongqing Municipal, a visit to Dazu Rock Carvings is highly recommended as I am equally impressed with the rich details put into these ancient artworks. 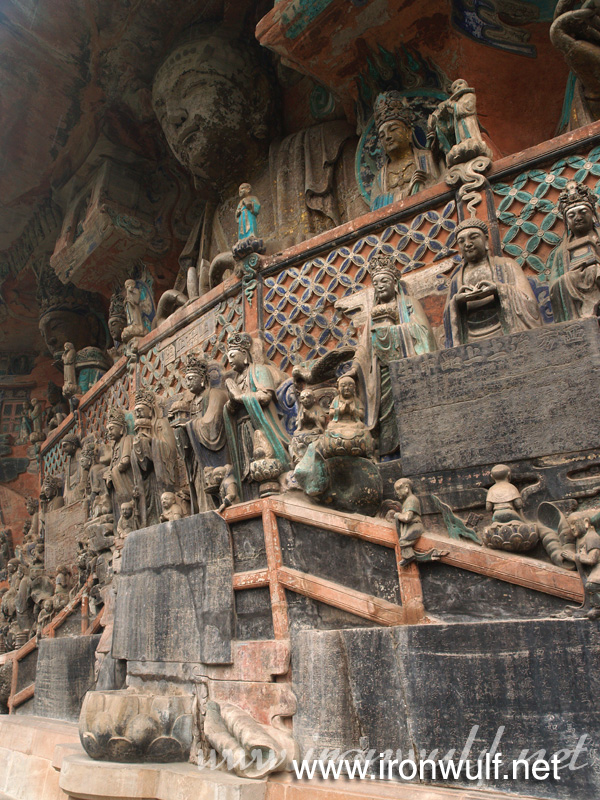