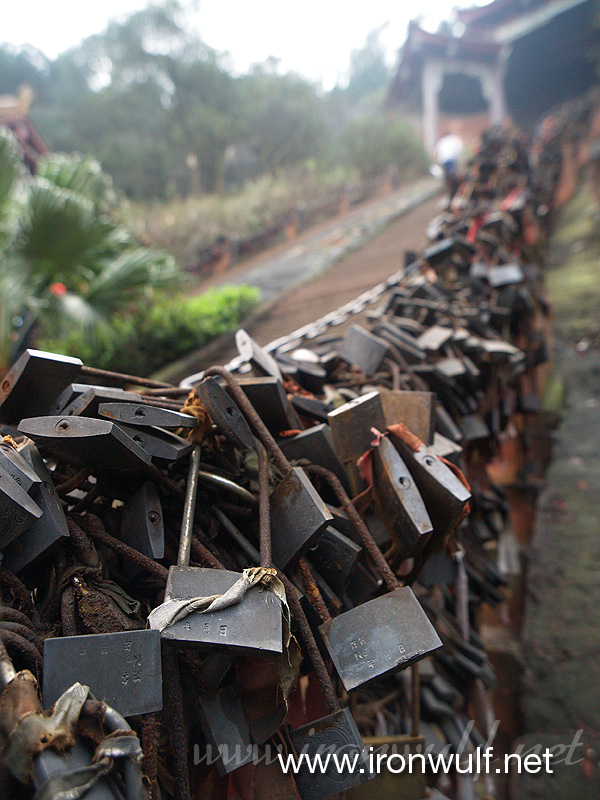 Locks of Prayers and wishes at Leshan

We only spent a night at Chongqing and the next day we moved on westward to Leshan. Found at the south west portion of Sichuan Province, Leshan, which means “Happy Mountain” is home to a pair of another UNESCO World Heritage sites. Both sites Emei Shan and Leshan Giant Buddha are a mix of cultural and natural scenic areas. Our first stop was the latter. So after checking out of Nanbin Youth Hostel, we went out to the rainy morning streets, took a cab back to Caiyuan Ba Bus Station. 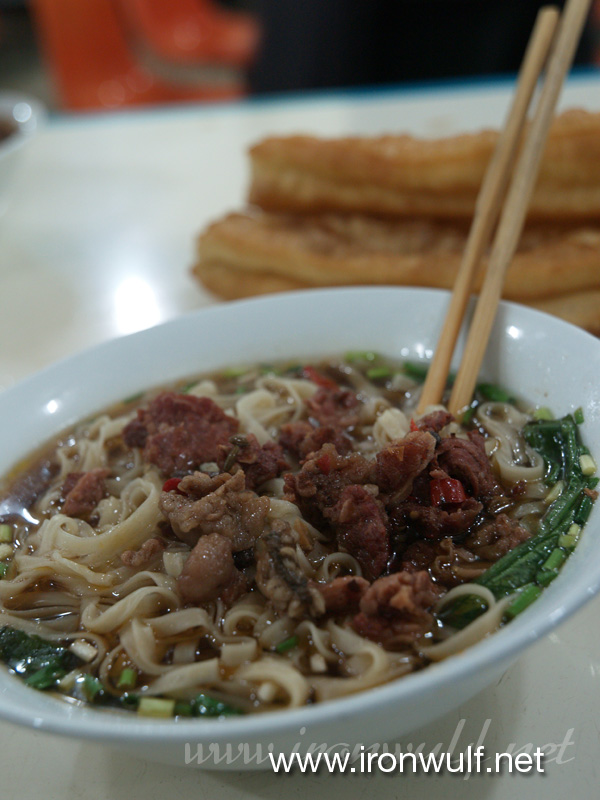 We got a bus to Leshan which leaves at 9am costing RMB 119. Since we had a bit more time, we decided to get breakfast at one of the eateries near the area. I ordered a beef noodle, then I got curious with a pie like food they have and ordered one. It was a Youtiao or a “Dough Stick”. Well basically it’s just a type of bread. Mix it with your noodle meal you’ll get a heavy meal. Also, I noticed that there are still a lot of shoe shiners here. There were this group of teens who had their shoe shined inside the eatery. 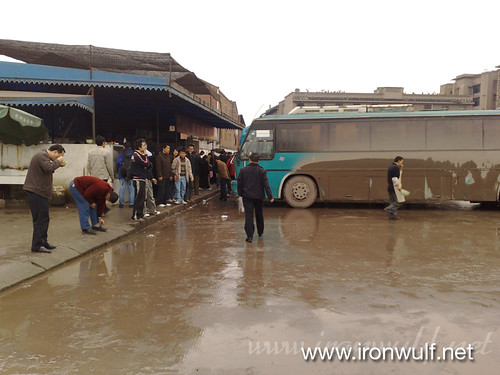 The bus left on time and we moved through the city as I watch the rain drenched city pass by my window. The provincial buses here in China doesn’t have air conditioners since its already cold. Soon the scenery changed from city to a pastoral scene of the countryside. Low houses and fields. I was amused by the scenery since its different from ours. If we have rice fields, there were these yellow fully bloomed plants neatly scattered along the field. Then dots of slim trees with irregular growth of leaves scattered about. We also passed by rural cities then switch again to countryside scenery. 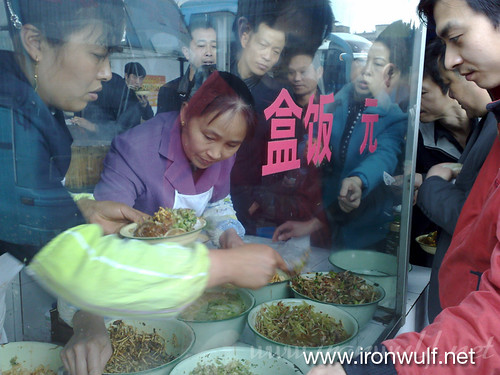 I have always wondered why some of the bus in the cities are covered with mud, thats because some of the roads are not cemented. When we had a brief stopover for lunch, most of the buses were already painted with mud. Probably why my window suddenly turned opaque. I joined the other Chinese who huddled for lunch. It was the same lunch we had before. A bowl of rice topped with different ingredients, I’m not sure what they are but I see some veggies, tofu, squids and some spices. Without speaking Chinese and not knowing how much I just gave a paper bill and the vendor gave me a change, the lunch was only RMB 6. Then I bought some drinks on the nearby mini store. 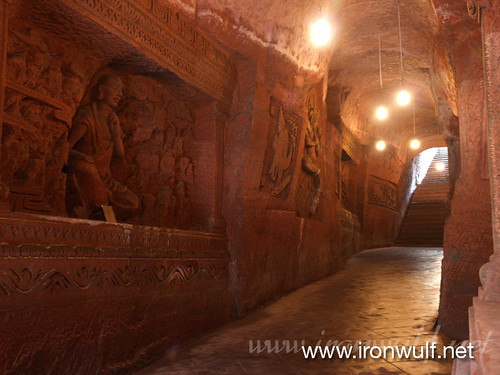 After lunch, the bus rode on. Time ticked on by, there were stops and cities along the way. There’s this city, Zigong which we passed by that I found very interesting because of all the welcome message of “Welcome to the Hometown of Dinosaurs”. They had very interesting display of dinosaur statues and their museum is shaped like Dinosaur. It looks like a fun place. The city got the moniker and became famous for it when vast numbers of dinosaur fossils were excavated at the town. 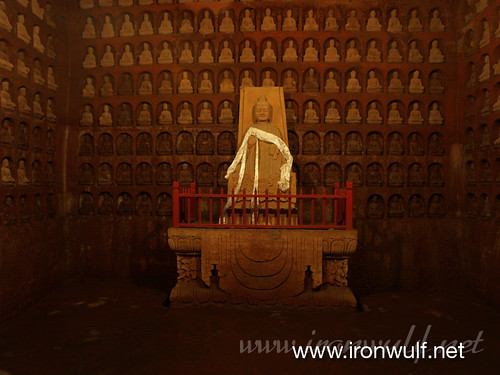 A thousand Buddha on the wall room

It was already near 2 o clock in the afternoon and we still haven’t arrived at Leshan. I checked with my friend’s photocopy of lonely planet to check again if the estimated time was correct. Lonely Planet China said that it’s only a 4 hours bus ride from Chongqing to Leshan but its already pass 5 hours. My friend didn’t bring his lonely planet China book as he found out that there were instances that they were confiscated because the Taiwan region wasn’t highlighted as part of China in their Maps. He just photocopied the pages we needed. 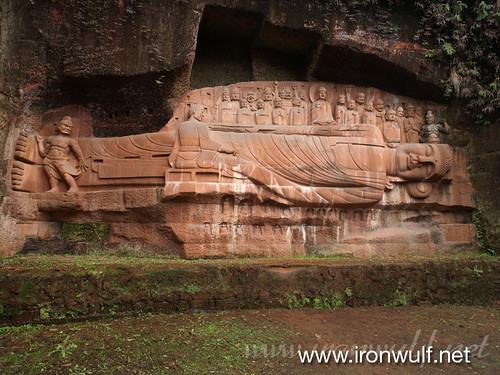 The Sleeping Buddha in Anyue County

I think we arrived by 2:45pm in Leshan. We were welcomed by a sunny weather there which made us look forward to shooting with nice lighting. The lady there told us that there’s a van coming that would take us to the Leshan Grand Buddha Park. When the van arrived, we realized it was just around the corner and we could have walked it out. Good thing it only cost RMB 1 for the ride. 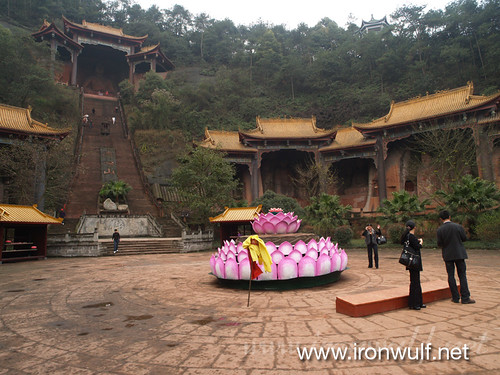 Finally, we have arrived at the entrance of the Leshan Grand Buddha Park. We payed the entrance fee of RMB 110. It’s actually only RMB 70 for the park, but to gain access to the Grand Buddha there’s another entrance ticket of RMB 40. And since we still got our backpacks with us, there’s another 15 RMB for both of us to store our bags at the Tourist Center. We left our things and went on to explore the park. 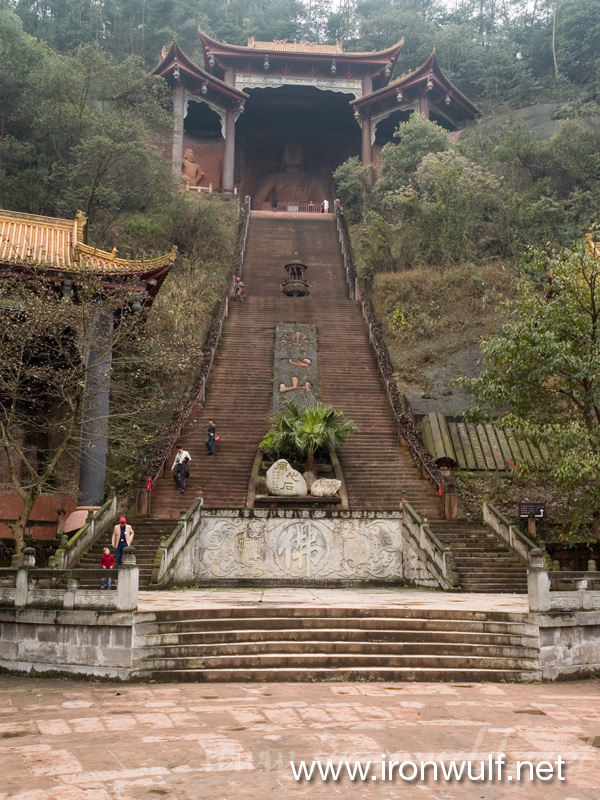 Before heading into the actual Grand Buddha, you have to pass by several trails first. There’s this tunnel with very impressive bas reliefs of different Buddhas. Then it struck me that I left my tripod attached to the bag. Anyways, didn’t want to waste time I just tried to shoot as steady as I could and bumped up my ISO a bit. 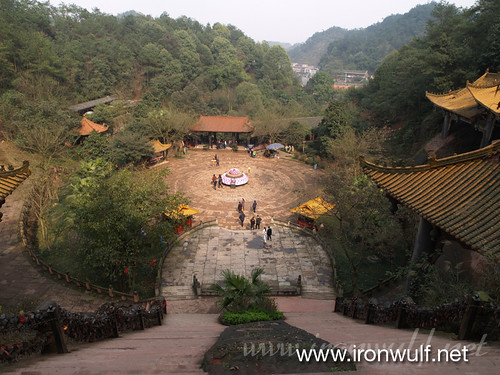 View from the stairs

After passing by the tunnel, there are several caves on the right side. Not as impressive as the reliefs on the tunnel, but what interested me was the room full of Buddha Patterns on the wall. Also placed on those caves are souvenir shops. Then moving on by climbing a few flight of stairs, we found ourselves on a circular area where several giant Buddhas are carved on the mountain walls and in the middle is a long flight of stairs. When I arrived there, I saw a few Chinese doing their prayers by bowing, kneeling and waving their incense sticks. 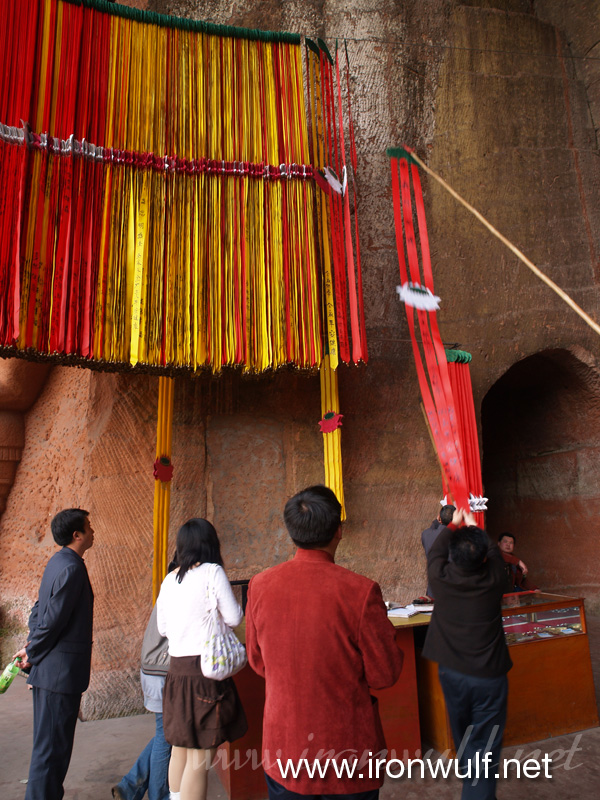 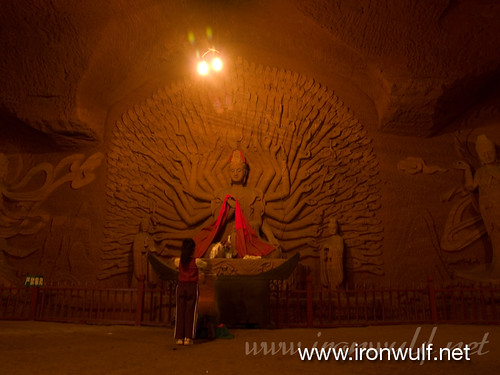 I climbed the stairs and found a nother large sculpture of Guanyin Buddha. On the sides there where prayer banners, candles and incenses available for worship. An ethereal music was also playing loudly which seems to add a solemn and sacred feel to the the atmosphere. I caught some Chinese there putting up some prayer banners. Before they hang the banners, they wrote some Chinese characters first, which I’m guessing could represent their wish. There are also several colors there which could also have other meanings attached to it. 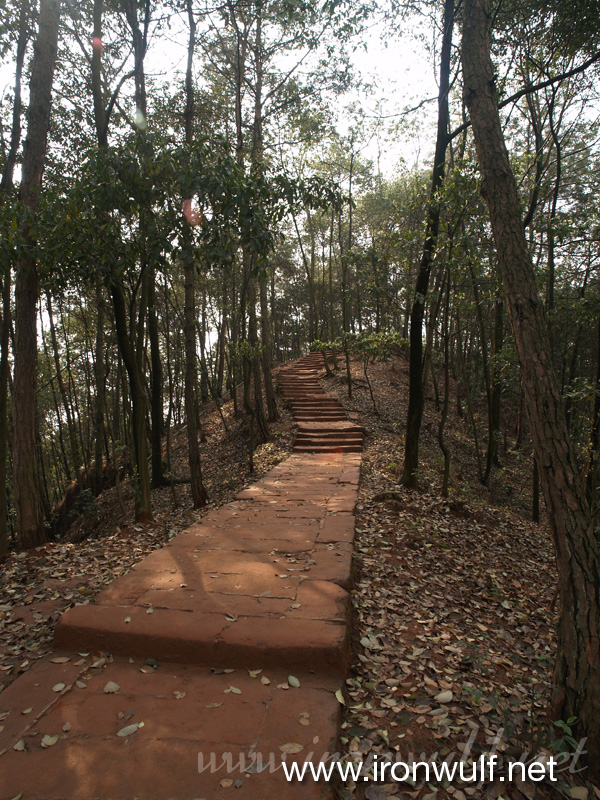 The Trail to Leshan’s Giant Buddha

On the right of the Guanyin Buddha after climbing the stairs is another tunnel cave. There are more images of the Buddha there but what was interesting was the one with a thousand arms. Passing through is an open forest trail where you’ll have to walk for several minutes before you reach the entrance gate to the Leshan Grand Buddha.