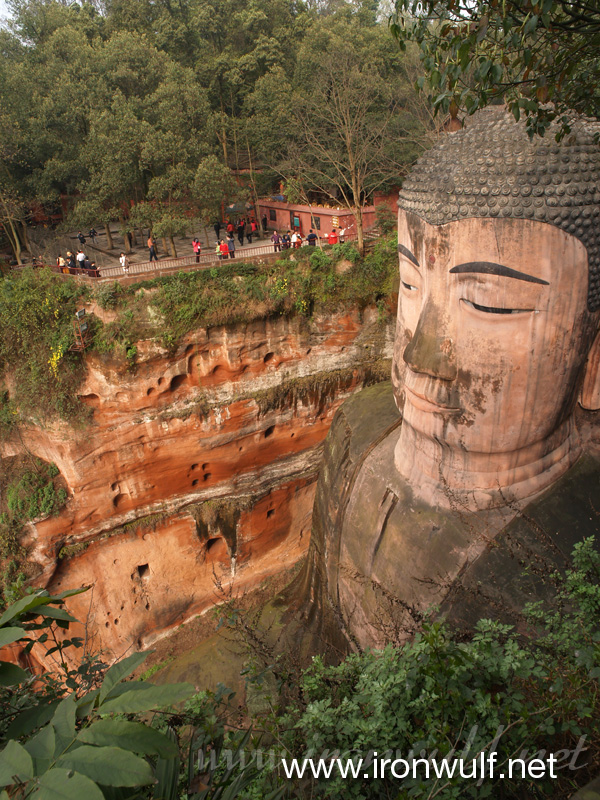 Continuing on, from the Leshan Buddha Park trail, we are now headed to the actual site of Giant Buddha. The Giant Buddha was carved beside the red sandstones of Mount Lingyun at the eastern part of Leshan City in Sichuan facing the Dadu river. It is still part of China’s Mount Emei Scenic Area and Leshan Giant Buddha Scenic Area UNESCO World Heritage Site. 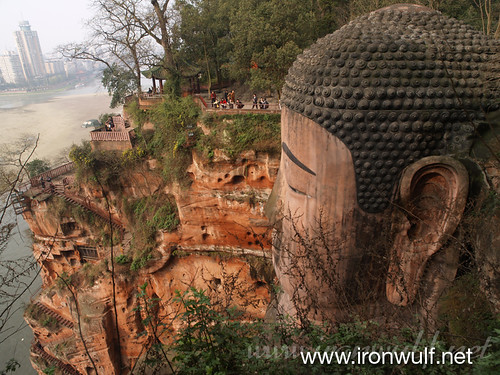 Before entering the viewing area, there is a RMB 40 entrance fee. You may opt to pay this at the gate entrance and if you haven’t, you can pay there as well. Off to the right, after the entrance, passing by a few flight of stairs, an old teahouse restaurant a small fountain and a temple, you’ll finally find yourself face to face with Leshan’s Giant Buddha Profile with a heavy-lidded eyes facing the river and the city. 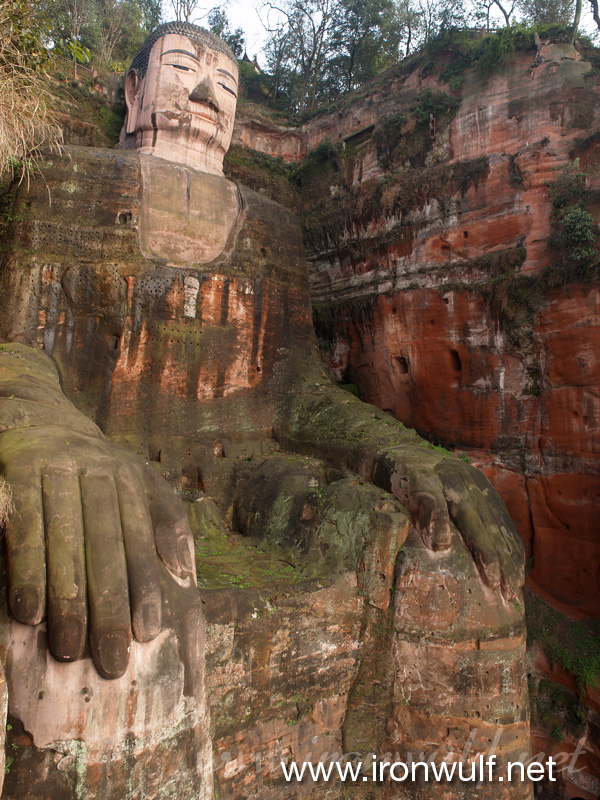 The sight of this huge Maitreya Buddha sitting on the side of mountain is really spectacular. This statue, standing at 71 meters (233 feet) is the tallest stone Buddha Statue in the World. Even the individual curl of his hair is like a yard long. Taking my GPS reading from the level of his head, I got the following: 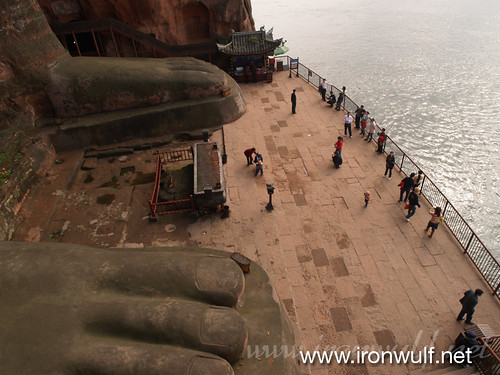 There’s an interesting bit of history on how this was built. The idea of building this Buddha came from a Chinese Monk Haitong who believed that a Buddha would calm the turbulent river waters which has caused a lot problems from shipping vessels. The monk was said to have gouged out his own eyes to convince the authorities of his deep sincerity to continue with the project when he learned that the funding for the project was jeopardized. 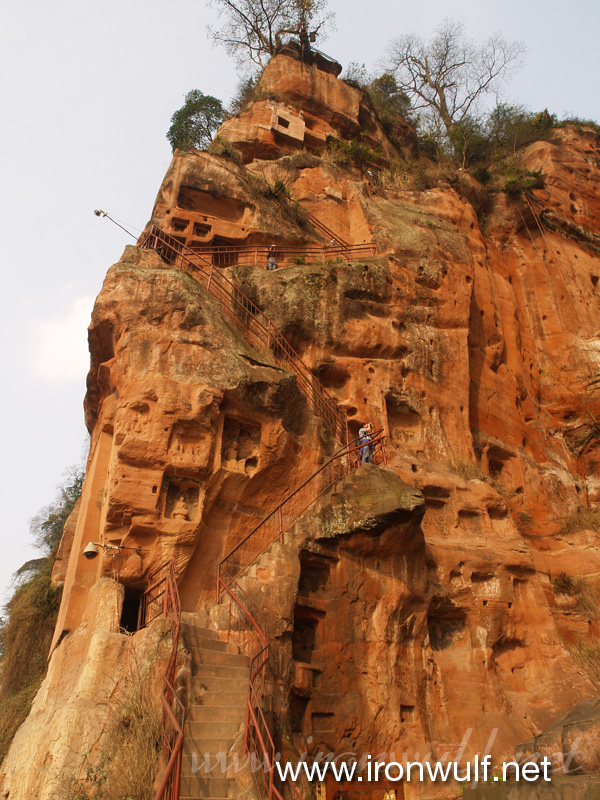 Fortunately for the monk, construction on the Giant Buddha began in 713 AD and took 90 years to be finished by his disciples. And due to the excessive amount of stones removed from the mountain cliffs that were deposited below the river, the waters indeed calmed down. Making the confluence of the rivers a safer place for passing vessels. 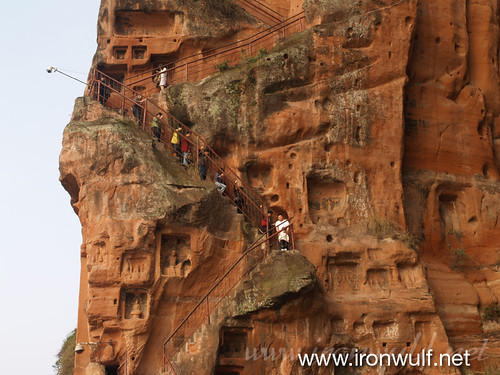 We decided to climb down the steep cliff stairs. It’s a good thing they placed some rails there as one could easily suffer from vertigo going down its narrow path. I also noticed that the cliff sides as well had some interesting sculptures and reliefs to compliment the Giant Buddha as well. 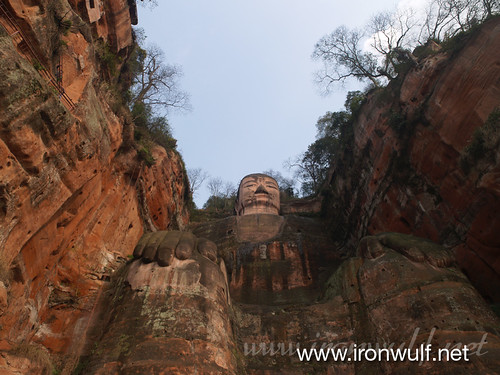 At the foot by the river, you’ll certainly see how towering this statue is, I actually felt like an ant down his feet. There were some signs of degradation from the statue as well. Sadly, pollution had smeared its nose literally, good thing the city enforced that factories there be closed down and rehabilitation of the site done regularly. 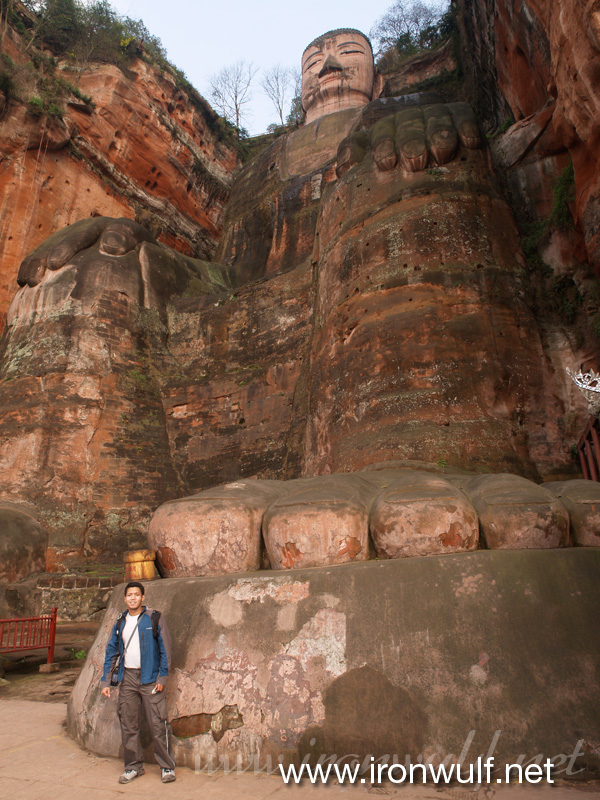 From the foot of the Giant Buddha, you can see the city skyline of Leshan. Also across the river are dots of people who are admiring the Giant Buddha from afar. Actually, from that point, you could see some of the sculptures at the side of the mountain you won’t see when you are at the actual site itself. 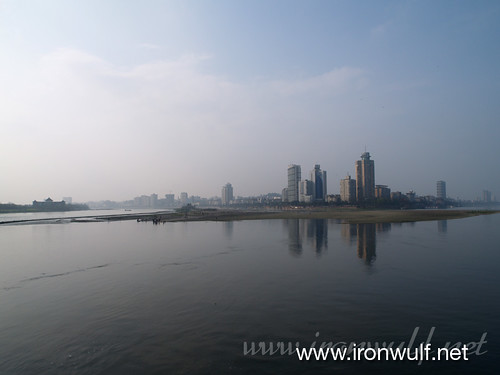 After taking pictures and admiring the site a bit, we moved on since it was getting late in the afternoon. There’s this cliff side trail on the other direction from the trail going down the cliff. The pathway is also very scenic as you can see some limestones and cliff side views of the mountain. 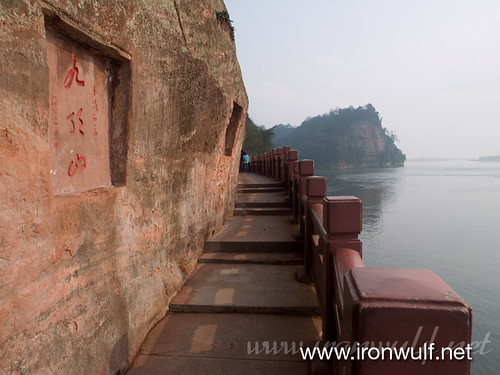 There are actually some other sight seeing spots there like the Lingyun Temple which we didn’t manage to visit since we were a bit pressed for time. We retraced back to the same trail going there and finally arrived at the etrance gates. 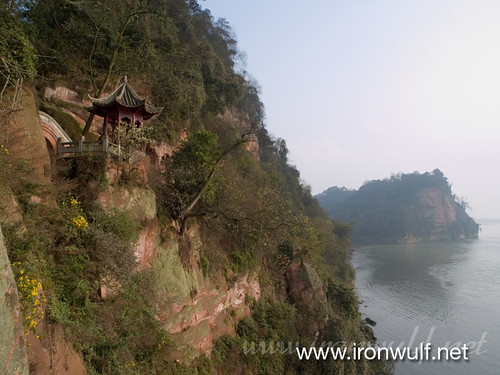 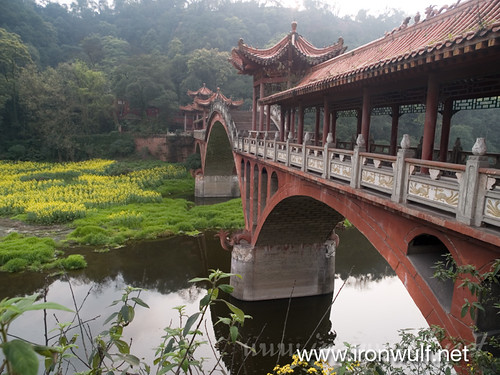 At the south gate we found this very nice looking bridge that my friend was actually looking for. We got lucky we found it in this part. There were no other passengers there so we had the mini van to ourselves for RMB 20 each. I think the ride took about an hour. I didn’t notice much as I was dead tired and was close to drifting to sleep at the back while they were talking about China Politics.