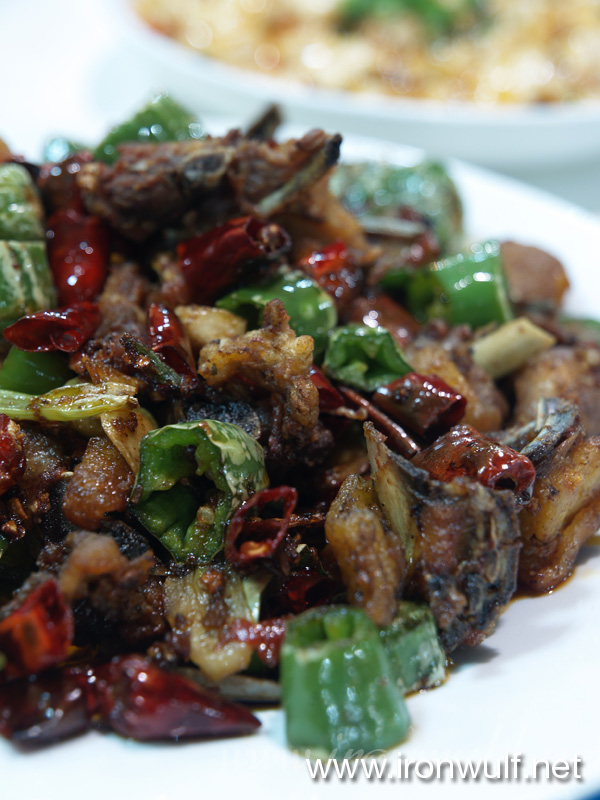 The drive from Leshan Giant Buddha Park to Emeishan City took at least an hour. I didn’t notice much since I was half asleep during the ride and didn’t see much of the way. I noticed that gasoline prices here are very cheap that’s why most transpo here are cheap as well. They said that the government dictates the prices of their commodity that is why as I remember. When I came to, we were entering a small street with eatery at the side. I was told that we were gonna check out this recommended hotel by our van. So we did out of courtesy. 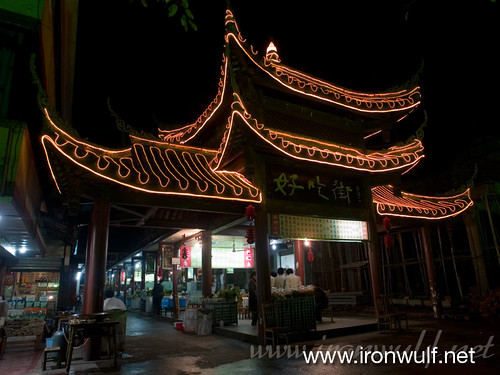 The hotel’s name was Li Min, and one of the person who accompanied us in the van was part owner of the place so we did check out. Normally, I’m impervious with these kind of things as one is not really obligated to stay on a recommended place as it is a ploy with these transpos sometime. Anyways, I guess I just wanted to rest and eat that’s why we did check in here without even seeing the room. Which is personally a mistake as I didn’t really like the place. Room was just ok, but piping inside the bath is bad and the place isn’t homey. And previously before checking in, they also have this affiliated tour group which was offering a service package for the Emeishan Tour. I told my friend to just hold on to the decision later and let’s just eat first. 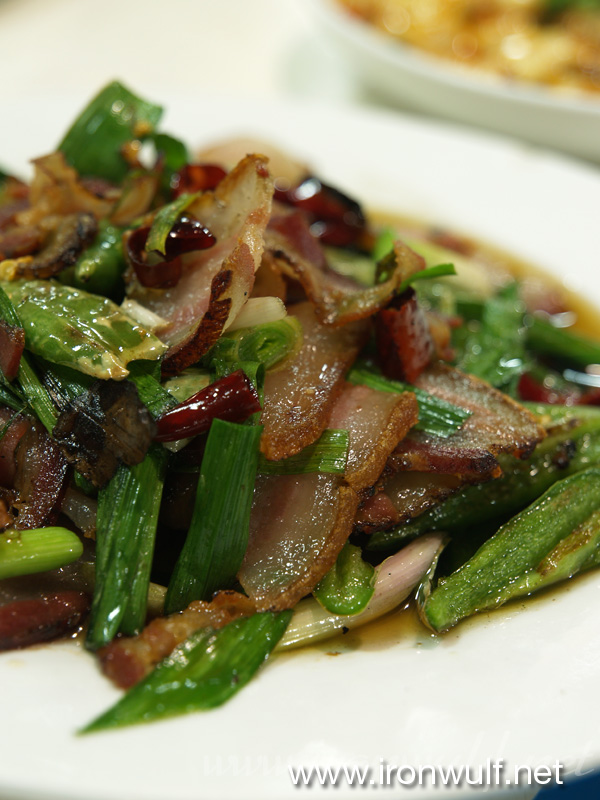 We came into a decision not to take the package later as the only advantage there aside from getting your own bus tickets was the food. It was a ploy for them to sell their food with the given price. That evening, we didn’t eat at their restaurant and decided to eat outside at the food strip. I was excited to taste some authentic Szechuan Cuisines. 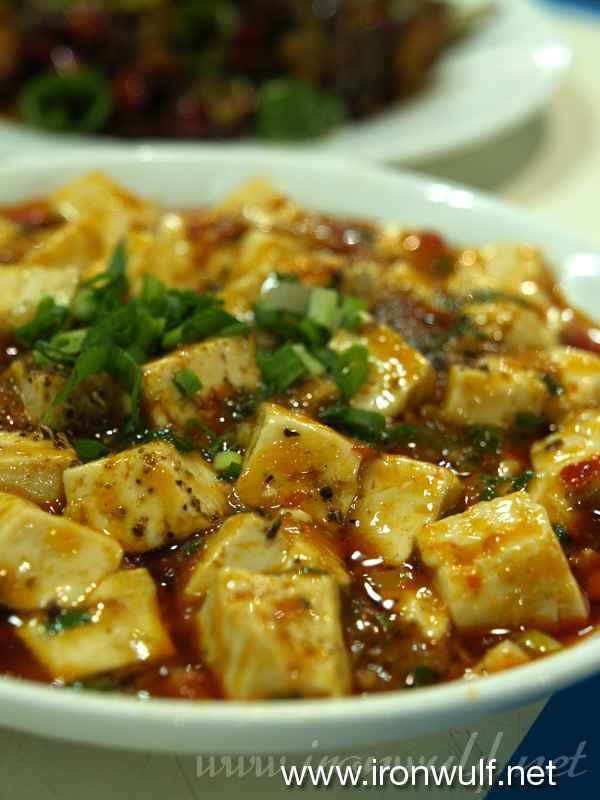 Szechuan Cuisine originated here in Sichuan Province in China and known for their fiery and numbing taste. The numbness was attributed to Sichuan Peppercorn which I had a pleasure of first tasting in Chongqing. Temperature here in Sichuan averages around 12-16 degree centigrade and could go lower during winter season. So I think it was fitting that people to create such cuisine which will help them keep warm during the cold months. 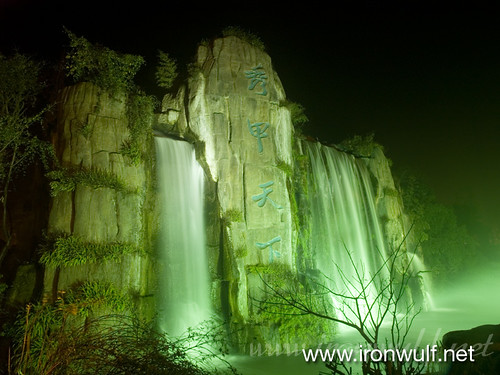 We were able to order 3 dishes; a Shredded Chicken, Bacon Bits and Mapo Tofu. The Shredded Chicken was my fave. It can be annoying to eat at times since most of the meat have bits of bones, but I soon learned that they cook it that way since the tastiest part of the meat are closest to the bones. The bacon bits was a bit fatty but it was okay and tasty. The Mapo Tofu was a bit of a disappointment. I was expecting more. Anyways, I still have to taste the original Mapo Tofu dish from restaurant where it originally later. As expected, most dishes were spicy, it goes well with a coke soda. 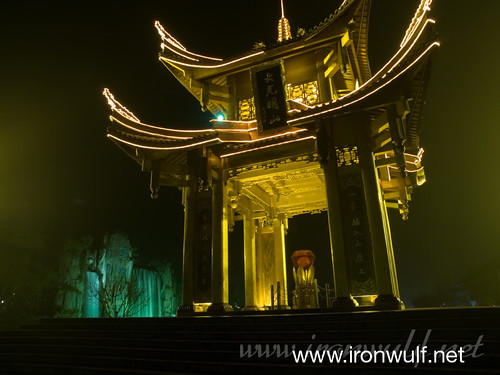 After dinner, we only got to explore by foot the nearby areas of Emeishan City. Just a walking distance is the Emeishan Monument where you can see a ruby lotus monument with an Heritage site logo inside it. Also nearby are two man made waterfalls. The city got its name from the mountain itself since it is located at the foot of the mountain and is the usual jump off point in the area. Taking a GPS reading, the city is located 464.5m above sea level. 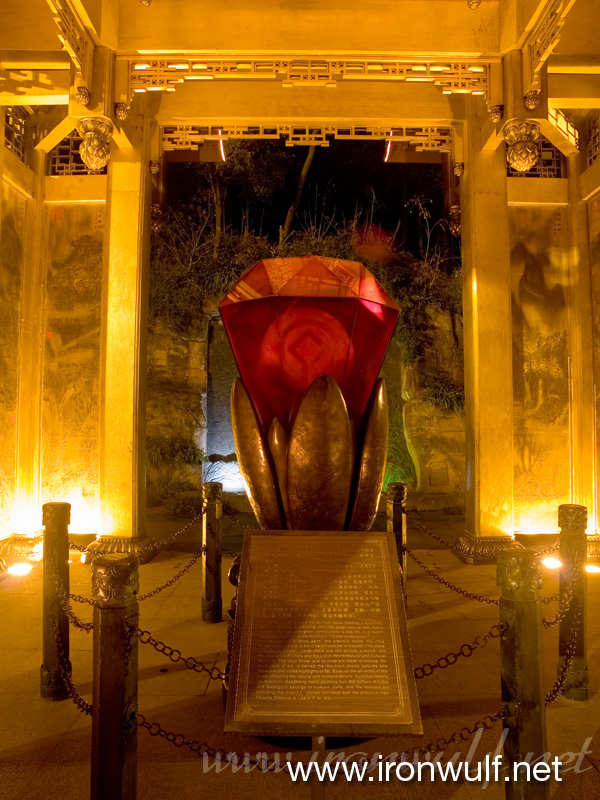 We capped the night early since tomorrow would be a long and exciting journey up the mountains and we plan on checking out of the hotel early morning and move to where we were supposed to lodge in. 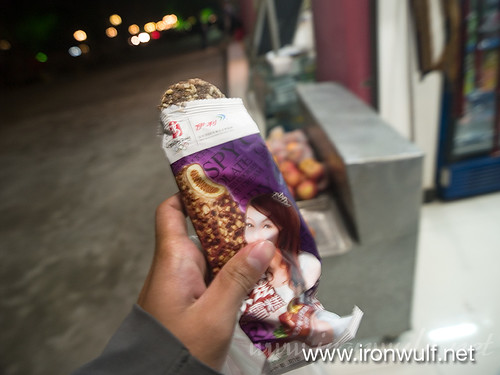 I also got to try their local ice cream I don’t know their brand, but its delicious. I know its already cold, but I’m craving for a dessert.