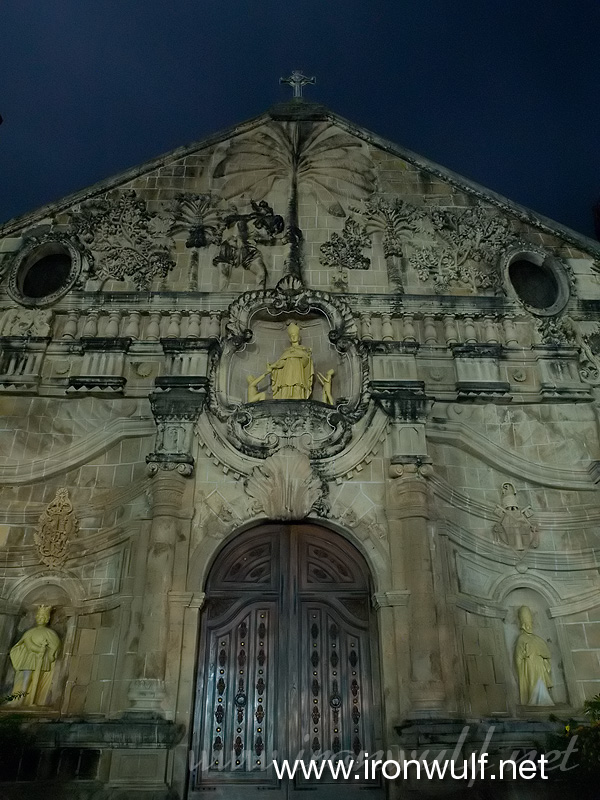 One of the must-see places when you visit Iloilo province in Panay Island is the Santo Tomas de Villanueva Church or most commonly known as the Miagao Church. This church is one of the four Baroque churches in the Philippines inscribe in UNESCO‘s list of World Heritage Sites. On our first day in Iloilo City, the coastal town of Miagao was our first top where we stayed with our kind host Tita Linda. 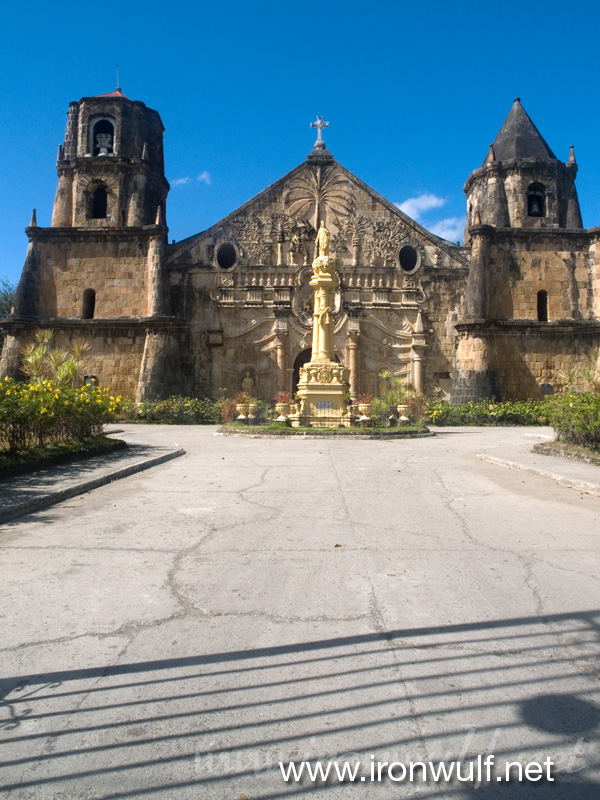 Going to Miagao is quite easy. Coming from the spanking new Iloilo Airport, we rode an Airport Shuttle which dropped us at Molo, nearby the Molo Church. From here, there are regular jeeps plying south of Iloilo. It’s hard not to miss and people will point you to it if you ask. The jeep fare is Php40/ pax and would take 45minutes to an hour ride. From the road approaching the town you could already see the church. You can alight there directly if you want. 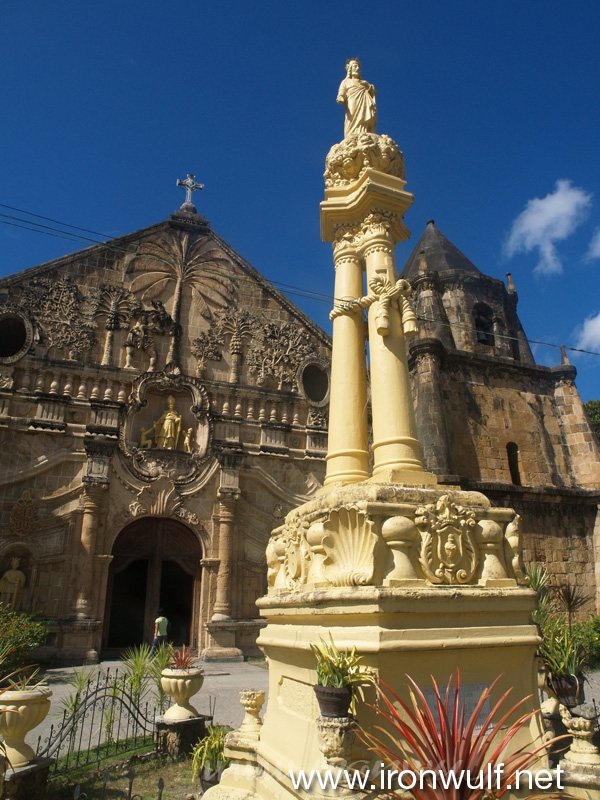 From afar, the golden facade of the church already stands out from the town and looking at it up close will impress you more. We held on to our excitement when we got there as our priority was to find Tita Linda’s place. A tricycle ride took us to her house and found that it’s very near. Seems like a block away from the church and easily walkable. After we settled our stuffs and paid our homage to our host we proceeded to take photos of the church. 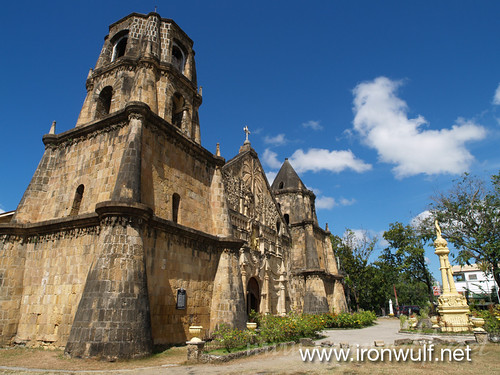 There are already so many details about the history of church in the internet so I’ll try to make a brief recount. This church was built between 1787 and 1797 under Francisco Maximo Gonzales, OSA. The design has a two fold purpose, one as a place of worship and the other as a fortress of protection against the invading Moro Pirates. 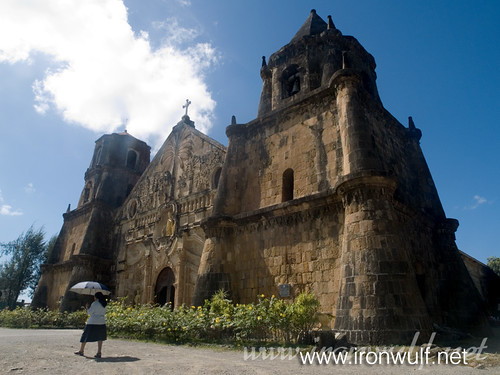 Among the Philippine Churches, Miagao may have the most artful facade. it was quite unusual to have an Aztec-like bas-relief of St. Christopher Carrying the baby Jesus in a Tropical forest. And the large coconut tree at the top central of the facade may symbolize the Tree of Life. Other themes of the bas-relief are the daily life of the town’s people as well as the local flora and fauna. 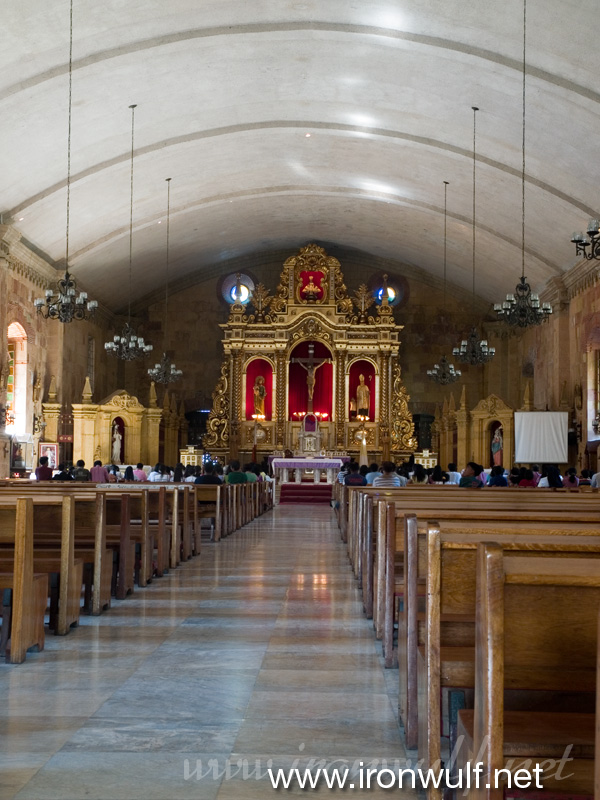 The Church walls was said to be 1.5meters thick and made from glued limestones and egg whites since there weren’t any cements at that time. The two flanking bell towers on the side which also doubles as a watchtower were made in different times, the left tower when facing the church is older than the other. 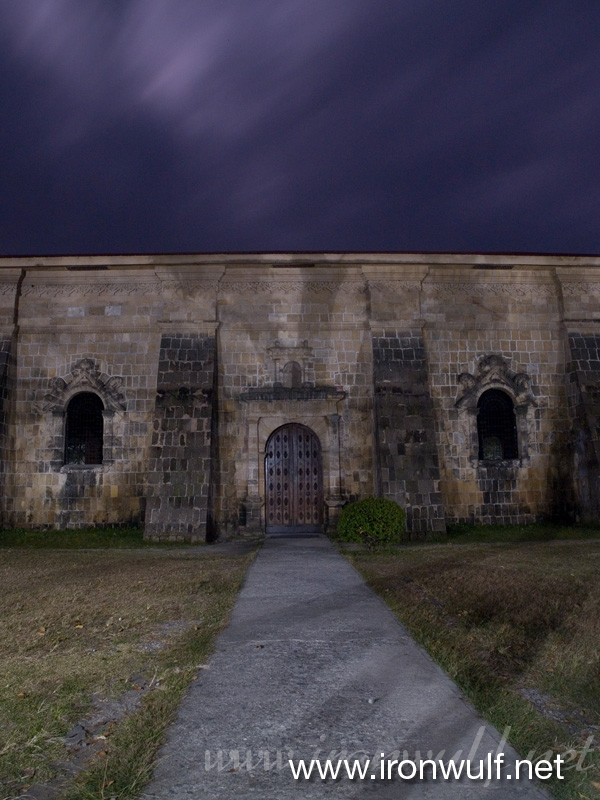 Truly, this is one of the Philippines Architectural Gems. It’s imposing structure, symbolizing power and strength will captivate you from a distance and up close. It also represents Filipinos Artistry in its bas-relief. With its popularity, Miagao may also be one of the most photographed Churches here in the country so capturing a new angle can be quite a challenge here. 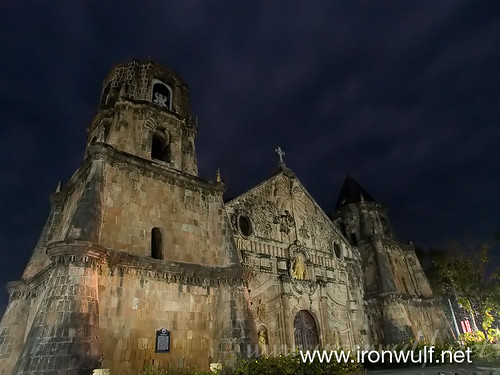 At night, with only the glow of ambient light to reveal the details, the mood somehow changes. Powerful and looming yet a bit darker in feel.

Just a technical note: My Olympus E500 camera here struggled to take long exposures up to 5 minutes. It isn’t really its strength as the longest it can hold in bulb mode is up to 8 minutes, unlike the newer models which can take up to 30minutes. Aside from that, the processing time of the camera doubles. So in between, you can either chat with your friends or grab a burger at the nearby 24 hours burger stations. Resulting image also has some visible banding and noise so I had to run the images here through a noise reduction software (neat image). I wouldn’t recommend my cam for exposures longer than 3 minutes, but for regular use I think its still stellar camera for a 2005 model.