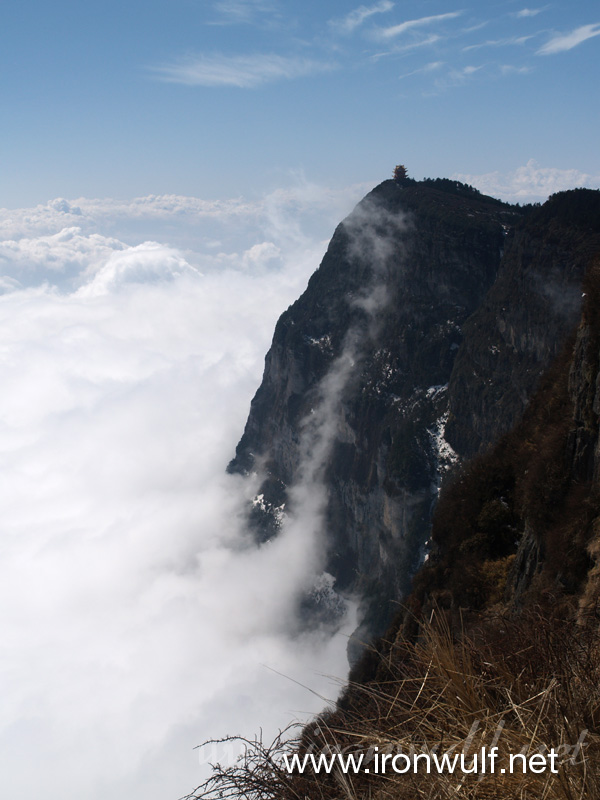 The word Emeishan literally means “Delicate Eyebrow Mountain” describing the quality of its two peaks at the summit. Continuing from where we left, alighting at the Cable Car Station, it is still a few minutes hike at the altitude of around 3000+meters above sea level. At that height, even with the sun already high up in the sky beating down on us, the temperature was still cold, but still bearable enough without a gloves if have high tolerance for the cold. 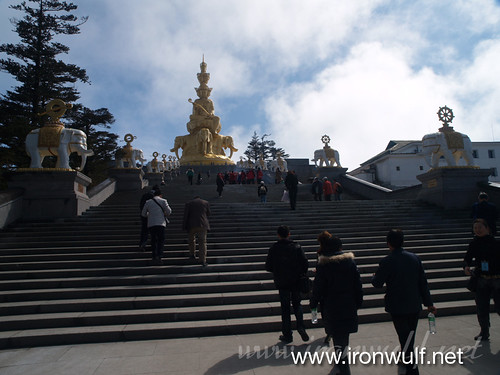 Stairs to Jindang (The Golden Temple)

We passed by several souvenir shops and restaurant on the trail. There was also a lodging house there where you can spend the night. Originally, we planned on spending the night here near the summit but our plan had to change since we didn’t expect the long bus ride going to Leshan from Chongqing. The sunrise among the sea of clouds was said to be spectacular. 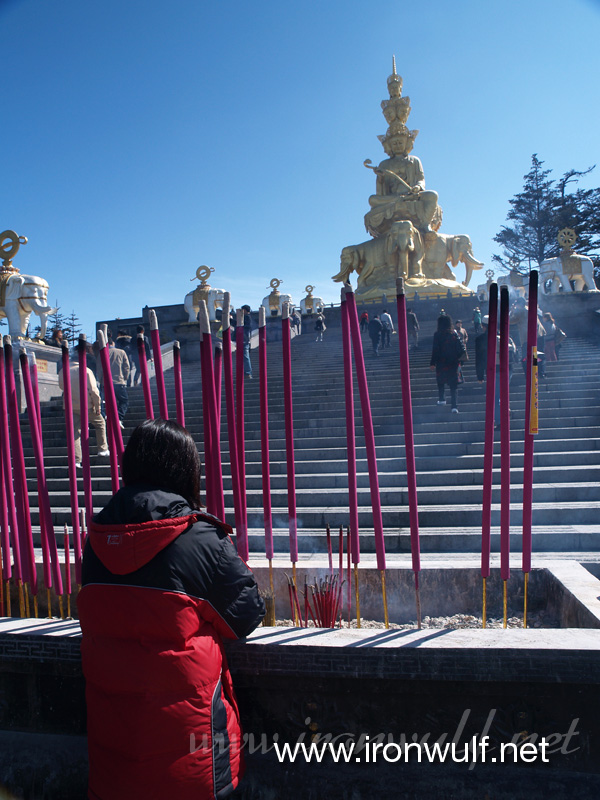 Incense and a Prayer

As you approach the summit, you’ll already see the towering Ten Directions Pu Xian Buddha at the distance. It’s golden color cutting the deep blue sky at that time. And being one of the 4 Sacred Mountains in China, aside from the regular local tourists, there were also crowds of pilgrims who climb the mountain. 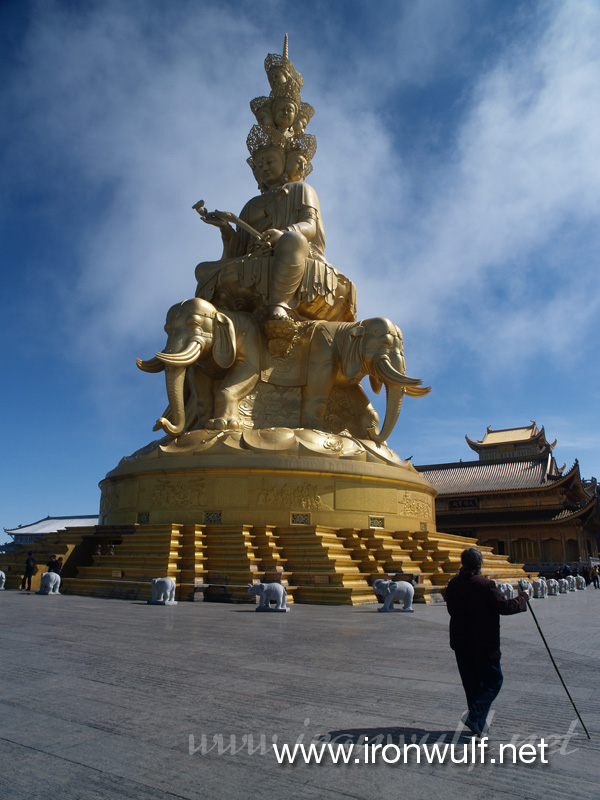 The Ten Directions Pu Xian Buddha is an amazing structure. I am really impressed on how the Chinese developed this area. Being 3022m in altitude, I’m guessing these structures took some time to build. Just behind this gigantic statue is Jindang or the Golden Temple Summit, the main worship area. 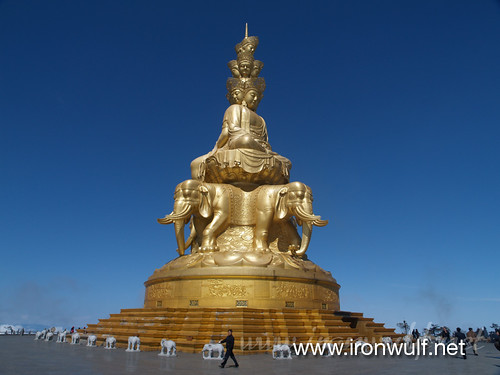 Before these new modern structures were built, the mountain has been inhabited since 10,000 years before. Originally a Taoist retreat, by 3rd Century AD, eventually became a Sacred Buddhist Mountain. A medicinal plant farmer by the name of Pugong, built the first Puguang Hall on where the Golden Summit is now. 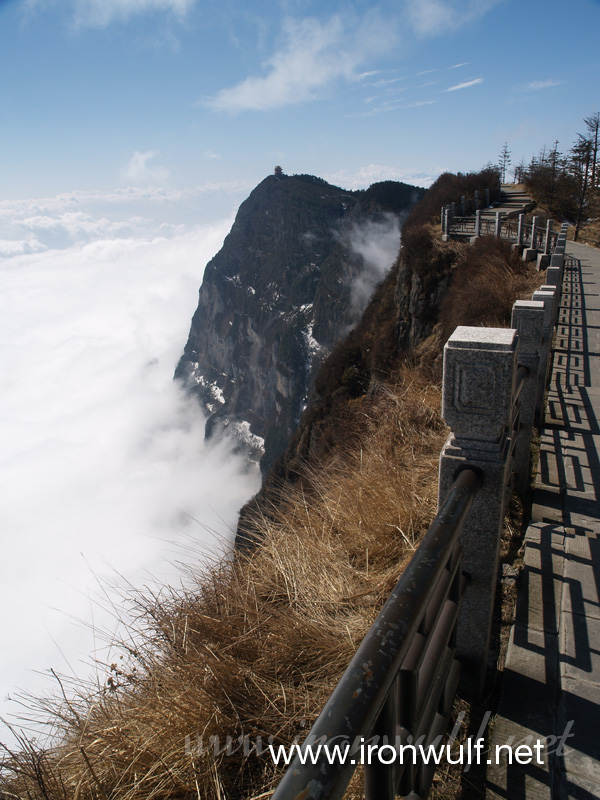 Not being a Buddhist myself, I can only observe what the Buddhist there was doing. Aside from lighting some incense and some prayers they also have this bowing ritual facing the main altar at the Golden Summit. Seems to be a very important practice that they have to document with a photo. 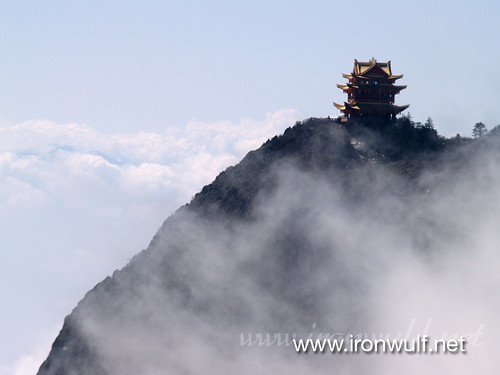 Going behind the Golden Summit temple is the Jindang View Deck. From there, its already 3051m, on the left is the highest point of Emeishan, the Wanfoding Peak or the Ten Thousand Buddha Summit at 3,099m. I can only imagine seeing this early morning with the golden light striking the sides of the mountain. But right now there are several clouds rising from the ocean of clouds and sometimes mist covering the summit. Still scenic the way it is, like a giant Chinese painting came alive from canvass. 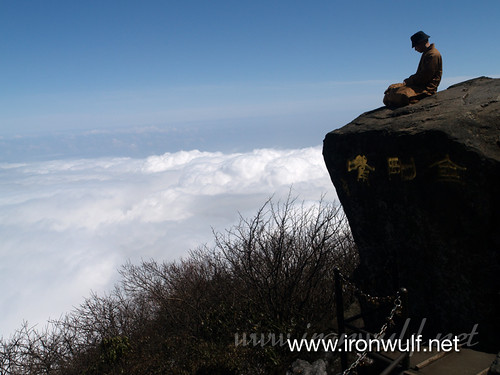 It would have been great if we could go there at the highest peak but the monorail connecting to the peak was damaged by the heavy snow last winter so parts of it need repairs. We went to the left side of the Jindang summit where you could see a large white temple known as the Woyun Nunnary. 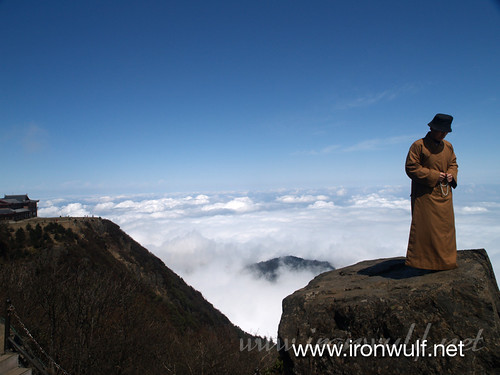 Monk in Prayer Above the Clouds

Going down, just below the Jindang view deck is the King Kong Cliff as inscribed on the stone. In other guidebooks, it’s called the “Cliff of Self Sacrifice“. I chanced upon a monk there sitting on one of the jagged cliffs who seems to be deep in contemplation. I tried going where he was but it was scary just standing there by the cliffs since on the other side, it’s all the way down to the clouds. 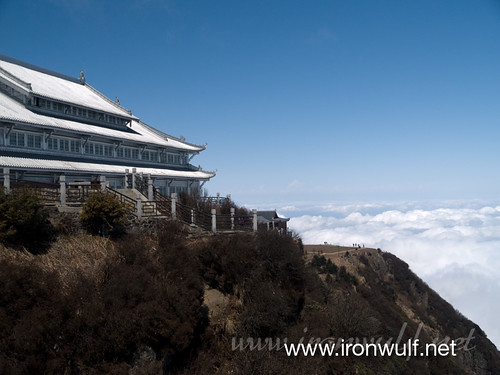 Moving on towards the opposite side is the sunrise view deck. On the rails, are numerous Love Locks. Walking further offers more breathtaking views of cloudscapes. We took a quick lunch of noodles and drinks at one of the stalls there. As expected, prices at the summit is more expensive. The noodles cost RMB 10 and the yogurt drink at RMB 8. 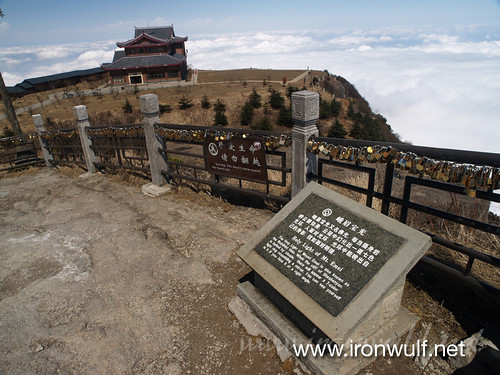 Before we rode the cable car down, I sat at one of the concrete chairs near the station and just stared at the infinite sea of clouds. Just a wonderful feeling with the wind brushing past you while you are lost in the moment of contemplation. Your mind sailing along the horizon and slowly sinking deep at the beauty of nature you see. 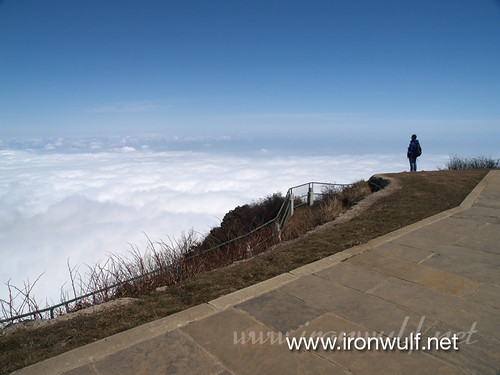 Staring at the sea of clouds