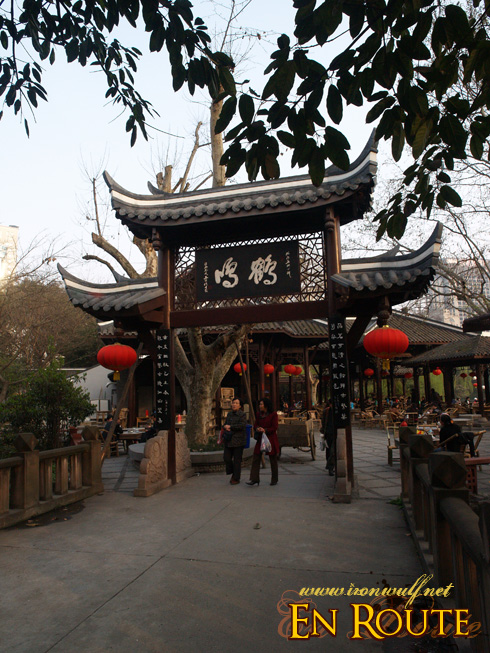 I’ll be trying to post some entries every other day just to catch up on some of my back logs. I hope it would not cause some confusion as I jump from one feature destination to another. It would be more helpful clicking on the tags so you could get an outline of the series. My South West China chronicle hasn’t even reached the middle part yet. I decided to hold it for a while after the quake which hit the area a few weeks ago. Knowing China’s capabilities in infrastructure, I know the city structures there would be up in no time. Still it’s a big hit in terms of people’s condition. 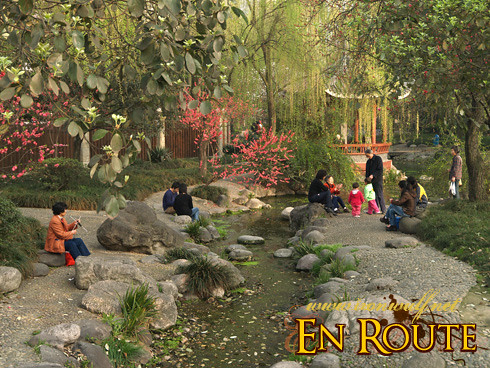 Idyling the afternoon at the park

After descending Emeishan, we were supposed to catch the night bus going to Chengdu. But I had a really bad headache when we got down from the mountain that afternoon. It must have been the altitude. Simultaneously climbing up and down the mountain without proper acclimatization could have caused this. Even some of the passengers at the bus going down were already puking out. I downed an Ibuprofen + Paracetamol I had in my medicine kit and rested that evening. 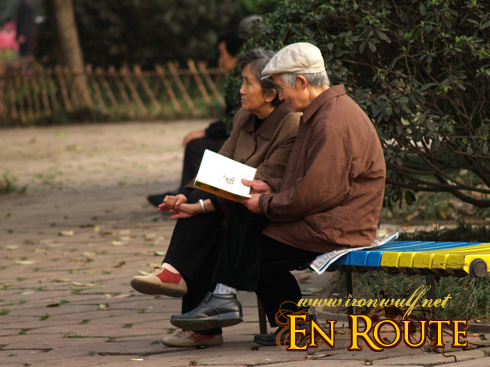 We stayed a night at Teddy Bear Hotel in Emeishan. It’s a really nice place by the way with really big and clean rooms for it’s price. The general manager, Andy, can speak English and the place is really homey. Try also their mushroom dish along with their pork and bamboo shoots. It’s well coked with fresh ingredients. Free wifi is also available at the lobby and dining area. 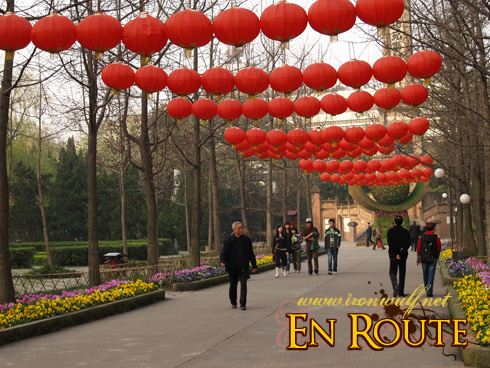 We checked out early the next day to catch the early bus going to Chengdu. Unfortunately we missed the first bus at 8am since it took time from our breakfast. But it was ok, buses leaves every hour and we rolled on the next bus by 9am. What I really liked here in China is that most of the time, buses or any other transportation leaves on time. 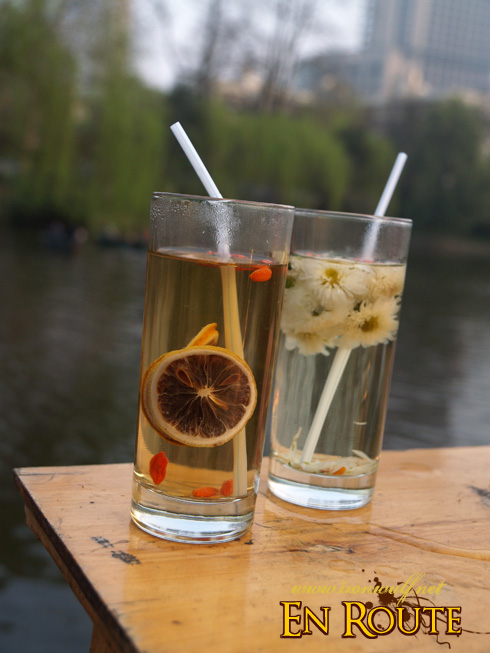 Lemon and Chrysanthemum Tea at the Park

The bus ride to Chengdu from Emeishan took around 2 to 3 hours. When we got down at the city, I let my friend navigate since all the bus signs and charts at the stops were in Chinese. Luckily, it’s much easier to manage here than in Chongqing. Our priority at that time was to reserve our bus to Jiuzhaigou at Chandianzi Bus Station. After a few hops we finally got there and reserved the morning tickets the next day. 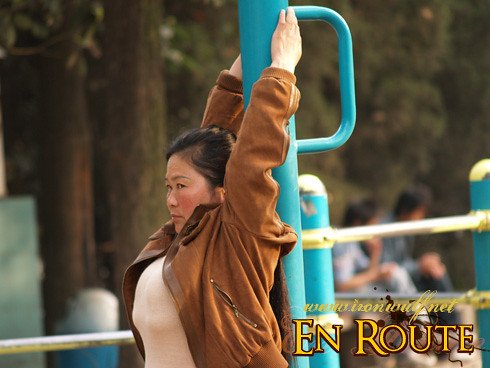 Stretching after an exercise

Next was to find Sim’s Cozy Garden Hostel, a backpacker’s hostel ran by a Singaporean couple in the city. It was funny because we had trouble finding the place. Found out it was inside a building facility and their main sign was being setup at that time since they just moved location. Anyways, it was a very nice place to meet many other backpackers in the area since the young staffs here can speak English very well. 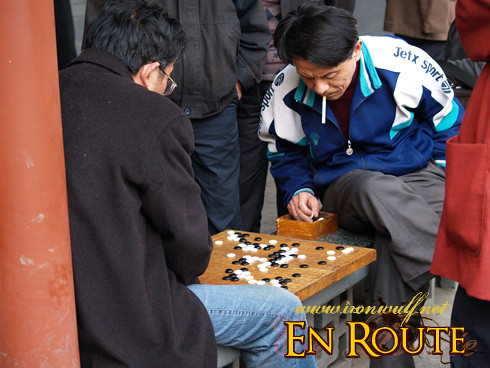 An afternoon game of Go

My friend realized when we got there that we should have just gotten the afternoon bus to Jiuzhaigou instead so after dropping off our stuff we took a taxi to Chandianzi station and re-booked our tickets to the afternoon bus with a little additional charges. After everything has been settled we proceeded to explore the city. 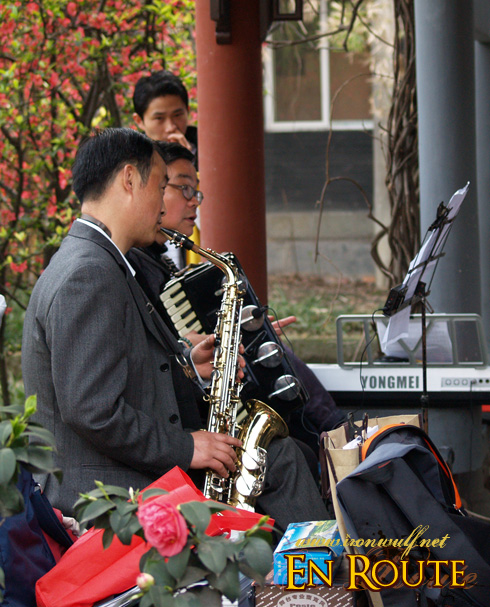 A group of musicians practicing their craft

We just took the public bus since it was really easy to go around the city with it. What’s more, it’s really cheap. Mostly we paid 1 Chinese Yuan where ever stops we go. But as expected, not all buses are really clean. Bus tickets scattered on the floor, again some spits can be found in the area. But I’ve gotten used to this already. 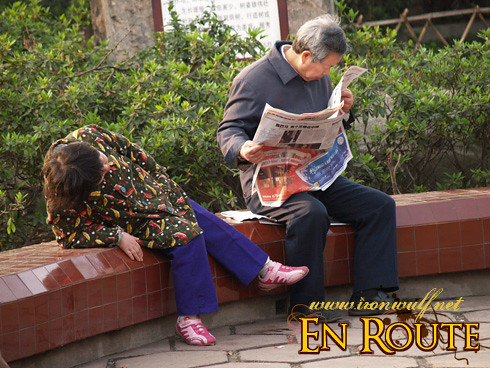 We decided to spend the afternoon at Chengdu’s People’s Park. I thought it would be a nice place to hang out while observing the locals. The park is located within the center of the city, and when we got there, it was bustling with activity. I found the park well landscaped and well layout as well. 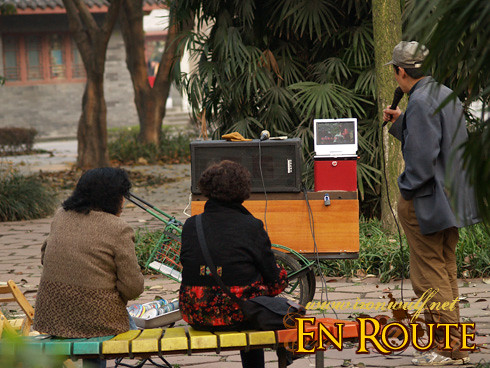 Going around, I was fond watching the laid back life the Chinese here. People aren’t really much in a hurry. Most old folks spend their time playing cards, Chinese chess and go. There were afternoon dance class, a tai chi session or just run around the park for that needed exercise. 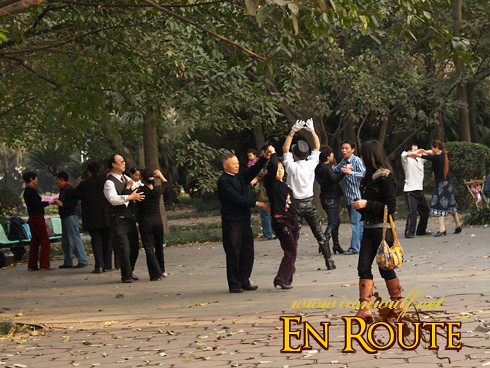 Dancing at the park

Another favorite activity is spending their time at the tea houses. There were students playing some cards and with real money at stake. Some middle aged women, probably moms scattering some majong tiles on their tables. Other groups were simply talking. Most of them were nibbling on some pumpkin and squash seeds. Aside from the occasional badgering of some touts who would like to demonstrate a “tea ritual” with a brush that would probably be good at cleaning one’s ear, it’s a very peaceful place. 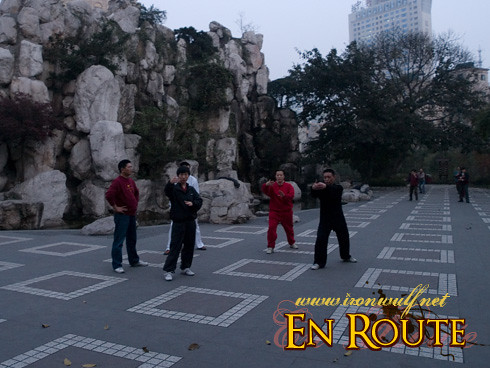 Tai Chi moves at the afternoon

We sat nearby the lake which somehow reminds me of Burnham Park in Baguio. The weather was cool and getting colder while the sun was setting down behind the city skyline. I was amused at the tea we had. They used the real thing. They served a lemon and a chrysanthemum and gave us a thermos of hot water in case we would like to refill our glasses. It was an enjoyable laid back afternoon. This is Chengdu. I could live here for a while, I told my friend.