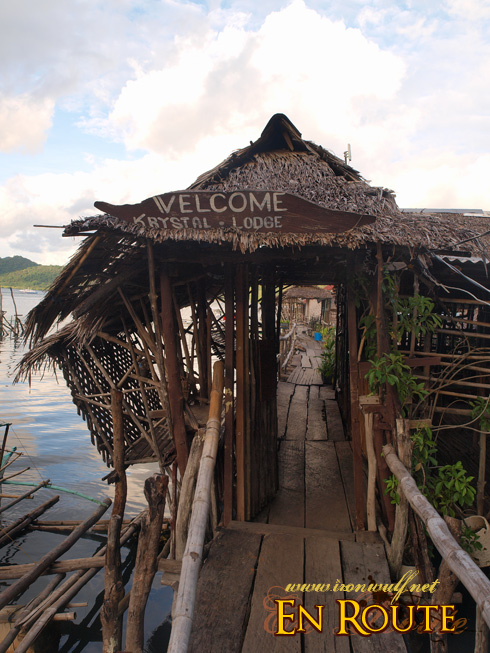 Dayon Camo (Welcome) Coron! Talk about Living by Water. I guess it’s true that what you hold most in your mind will find itself in reality sooner or later. Our accommodation in Coron, was such. There were several options on lodging in Coron but with the long weekend, it would seem a lot have booked earlier so most of the rooms at popular lodgings were quickly snatched. When learning Krystal Lodge has a couple rooms to spare just enough for the rest of us, I immediately reserved the rooms for us. So for 3 days and two nights, this is our home in this proverbial island in Palawan. 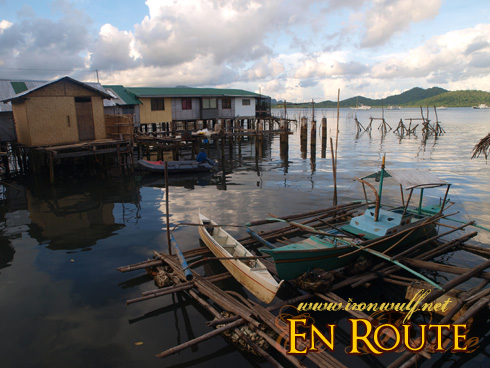 Krystal Lodge is placed quite well away from the noise of the bustling Market center yet not far enough to just walk around town. Don’t expect any fancy 2-3 star type lodging here, in fact it’s quite spartan. It has no air conditioned rooms and the flooring is all made of bamboo and wood, the only line separating you from the mangrove populated waters below. Most of the rooms and furnishings are also made from native materials. Which in a sense is more recommended since they are standing above water. 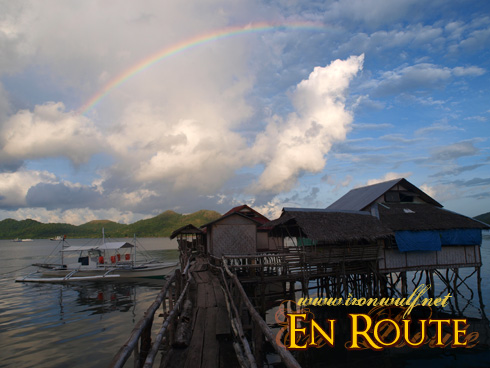 Rainbow over our lodging at Krystal Lodge

Hopping from one cottage to another entails crossing some rickety foot bridges, so if you easily suffer from vertigo, it’s best to look for other lodging or just take this in with a sense of adventure. C’mon, it’s not everyday you get to stay at stilt houses like these. 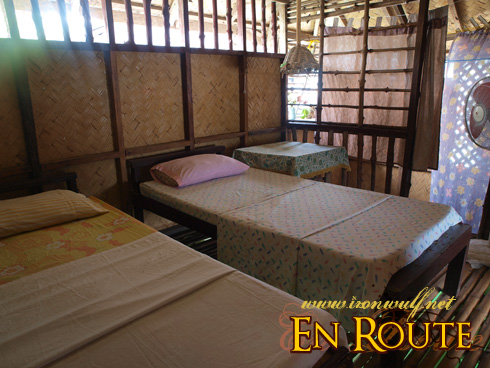 Twin beds at the first floor

I find it that even with no air condition, the air here in Coron is cool enough. Especially when our room is very well ventilated (exposed). Our 3 room cottage is the farthest and closest to the sea. We have our own gazebo and hammock and boats can quickly come and go at our doorsteps. Speaking of ventilated, if the semi transparent thin cloth cover in the bathroom (which can easily be blown by the wind) doesn’t bother you while taking a tabo shower, this is as close to living as the locals do. If you are interested in this lodging, feel free to contact Mhye of Crystal Lodge at 09284108074. Rooms are basically standard cheap from 500-1000 a night. Just a warning that water pressure on the farther cottages had a bit problem last time since there was a brownout at the area. But I’m sure they’ll fix it. 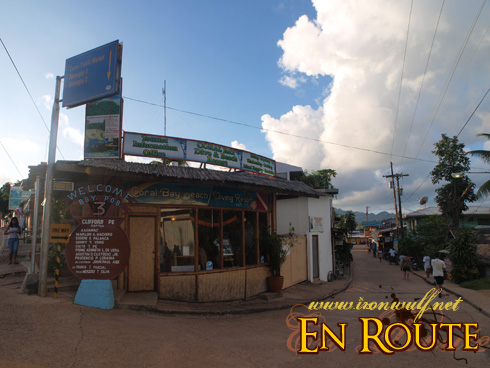 Walking at the streets of Coron

We also asked Mhye if she can find us a boat which we can contract to take us island hopping around Coron. In a while, Mr Eran Decena, who surprisingly has the same last name as me introduced himself at our lodging and suggested some IT. He’s a quite a popular guide in Coron, being contracted by one of the popular DIY organizer and also the other group from Travel Factor. Well he’s got quite a reputation and promised to find us a boat for 1800 for a whole day’s tour. 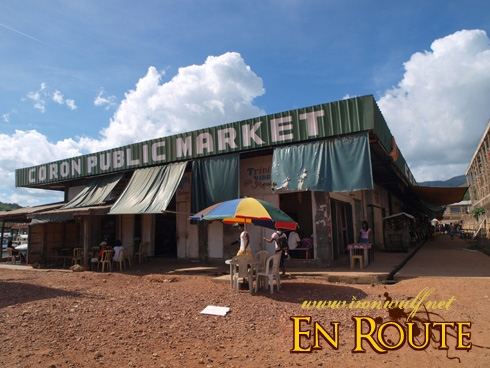 That afternoon, Mang Eran also gave us a brief tour of Coron Town. The town itself is still very rural with mostly low rise structures populating the place. What’s great here that it’s a small town that you could walk around in less than a day. Another good idea from the local government is the very visible placements of signs. It’s hard to get lost here and the locals are very helpful and approachable as well. 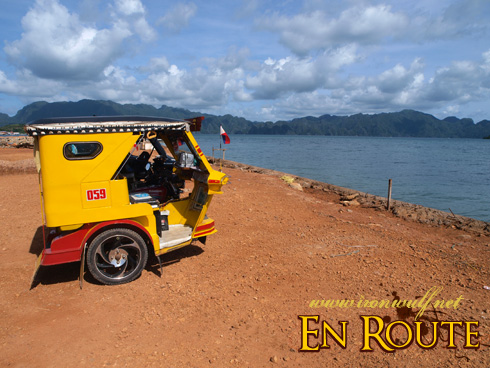 Yellow Tryke at soon to be Waterfront Park

Speaking of approachable, we were able to meet Coron Mayor Marjo Reyes who was doing some stretching while on a break from his basketball game just in front of the municipal hall. It’s great how low profile people in position here are that you can just approach them with less formality. He hinted us on some of the developments happening to the town. Feeling a bit embarassed on how a bit dirty the place was with all these constructions going on. We were a bit surprised by this was we already found the town really clean and orderly. 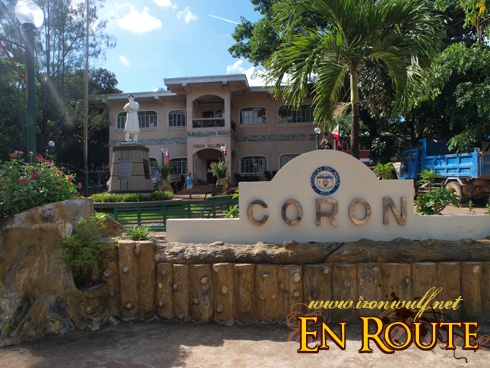 Mang Eran led us to a reclaimed land, soon to be waterfront park being developed just pass the market place. I bet this would be a very popular hangout among the locals. The views already stunning as is. We later on moved to the school ground which was used as an army barracks during the war era. An original lone war canon can still be found there on the school Makabayan Park. 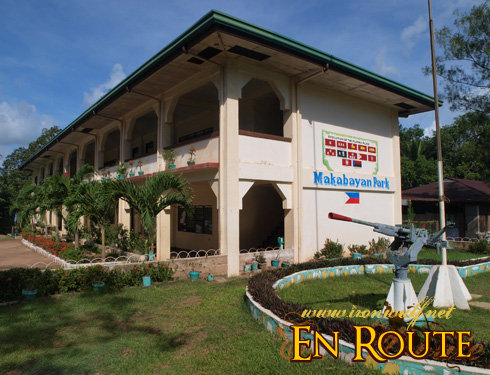 We passed by other notable structures in the area which has some history of looted gold hidden somewhere in the vicinity. There are also some old structures there which can pass as a heritage site but also torn down structures because the locals where complaining it was infested with ghosts. Interesting if you ask me. Shortly we bought some fresh sea food from the market for tonight’s dinner and some to take for tomorrow’s island tour. 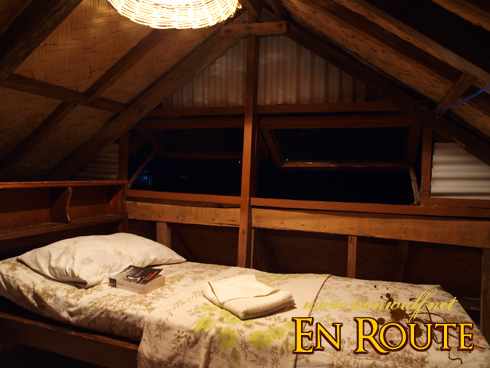 My Bedroom at Krystal Lodge

We climbed Mount Tapyas that afternoon as I have narrated before. When we got down, we headed back to the resort where we feasted on some freshly cooked shrimps for dinner. The shrimp was simply cooked with just boiled water and some salt but they were fresh catch that it’s delicious taste is still there. We ate on a table outside our cottages while sharing some interesting stories in the realm of the blogosphere. 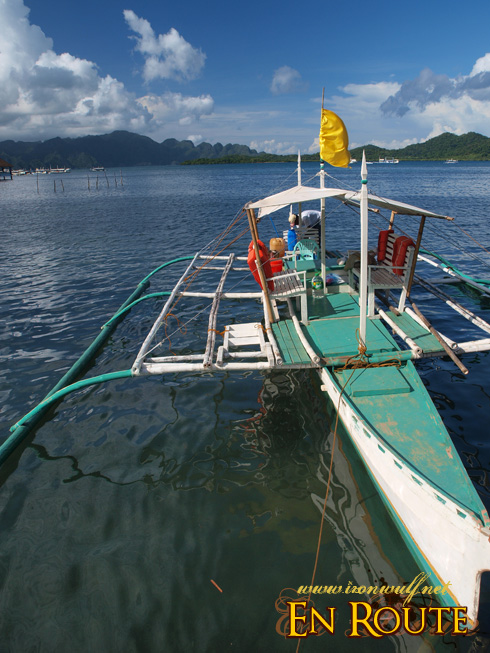 Our tour boat for island hopping around Coron

We soon retired to our beds after a long night of stories (and gossips). I climbed the ladder to reach my bed on the second floor of our cottage. With a higher vantage point, I could see the roofs of the nearby stilt houses and cottages. I turned off the lights and soon moved to my bed careful not to make much commotion as not to disturb cottage mates Nina and Eric below. As I lay in bed, I could clearly see the lit cross at the top of Mt Tapyas from the window. I could hear the occasional rustle of thatched walls from the breeze of the wind. Tomorrow is an exciting day I thought. I can’t still believe I’m in Coron, sleeping in a stilt house with only the cool breeze of the sea inviting themselves in as I go to sleep.