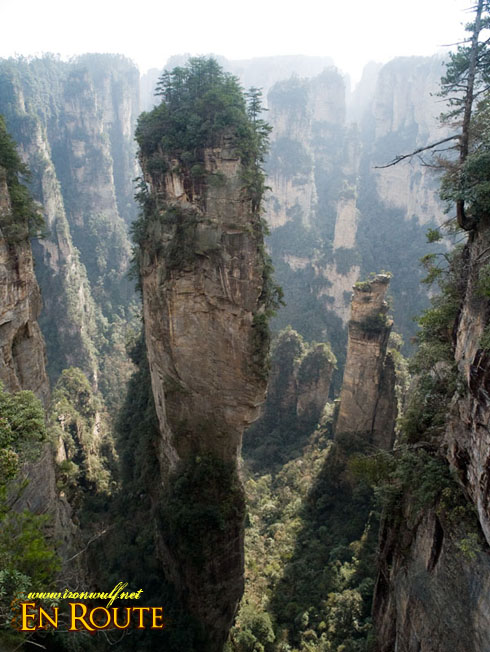 It was evening when we arrived at the city proper of Zhangjiajie from the town of Fenghuang. That’s about 2 hours bus ride costing us 60 RMB. The bus was much better and comfortable than the ones we had from Tongren to Fenghuang, allowing us to catch on a bit of sleep. When we got down at the city station, we hired a taxi to take us to Zhangjiajie Hong Tian International Youth Hostel. At first it was a fairly smooth drive then when we got into a bottleneck at one of the streets. We some cars pulling back to turn around, we thought our taxi was gonna do the same until he went up on the pedestrian lane and started driving past the vehicles caught in the bottle neck while people were avoiding our car on the lane. It was crazy! We finally found our hostel where we would sleep at night. Zhangjiajie, this is gonna be an interesting place, I thought. 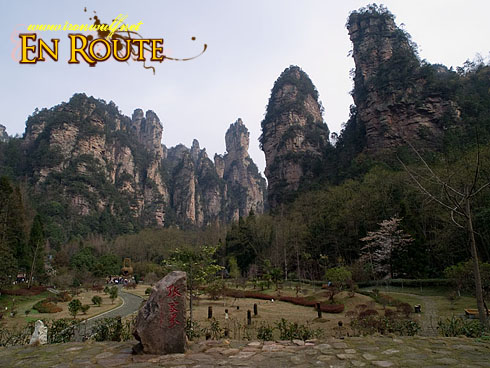 The day after we were headed to our main destination, the Wulingyuan Scenic Area. It is another one of China’s UNESCO World Heritage Sites found north of Hunan, China, covering around 243 square miles consisting of lush sub-tropical forest, stunning karst pillars and scenic streams and rivers. The area is so vast that it’s divided into three nature reserves: the Zhangjiajie National Park, the Suoxiyu Nature Reserve and Tianzi Mountain Natural Reserve. For the day due to it’s vastness we chose to go with the first one first, the Zhangjiajie National Park. 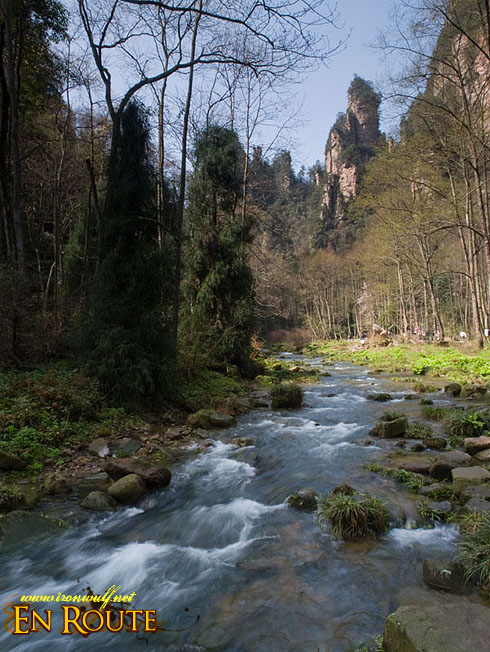 From the city we went to the local bus terminal and rode a bus heading directly to the National park which only cost 10 RMB. The ride was about 45 minutes to an hour until we reached one of the park gates. The park entrance is 248 RMB which can be a bit steep but it’s worth it if you come back the next day as well since it is valid for two days. 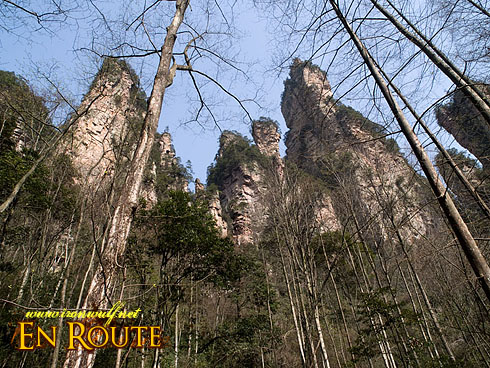 A mother and Child Rock formation

The park opens at 8am and closes around 5pm. If you are commuting you must be on your way back to catch the last bus going back to the city. There is also an option to stay overnight at some of the ethnic minority villages inside the park if you have the luxury of time. There are a number of touts at the gate entrance there offering their place to sleep. Again people here can be quite aggressive. There was this middle aged woman who kept following us even inside the park for more than half an hour persuading us to try their home stay in the village. She must have mistaken us probably that we would stay there for the night because of the bags we’re carrying that she even offered to carry. I know these people are just making a living that it was a bit pitiful to let them down. After a while we saw her hassling another group of tourist. 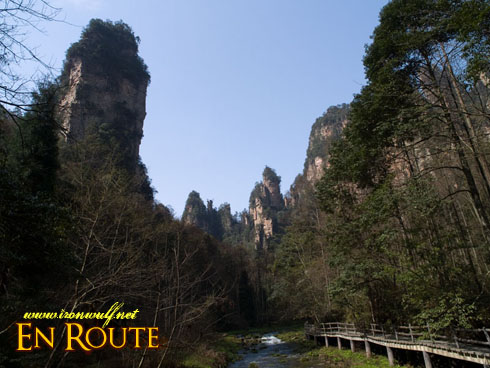 Wulingyuan Jinbi Strem and Side bridges

Even just after the main gates, the scene of the park was already stunning. I have only seen scenery like this in Chinese Movies and never thought it would be better seeing them with my own eyes. Those sand stone pillars about 20-30 stories high jutting from the ground up towards the sky dominates the horizon view of the park. Temperature here is not as cold as in the South West were came from so a thin layer of jacket (even none) would suffice here. 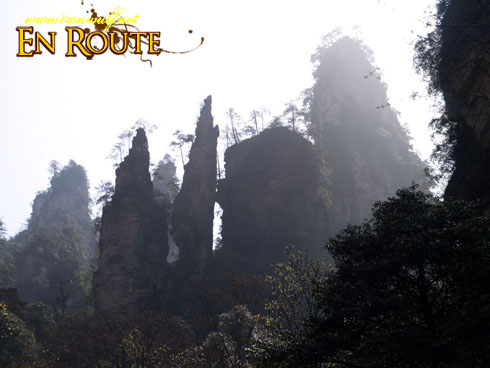 There are several paths to take around the park. We decided to take the right path going along the Jinbi Stream or commonly known as the Golden Whip Stream. This stream has the length of 7.5 kilometers that disect throughout the park. Trekking along side this stream is one of the best nature walks I had experienced. The Golden Whip stream is cool and crystal clear, the plants and vegetation beside it are so abundant. Couple with the scenic sandstone pillars along the way, it felt like walking in the city streets but replaced by the natural wonder of nature. 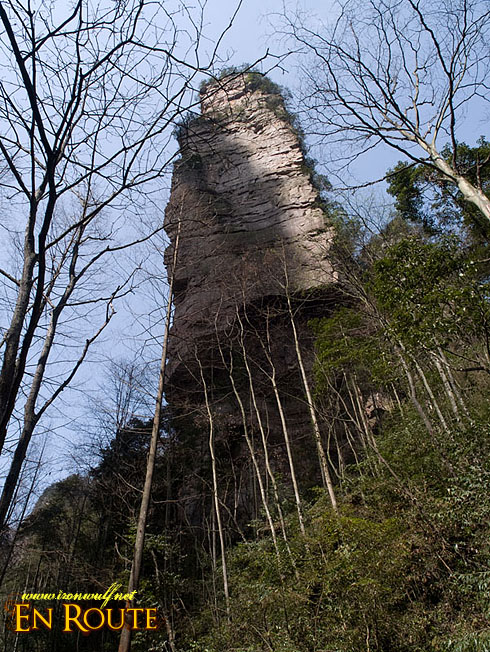 Just along the pathways there are marked scenic points where the Chinese gave names on several rock formations along the way. Rock formations like Mother and Child, Meeting between Man and Woman, Two turtles to name a few. At first it was kind of hard to see them but with these name suggestions one can make out the figures from the rock faces. 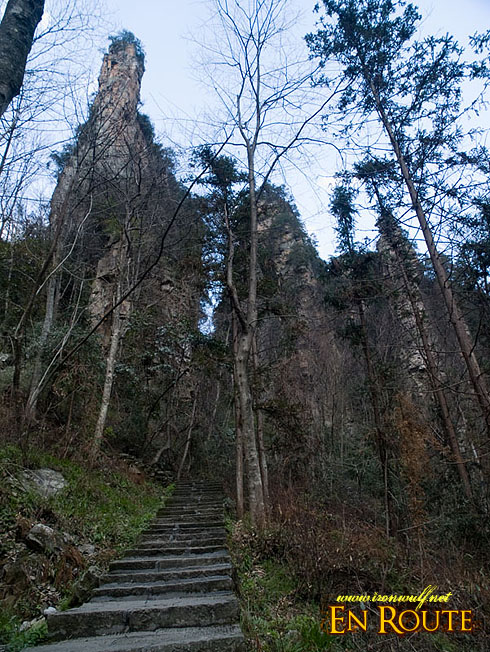 We came across a fork on the road where we had a choice of whether we continue the path beside the river or take a flight of stairs. The area map there showed a short distance on the trail up to the highest point of the park which is the Huang Shi Zhai where the Xianren Qiao or Bridge of the Immortals can be found. So we decided to take the stairs believing it’s a short distance up, which we found out later to be wrong. 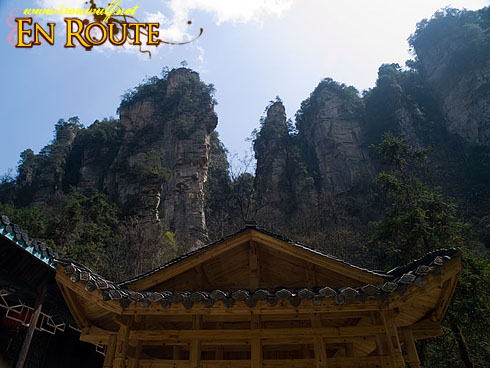 The trail turns out to have thousands of steps. There were already some tourist hiring porters to take them up to the summit. It was a tiring hike but good thing the weather was cool enough to ease a bit of our exhaustion from climbing the stair trails. We found a mini store there midway where we took an overpriced lunch of noodles and drinks and continued on. We also passed by some lodging areas where visitors can also stay for the night. About 890+ meters above as my GPS indicated where the stair trail ends where we finally had a flat trail. Then shortly I heard what sounds like a motor approaching then I saw a bus pass by. How the heck did that bus got here! Funny thought that there are transpos for this summit and if we pushed further down the river there’s also a paid elevator at the end trail going up to the summit. Thinking about it we could have explored more with the an hour and a half going through the stairs had we known about it. Anyways, we savored our hike and finally reached the amazing view of China’s Ancient Skylines. 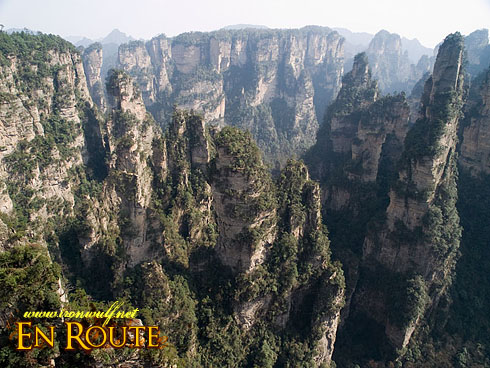 If in the US coast they have the Grand Canyon, Asia has the Wulingyuan Scenic Area Boasting 3,100 Sand Stone Pillars scattered in the area and more than 1000 of those rising up more than 200meters. It’s really hard to describe how it looks like unless you see it for yourself. I think my pictures also pales in comparison to what it really looks like in reality. The only downside I see here is the number of tourists flocking the area. We were wondering where most of the tourist went when we were climbing the stairs not knowing they were already there on an easier more convenient route.

We also found the natural bridge, Xianren Qiao. But it somehow didn’t reach my expectation. It was just a short length of natural rock bridge connecting two pillars. At that time there were lots of Chinese tourist taking pictures there that I just left the area. 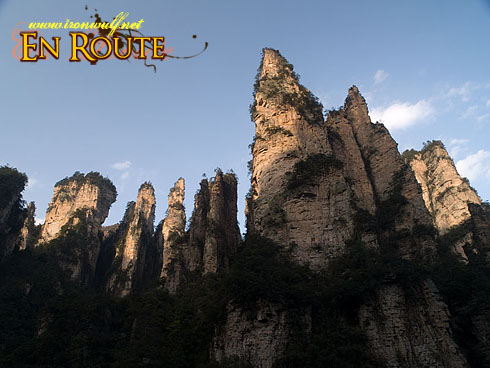 We spend the rest of the afternoon admiring the vast geological wonder of Wulingyuan Forest of Peaks. We left soon before the park closes and to catch the last bus going back to the city. This time we took the expensive elevator down the summit which costs us 56 RMB per person. Rode the service bus back to the entrance gate and finally, thankfully found the bus going back to the city of Zhangjiajie by nightfall.