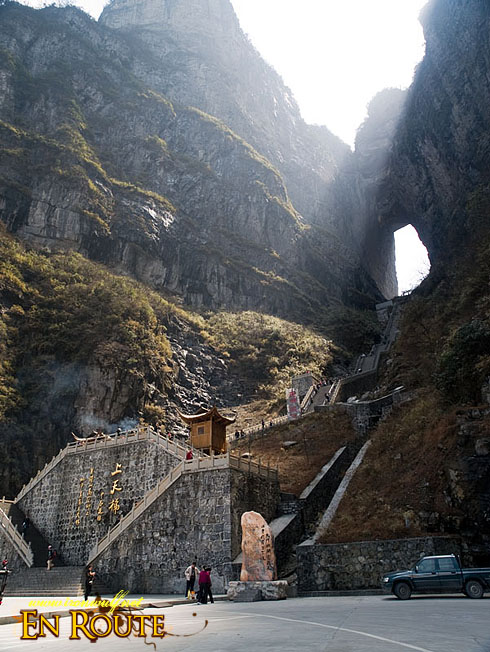 On my last day in Zhangjiajie, we decided to visit the second National Forest Park in Zhangjiajie City, Hunan – The Tianmenshan or Tianmen Mountain National Forest Park. This National Park is a newly developed attraction in the north western Hunan Province of China, located only 8 km from the city proper of Zhangjiajie. Standing at 1518.6 meters, Tianmen Mountain is the first recorded mountain in the history of the province and has been revered as the “Soul of Zhangjiajie”. The mountain, boasting intact primitive forest, numerous rare tree species and medicinal herbs, and abundance of fauna. 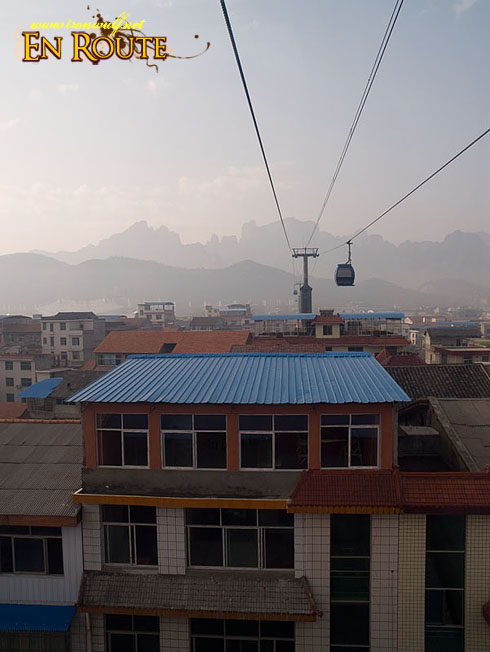 The good thing about visiting this mountain is that we don’t have to climb or hike far. From the city itself, you can ride the cable car going to the mountain summit. The cable car station is also the park entrance where you have to pay a fee of 258 RMB (38 USD) that is good for 1 day. I find the fee a bit expensive, comparing it to Wulingyuan Forest Park which is good for two days. I guess since this is a new park, they have to cover for the operations and structures as well. We came in mid-morning already and there was a long queue of local Chinese tourist already. 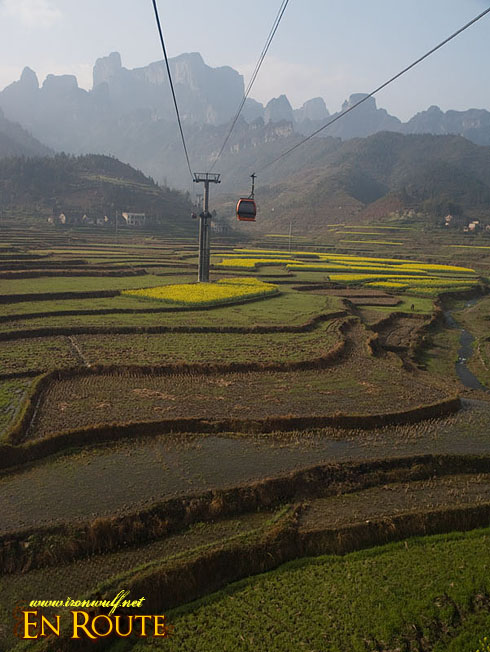 Over the Zhangjiajie Terraces

The cableway from the city towards Tianmen mountain is considered as the longest cableway in the world with a distance of 7455 meters and a height gap of 1279 meters. It has 98 cars and 57 brackets (with 3 used for rescuing) imported from a French Corporation. I was really excited when we boarded the cable car totaling of about 8 persons per car. Positioning myself at the front seat with stupendous views of Zhangjiajie landscapes: From the cityscape, countryside, terraces up to the numerous jagged mountains penetrating the Hunan sky. The ride from the city up the mountains took around 15-20 minutes with awesome views which I really enjoyed. 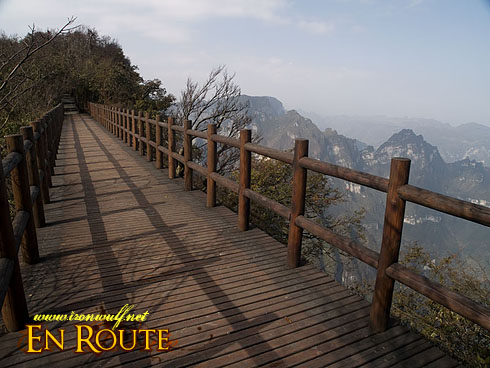 There are two station stops in Tianmenshan the middle and the top station. We went to the upper station first to explore the summit. With a map in hand we decided to go a counter clockwise direction and head right of the summit trail. We moved in fast while the other local Chinese tourist were taking time watching a cultural show. At least we don’t have to compete with them when taking pictures being far ahead of the trail. 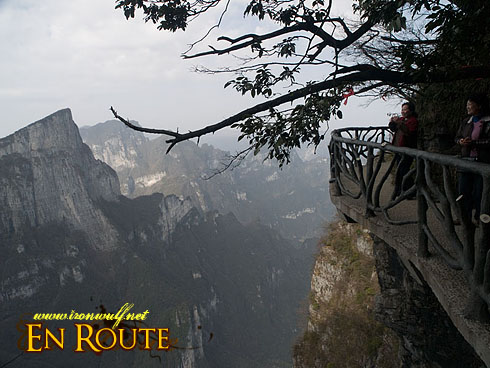 We passed by a wooden bridge first they called Rainbow Relying Pass. I don’t see any rainbows there but the mountain view and the Zhangjiajie City looks breath taking there. Those Chinese markers try to sensationalize the names of each of their sights sometimes. Continuing faster through the path there was a choice between the inner road and the cliff side road they call the Guigi Cliffs plank trails. It’s a trail actually on the side of the cliffs which can be really frightening but exciting. 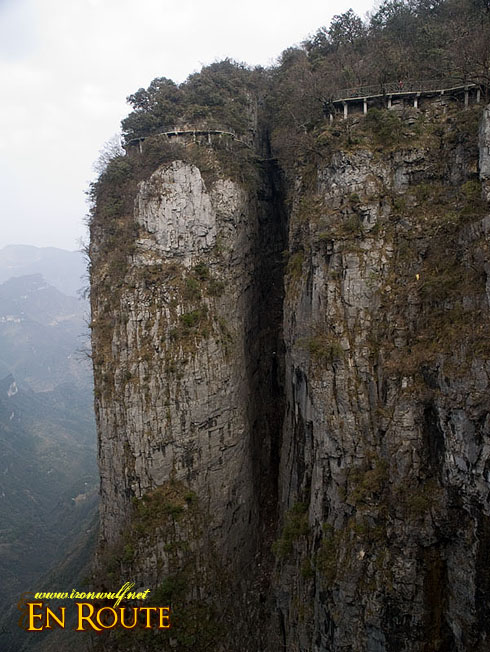 The cliff side trail is quite long that it took us around 20 minutes to traverse on a fast pace trying to avoid the flag-toting tour groups also approaching. The Guigi Cliffs View is just amazing but not to those afraid of heights and prone to vertigo. There’s a deep cliff fall from where you are and there are no protruding rock faces to break your fall. You’ll just splatter more than 1000 meters to the ground. 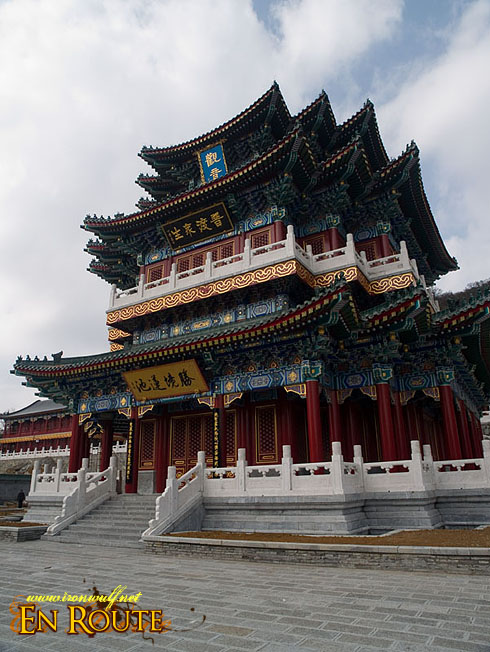 After the cliff trail, the path goes inward at the western face of the summit. It was mid day and the sun was up and more intense on that part of the summit where the low forest trees wasn’t enough to cover. Soon we stumbled upon the Tianmen Temple. The 10,000 square meter temple area is newly built and they were finishing up constructions when we were there. Even before this new temple was built, there was a smaller temple in which Buddhist Pilgrims climb to since the Ming Dynasty (1368 – 1644). 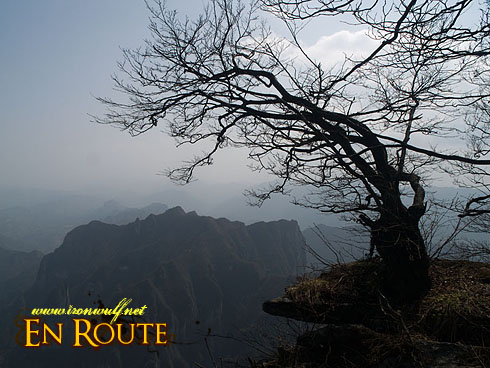 We wanted to ride the cable seat cars going up to the actual summit temple but it wasn’t operational yet and they use it to carry some construction materials first. We decided to just continue with the trail and reached the southern face of the mountain. More mountainscapes and rock formations along the trail. The trail here is quite long that it was almost an hour traversing it. 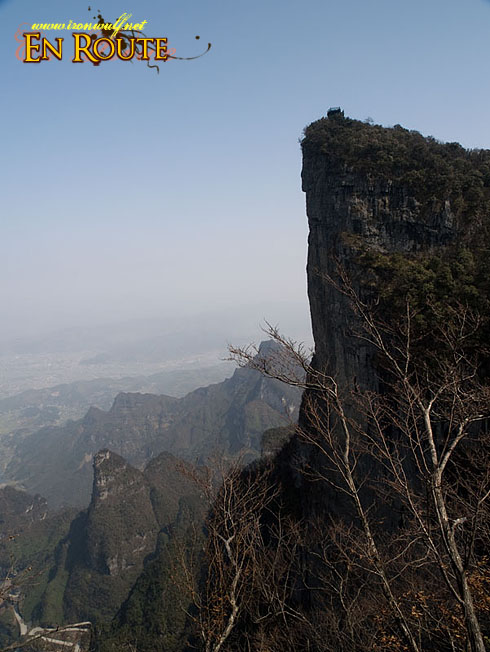 The Yu Hu peak, one of the attractions there would be more dramatic in the morning I thought. We stopped there for a while to eat some snacks as it was almost noon by that time. We were at the South East face of the mountain and could already see the Cable Car Station. 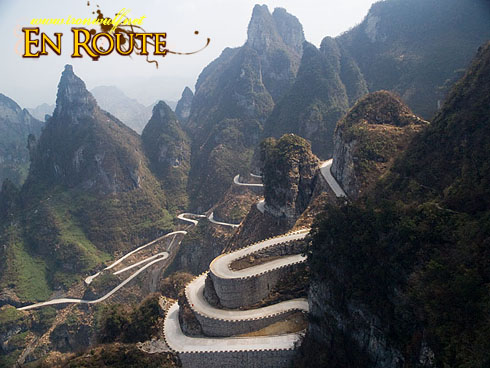 By noon we went down to the second/lower station to view the the Tianmen Cave. They call this big hole in the mountain a cave and has been made into an attraction. When they were promoting the park they had three jet planes fly through this hole and they also had a rock climber climb the cave walls. To reach the platform towards the cave you have to ride the shuttle bus service and go through the spiral road of Tongtian Avenue. From above the cable car, the view of long winding road which looks like a dragon ascending from the mountains is just wondrous. It just makes you more impressed on how the Chinese were able to build structures like this and how long they made it. 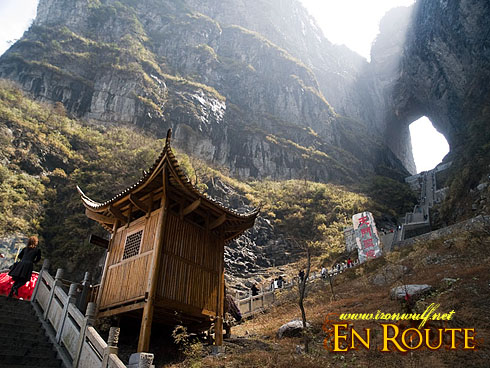 Tianmenshan up the Heaven Reaching Ladder

About 25 minutes up the Tongtian Avenue you’ll reach the base platform and a long flight of stairs going up towards the cave which they call Heaven Reaching Ladder. At that time, the lighting was so dramatic with the rays of sun just beaming down the platform. What impressed me about the Chinese is that they managed to make an attraction of this hole/cave by adding all these man made structures. 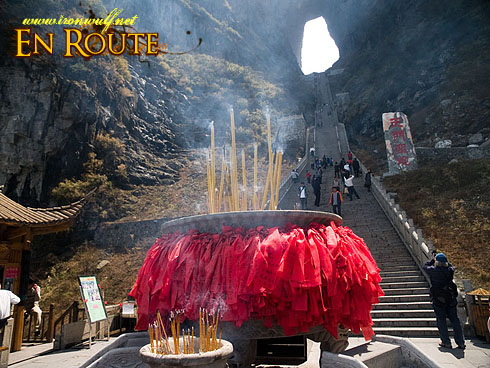 Climbing the flight of stairs was tiring that we had to stop once in a while. A bit ashamed when more petite and elderly Chinese men or woman would easily pass us by. For them this is a holy and scared place. Once they reach the top they offer a prayer to Buddha and light some prayer incense. Honestly I was expecting to have a grander view on the other side of the cave or much heavenly scene. It’s the same as when you are on the top. I guess the attraction of it can be appreciated from far distance and the intention of just climbing and getting there is part of the thrill. 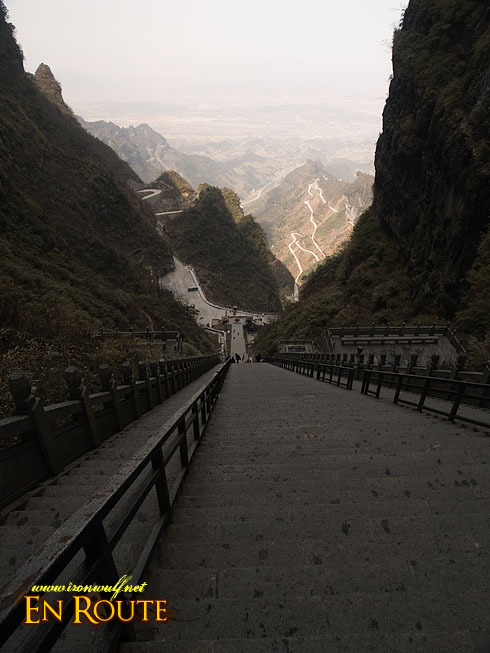 We stayed there for a while, enjoying the cool atmosphere under the shade of the cave. I was glad am there but at the same time I felt sad. I realized my trip here in China is drawing to a close. I have seen many sights, traveled many miles and really enjoyed the journey. In a while we’ll be descending back to the city. And that night I’ll be leaving Zhangjiajie and head to Guangzhou on an overnight train by myself. After my last train ride, I was wondering at the back of my head how would it go with me on my own.