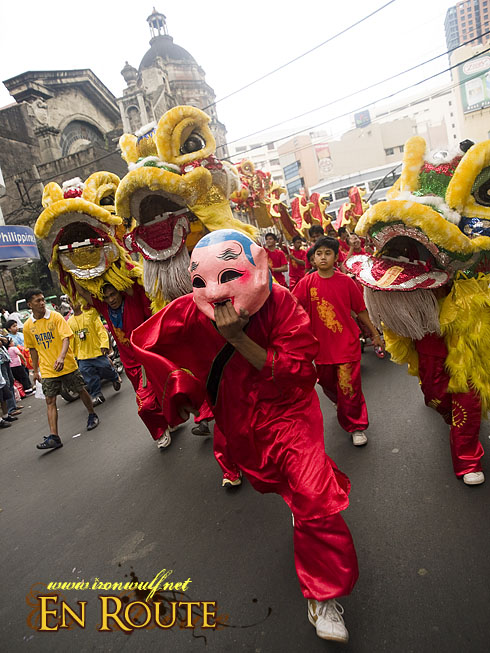 Kung Hei Fat Choi! Gong Xi Fa Cai! Kiong Hee Huat Tsai! Happy New year! Whichever or however you may say it, the Philippines is one of the few countries in the world which significantly celebrates the Chinese New Year since Filipinos have very rich Chinese Roots as well. In Manila, the premiere place that celebrates the new year is in Binondo. 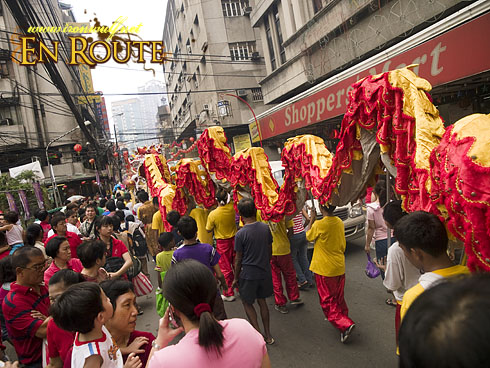 2009 is the year of the Ox in Chinese Astrology. A lot of Chinese still observes their traditions of buying charms, practicing rituals which would bring good luck for the year. Filipinos, even if they are not pure Chinese somehow also observes this. In fact, modern Chinese fuse their traditional practices with Christian beliefs like going to Church on the new year. 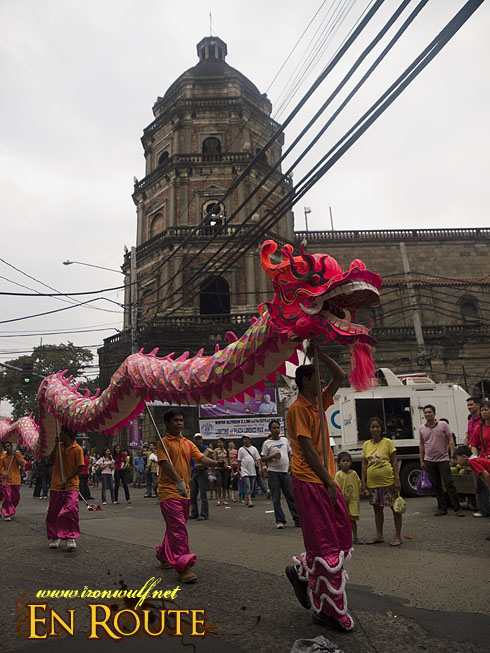 One popular practice that is both colorful and entertaining that is still strongly observed is the New Year Dragon Dance. Once began as an entertaining dance to call in the rain during the early times in China, it has been an old tradition performed nowadays to bring luck, success, and long life. 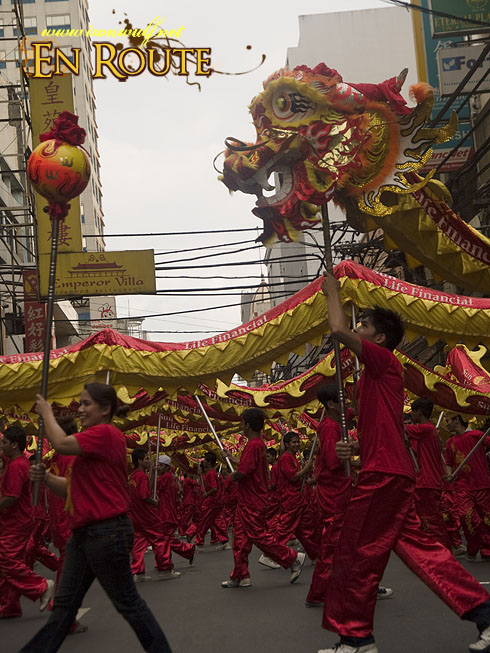 I arrived after lunch in Binondo to hunt for this Dancing Dragon Performance and it surely didn’t disappoint. Amidst the heavily crowded streets of people buying Chinese items and goodies, drumbeats would usually signal a dragon is coming. Soon, above head of the crowds, a squirming, colorful form would emerge. Here come’s a Dragon ready to dance. 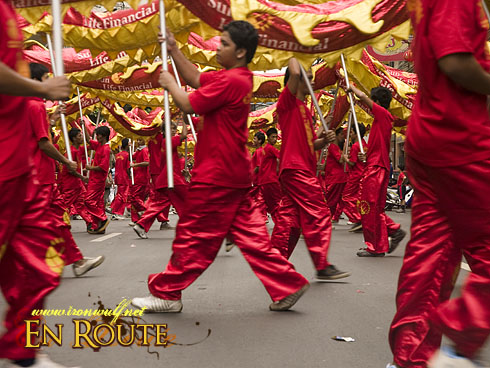 Of course it’s not a real dragon, but a well rehearsed and choreographed movements of a group of individuals dancing. A dragon dance is not only a series of random movements, even the patterns, whether whirling, circular or a tracking motion, has a significance. Usually a dragon is lead by a pearl bearer. The pearl symbolizes wisdom in which the dragon follows. 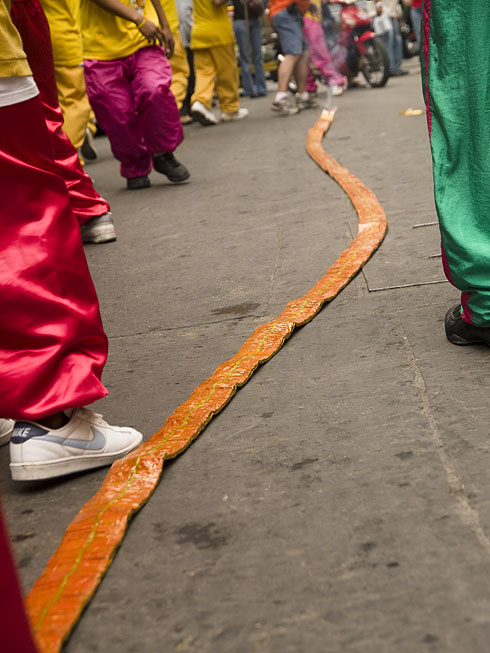 The dragon varies in length, the longer, the better since it symbolizes more life, luck and fortune. In this year’s celebration, I have seen the longest dragon dancing in the streets ever. It was an amusing sight with numerous feet running under. The dragon head is held by the one with the most stamina in the group since the dragon head is heavy to carry around. 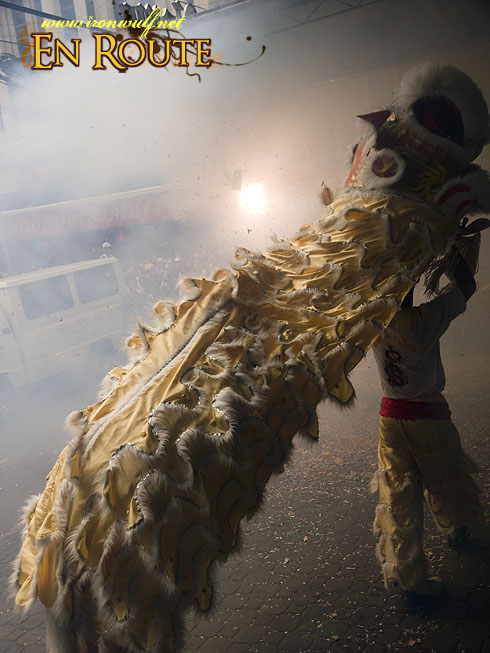 On one part of the dance, a smaller dragon would reach for an Ang Pow (A small red packet with money) on the ceiling. The Ang Pow is believed to ward off evil spirits. The money inside are usually in even numbers to bring good luck as odd-numbered values are only given in funerals. 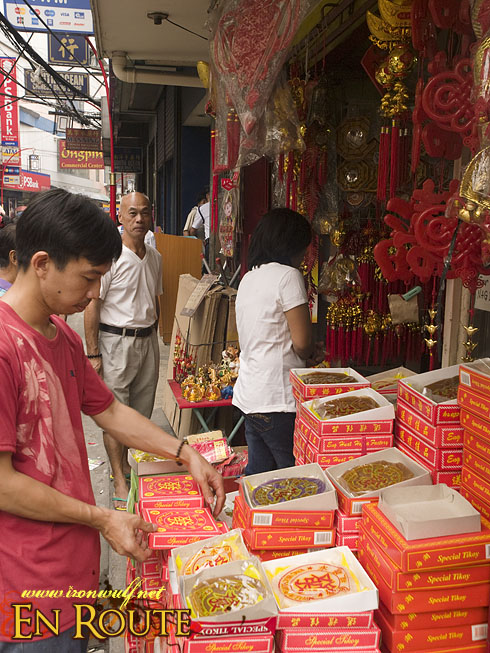 A long firecracker belt is lit off to culminate the dance. It’s one loud and smoky sequence but during those times, the dragons would whirl around this firecrackers in celebration and to drive away any negative spirits or bad luck that may come. It’s one wild drago dance at this time and the smoke really choked me several times seeing it. 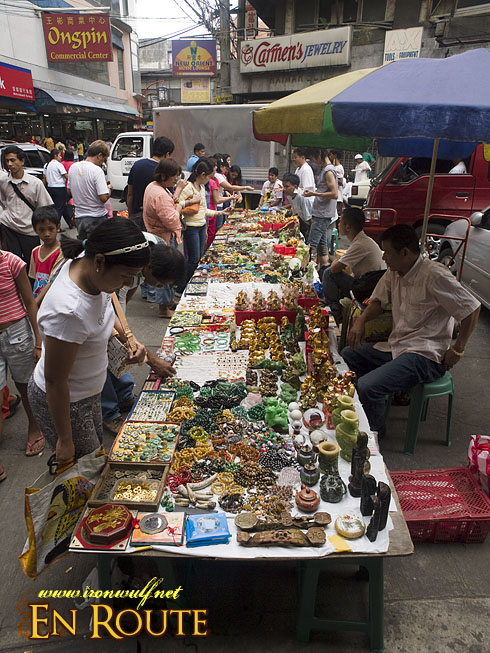 Watching the dragon dance is always an entertaining treat. The colors just flow wonderfully with the coordinated steps of the dancers is amazing to see. But Binondo seemed to have spruced up this year’s celebration. I heard people saying that this year’s celebration is a lot better than last year. There were some float parades for some companies and some programs as well which I didn’t stay long to watch. 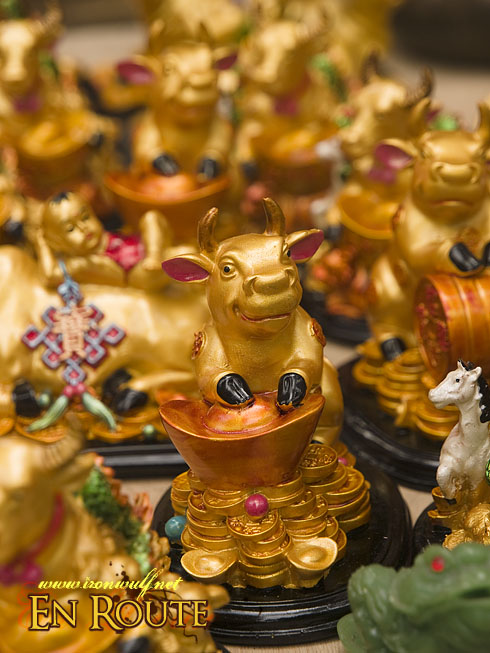 I also bumped into famous street walker Ivan Mandy there on his way home from 5 Street walk tours that day. Despite the fatigue, I have to thank him for the big favor when I was buying some Hopia at Eng Bee Tin. Thank you very much! So to you dear readers, Thank you very much and may this 2009, the year of the Ox be prosperous and blessed.