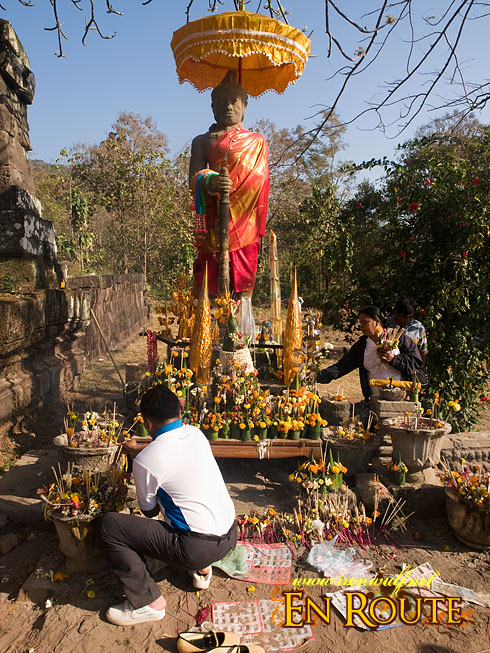 An impressive Dvarapala (Sentinel Figure) at the stairs entrance way

After crossing the Mekong River, it was around 10-15 minutes drive along an old rural town of Champasak until we reached the main gates. The road was rough and dusty and as we near the park entrance, stalls and eateries line up on both sides. We decided to finally have breakfast there. Ping had a stir fried rice and I had a grilled chicken with sticky rice for breakfast, both amounting to 46000 kip. With satisfied tummies we drove towards the main gate of Wat Phu Champasak Site. 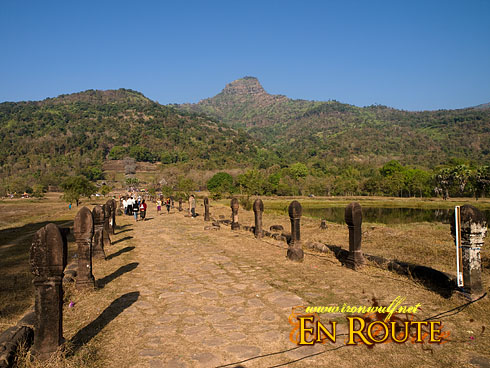 The promenade walkway with sacred Mt Penis on the horizon

At first I though we can just walk through at the main gate but we still brought our motorbike inside. I paid 30,000 kip for the entrance and another 10,000 kip for my camera. From the main gates we drove a few meters more. I noticed there was a huge crowd of people at the open grounds before the main site. My first reaction was “What the hell?”. It looks like it was an aftermath of a party. There were some stage platforms and lots of trash scattered about. Then I remembered reading about the 3 day Bun Wat Phu Champasak (Wat Phu Champasak Festival) held during the full moon of the third lunar month which is February. 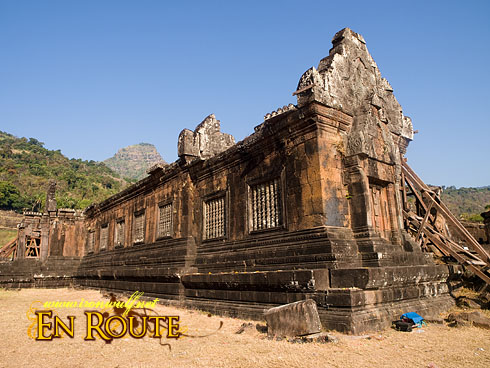 One of the Quadrangle Pavillion

So that explains it, but I thought it would start on the full moon, not the days before. During the festival, Lao visitors would climb the hills, stop on key sites to pray and leave flowers and incenses. Over the years, the festival became more commercial with night programs, boxing matches, concerts, comedy show, free flowing beer and rowdy crowds. 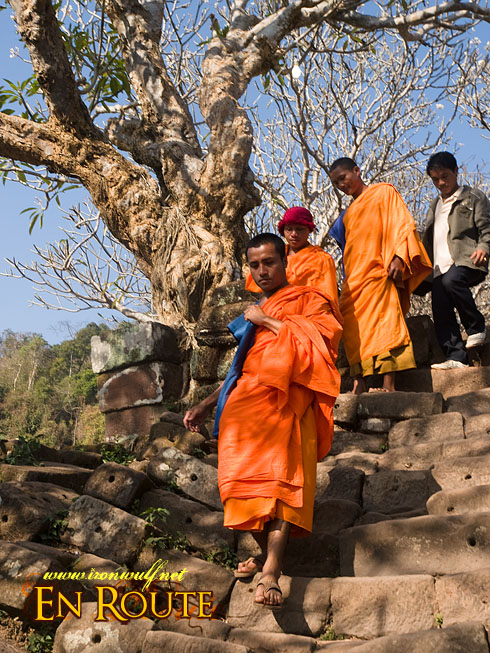 I was actually put off by this crowd and dirty environs but since I’m already there, I decided to explore. The Wat Phu site sits at the foot of a sacred mountain Phu Phasak also known more as Mt Penis. The ruins stretches up to 1400 meters up the slopes of the mountain range. At first look, the architecture here is distinguishably Khmer, similar to those of Angkor Wat in Cambodia, which I’m not surprised since it real close down south. But it’s site layout and other mystical elements make this ruins unique, earning the eye of UNESCO and listing them as a World Heritage Site in 2001. Making it the 2nd UNESCO World Heritage Site in Laos. It was believed from inscriptions that the site has been worshiped since mid 5th century. 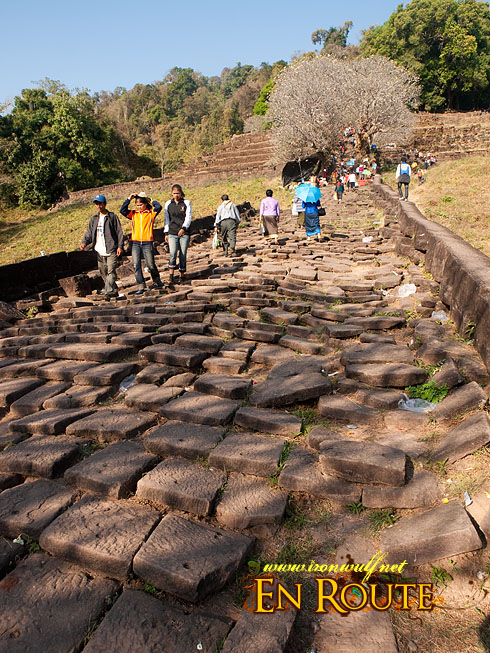 At the base level, I first walked a long promenade with stone markers lining up the sides of the promenade with a baray (ceremonial pond) on each side. The causeway is similar to the ones in Angkor as they are made of Sandstones. Just beyond the walkway are the Quadrangle Pavilions. There are actually two, but one cannot enter both for safety reasons and they are undergoing renovations. It was believed that these two pavilions are used for gender segregation during Hindu worship. UNESCO studies haven’t verified this claim yet. At this time, the site has been converted into a Buddhist worship site. 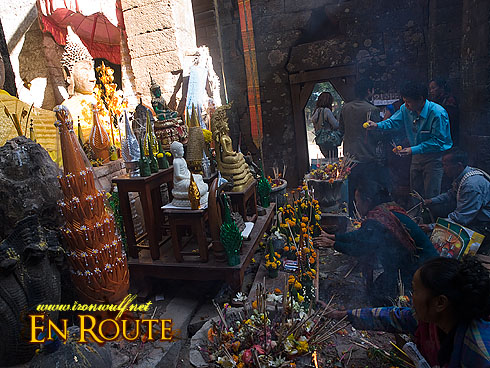 The altar inside the Shiva-Lingam Sanctuary

Just a little past the pavilions on my left is the site of the Nandi Hall. A worn down ruins but this is a royal hallway which leads to a road heading to Cambodia’s Angkor Wat also known as the Ancient Route to Angkor. just a short walk will lead to a flight of stairs guarded by an impressive Dvarapala (sentinel figure) holding a sword. It is now adorned with a golden and crimson robe. Flower offerings and incenses pile up on its foot. 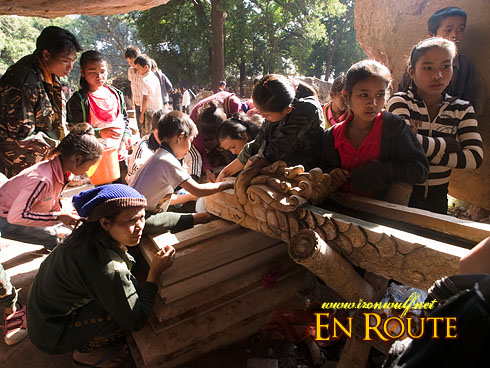 The stairways are similar to Angkor, narrow and uneven. Vendors crowd up the sideways and a large traffic of people, young to old, comes and go while I make my way up. Once climbing the steep stairs with plumeria trees, which is the Lao national tree, stationed at the top, there is a slightly elevated stairs where the stone steps has become loose and uneven due to erosion and underground root growths. Once passed this I found myself on the upper level. 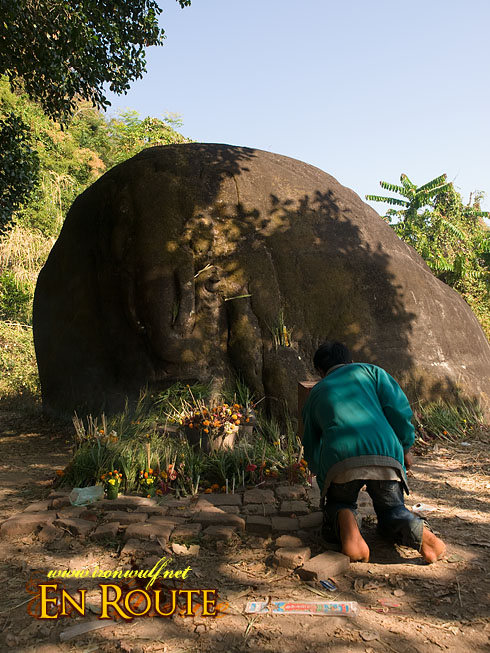 The crowd didn’t spare the upper levels. Vendors selling refreshments and some snacks were there and trash was everywhere. I was a bit disappointed but I just thought that this is a festival and it’s not always like this. I also realized that Ping was just behind me, also taking pictures with his camera phone. He probably doesn’t want to loose sight of me since I haven’t paid yet. At the center of the upper level is the main shrine, the Shiva Lingan Sanctuary. I could see locals praying here, offering flowers and incenses. There was also this pair of rocks as large as bowling balls which they lift one after another several times during prayer. 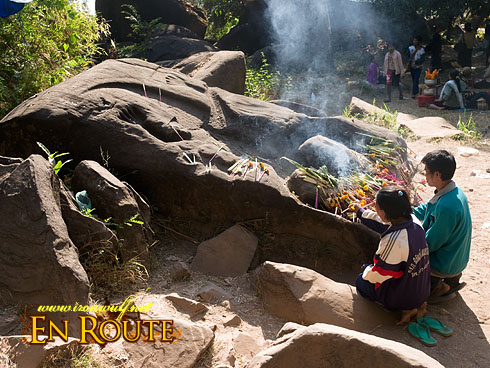 At the back of the shrine is the Trimutri of the Hindu Holy trinity of Shiva, Vishnu and Brahma carved on a large boulder. Further up, I noticed there was a crowd gathering on a small cave. I inspected closer and found people gathering to collect spring water. This Spring Water, that is flowing through the Sanctuary below is said to be Holy and has healing properties. Locals were filling in their mineral water bottles and drinking it there. 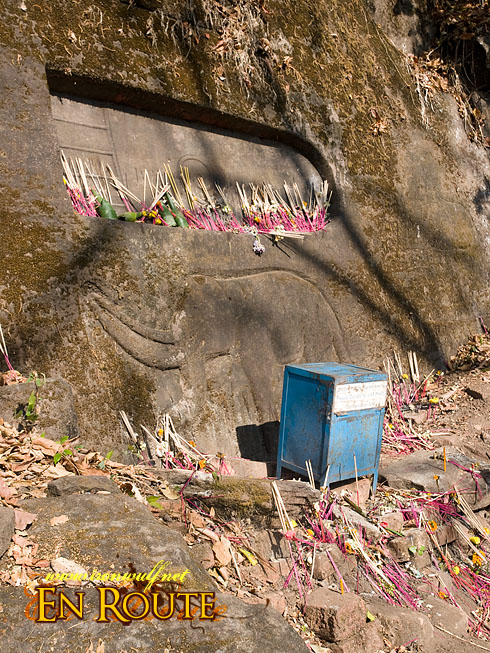 I was ready to go back after seeing all this but then I saw this young and petite Caucasian lady sitting on a rock holding a brochure. I was sure I saw her during breakfast. Wanting to speak to someone in straight English, I approached her and struck up a conversation by asking her if she could speak in English. She said yes and was also delighted that she found someone who could speak straight English to her after a while. From her accent she is definitely English. A very kind, young and humorous English lady by the name of Laura. She is about to work in Cambodia in a few weeks as an English teacher but decided to make a tour around South East Asia first before she starts teaching in Cambodia which is her next and last stop. 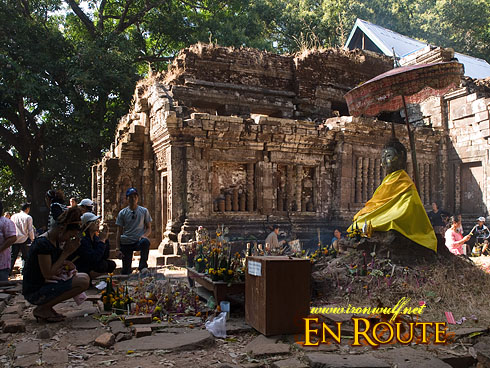 I found out, from the brochure map she has that there some other interesting sites nearby that we could check out. So while wandering around we were exchanging stories from her travels and mine. We found this Elephant Stone just north of the Sanctuary. Then we climbed some rocks and found a very interesting Crocodile Stone dating back to the Angkor period. It’s a large boulder with a deep stylized carving of a crocodile shape. One site which was tricky to find was the Buddha Footprint which we found after climbing some boulders. After seeing the sites, we made our way down and headed back. The crowd didn’t dissipate even if it was nearing noon already. 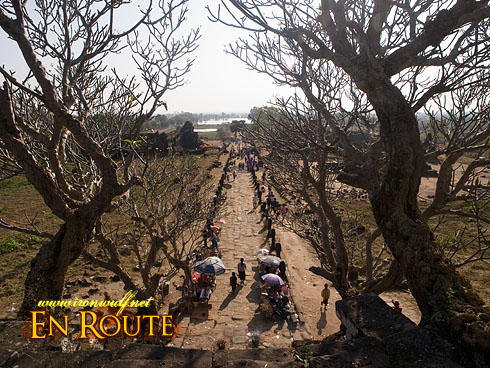 In a short while I said good bye to Laura and told her that she should visit the Philippines if she had the time. It was real fun to meet fellow travelers like her, and I’m really admired by her courage to travel by herself as well. But as with any people you meet on the road like this it’s rare they keep in touch but a pleasant memory still. The ruins of Wat Phu on the other hand is a very interesting site. I have been to Angkor Wat and I can say Wat Phu is just a small portion of the grandness of the one in Cambodia. But that doesn’t make it less significant but somehow is a great addition to it. The Festival, while I was dismayed at first sure did add color to the site. You could see the devotion of the people and the festive atmosphere which is a real contrast on any other time of the year.