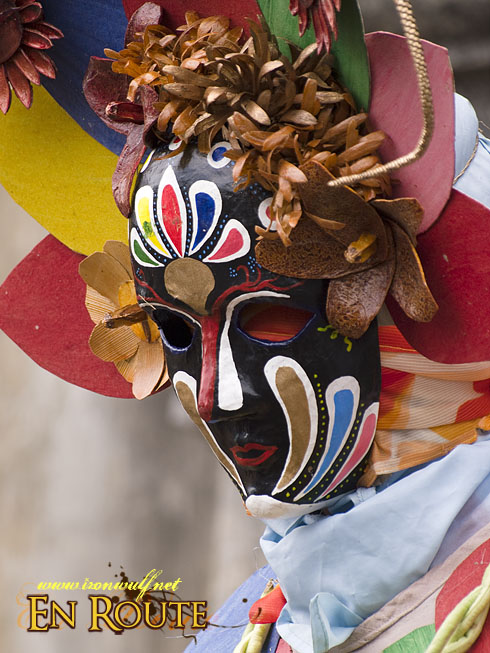 It’s not all about the langgonisa! While I love the Lucban langgonisa as much as its northern variant in Vigan, it was not the only reason I went to Quezon this time of the year. Come mid May, an array of colors spread through out the streets and houses of Lucban. What is usually a sleepy town with cooler weather than its neighboring provinces in Quezon, Lucban is very much alive at this time as droves of people join to celebrate the Pahiyas Festival, a tradition spanning more than five centuries. 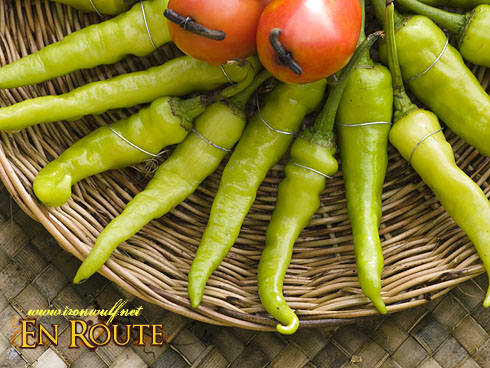 Unlike other festivals in the Philippines the tradition of celebrating a good harvest didn’t start from the patron saints but with the anitos during the 1500s. It was only in the 16th century when the Spaniards established its church and influenced the natives into converting to their religion. Bearing their bounties, farmers would regularly bring select produce to the church and have them blessed for another year of bountiful harvest. Seeing that their devotion to the Church patron Saint San Insidro brought another year of bountiful harvest, their faith and devotion intensified. 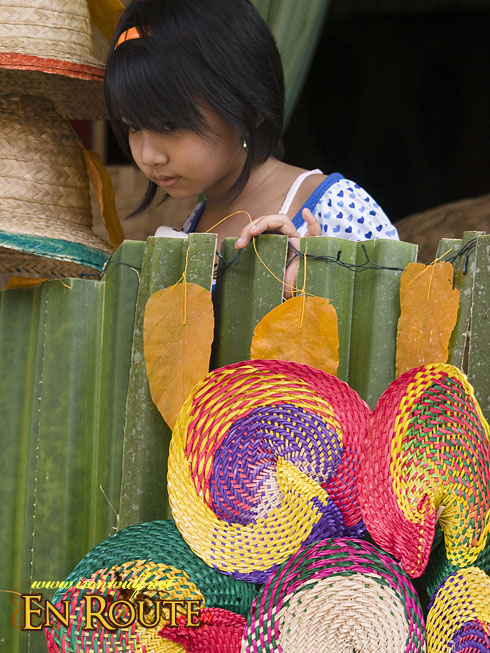 Peering over the wall

The Artsy colorful celebration however didn’t start until 1963,when the Art of Lucban Club organized a trade fair and cultural shows in town. With aims to draw tourists to the province, they held this yearly and every year, it was grander and more colorful to draw more and more people. For the town folks, aside from bringing their harvest out of the door, they thought it would be more meaningful if they decorate the entirety of their houses with it. Around the 70’s, they have called their celebration “Pahiyas” coming from their local word “Payas” which means “to decorate”. And with the blessing from the church, the festival came to be known as the Lucban San Isidro Pahiyas Festival. 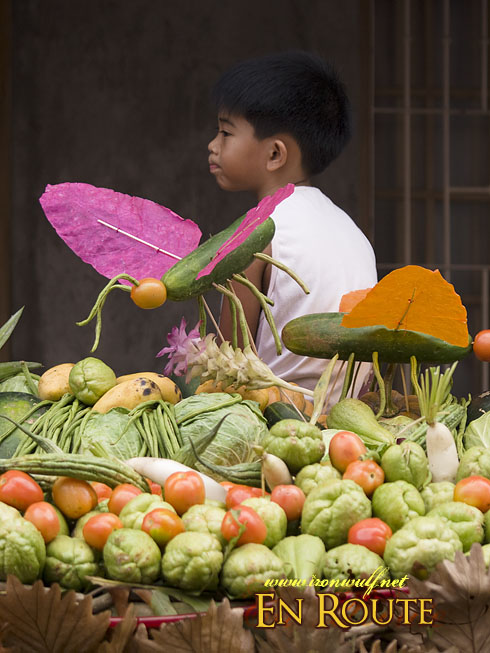 Fastforward to this present, the Pahiyas still draws quite a considerable crowd. It was four years ago when I last visited the festival and I thought it was high time I visited again. Thank God from an invitation from fellow Pinoy Writers member, Arlene, I jumped in at the chance to experience the festival again this year. So the evening of the 14th of May, accompanied by a Arlene and Migs, who turned out to be the brother of a person I knew, we headed to Sariaya. Quezon where we’ll stay at the place of another Pinoy Writer member, Nova. 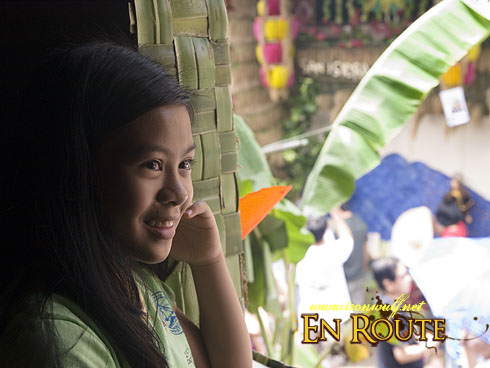 Pahiyas through my window

I like going to this part of the town since the travel fare is cheap. Just hopping on a bus to Lucena, either by Jam or jac liner cost only around P240 for a 4 hour bus ride. But since we’re staying in Sariaya which is an hour away we only paid P190. The next day, we hopped on a bus to Lucena for P17 for 30 minutes then another jampacked jeep to Lucban at P30 for another half hour. Then, a short tricycle ride to the Town University where the walk starts. 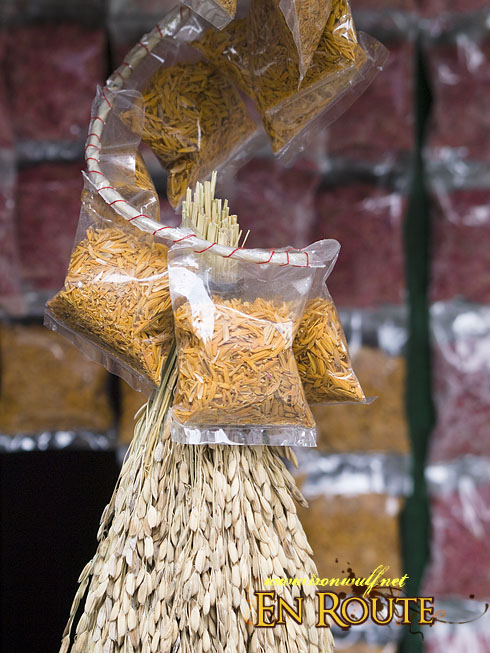 A lot has changed during the past 4 years. I remember a large part of land in front of the school which used to be an open lot. We parked there the last time. But now rows of establishments popped up along the streets from fancy restaurants to sari-sari stores and eateries. 7-11 has even invaded the town. Development has certainly landed. 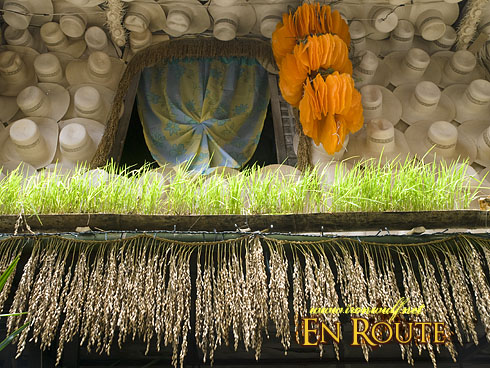 A house of hats

Commercialism has also invaded the streets of Lucban. Soda drinks, alcoholic drinks, even cereal drinks and telecom companies have used the festival as a platform to promote their products and services. I know they were doing this before with small booths at the side of the streets but now their large tents and towering props would block the way before visitors can proceed to the houses. 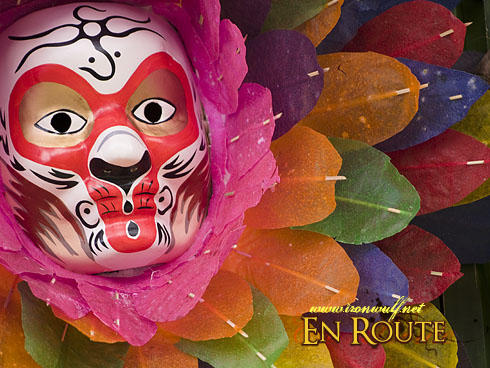 At the town center stands the beautiful church of Lucban. Crowds gather there, bemused by the dancing mime adorned with organic decors and kipings. It was like four years ago, there was a mime as well but dressed differently. We headed left where we started our tour of the houses decorated with kipings and other creative patterns using organic materials. Pahiyas wouldn’t be complete without the kiping. 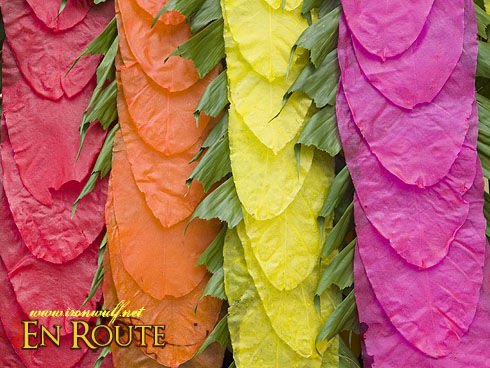 The Kiping is a leaf-shaped wafer made of rice and comes in different colors. The name Kiping actually came from a name which describes how laborious the process of making one which is “Kipi” or “Kinipi”. It’s a time=consuming process where a heavy object is placed over a dough to squeeze out the water. Then, it is kneaded with desired colors until semi-liquid and poured thinly and evenly over a leaf. This process is repeated depending on the quantity they want to make. Then, they lay it on an a square bamboo big enough to fit all the leaves then cook it in boiling water for ten minutes. It is left to dry overnight. Once dried the next day, they remove the Kiping from the leaves then bundle them together and then place a heavy object on the bundle for six hours to flatten the Kiping. 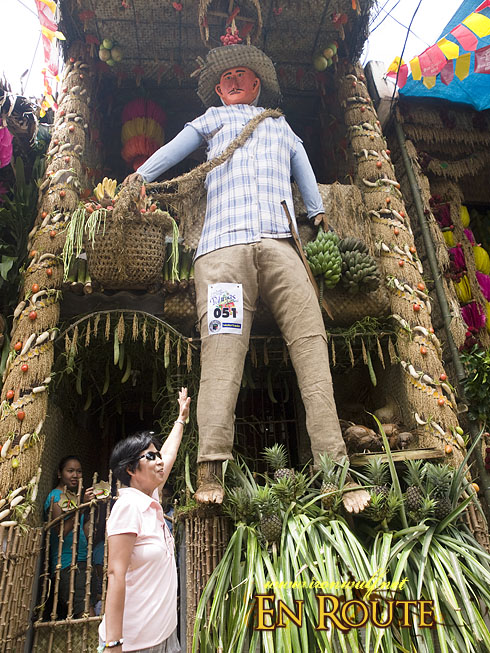 The combination of colors and patterns make for the colorful designs on the houses. Each year each house on Lucban where the parade would pass by would decorate their house and compete for the best prize. However, I noticed that only a few houses really went all out in decorating unlike four years ago that there were really some showstoppers on every block. 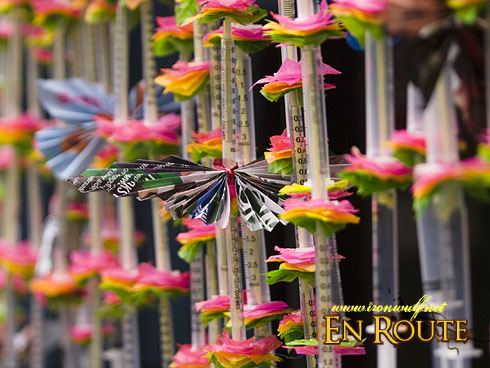 It’s a sad thing that a lot of houses decorated just for the sake of decorating. Does this also reflect our economic condition that a lot people decided not to spend too much on decorations? But in tight situations like these, creativity also comes to the fore like the use of used syringes to create vines where paper butterflies hang. Woven hats enshrouded the entirety of one house. And there’s even a gigantic robotic farmer. 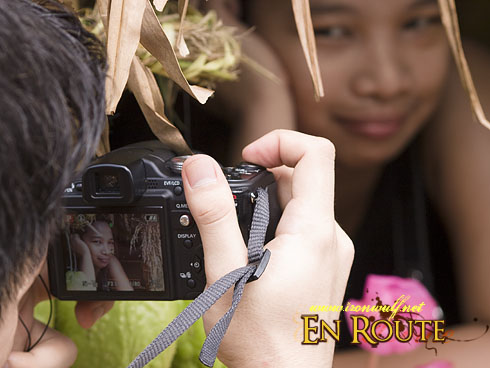 Whatever crisis is looming over, the ambiance still feels festive. It never stopped photographers to try to capture the colors of Pahiyas. Even a lone lady traveler equipped with her own compact camera on a tripod didn’t stop her from setting her timer as she run towards the house and have her picture taken with the decors, irregardless of whether someone would ran away with her camera in the opposite direction as she runs towards the house. 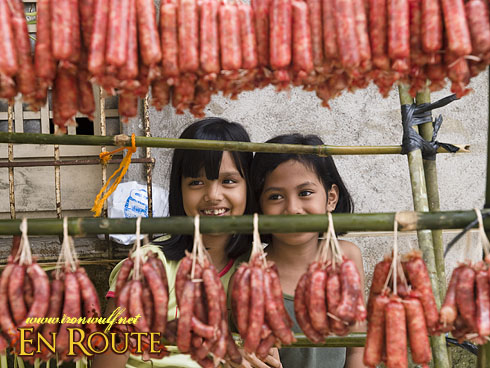 Going to Pahiyas is still a lot of fun despite the creeping commercialism and the effect of financial crisis lessening the number of Kipings hanging from each house. It’s great that even at these times, the people of Lucban still has something to celebrate and show the bounty of their harvest for. It’s counting our blessings that is more important however little these may be. I think that’s the spirit of Pahiyas. And oh yeah, I didn’t forget to buy those langgonisas on our way home.