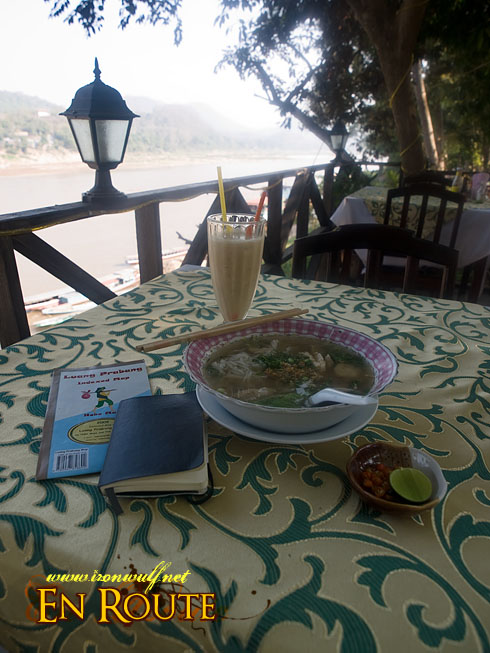 Breakfast by the Mekong River

I was swatting mosquitoes while sitting on the Northern Bus Station in Vientiane. It was 7:30pm, 30 minutes before my boarding time and I started applying a mosquito cream lotion on my exposed skin. There were several buses online and I wondered which one would be the VIP bus I would be taking. I saw other foreigners starting to move on to the last bus on the right. Yep it was our bus, “Luang Prabang” as the sign says. I placed my large pack at the lower storage and hopped in. 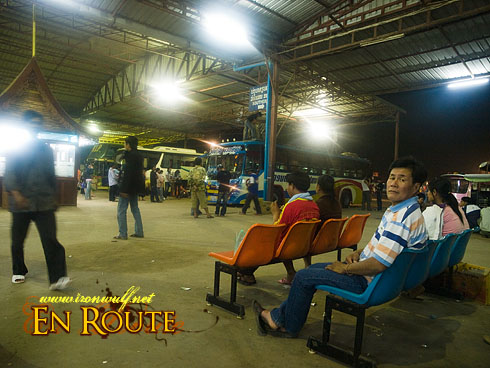 The VIP Bus to Luang Prubang is not even close to the VIP Bus I took from Pakse. It looks like an ordinary aircon bus not even close to the deluxe ones we had in the Philippines. I was even confused first on where to seat since the chairs have a couple of numbers one from the chair and one from the wall, finding out later the the latter is the correct one. It was still humid inside since the aircon was off but I had to sit on my chair. More than half of the passengers at the bus were foreigners. A mixture of Asians, Europeans, Australians and American. 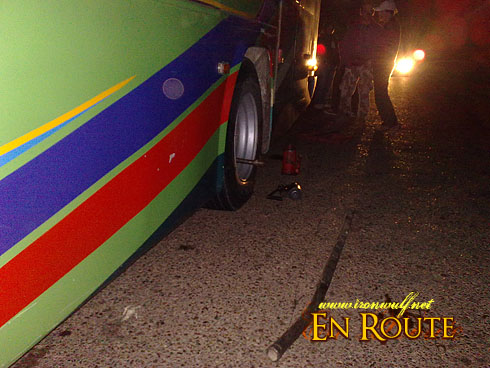 What I liked here in Laos, I noticed that most of the time, people leave on schedule. So when they say they leave at 8, they do leave at 8 so by that time, we were rolling off. After the ticket inspection they closed the lights and I popped in my headphones and watched a movie on my ipod. I was seated by the window and it was totally dark outside when we started climbing the road after the city. It was winding and rough on parts. It kind of reminded me of going up to Baguio. A few minutes after my movie finished I heard a loud sound at the back. We had a flat. It was almost midnight and we’re stuck in the middle of nowhere.

Morning view at the bus going to Luang Prabang

It’s a good thing the clear sky and bright stars amused us as we wait for them to fix the bus. Didn’t took too long as they replace the tire and we went on moving. An hour later we had a stop over and ate foe noodles, the same one I ate first time in Pakse. it was delicious and spicy as I liked it. We didn’t have to pay for it as it came with our bus fare. Just had to show our tickets. A few hours later it was getting bright outside and I got a glimpse of the beautiful mountainside of Laos. It was surreal and captivating at the same time. 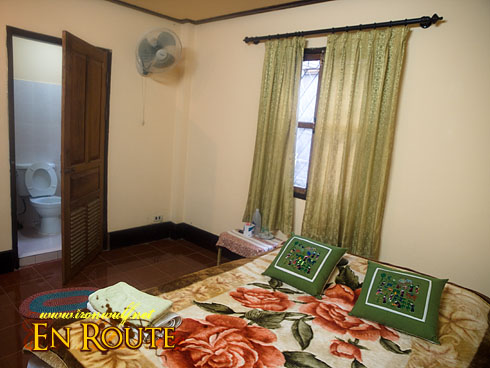 The journey from Vientiane to Luang Prabang took almost 12 hours as we arrived at the bus station before 8am. A sawngtheaw was there to pick us up and take us to the center of the city for 10,000 kip each. The weather was really cool that morning and the wind drifting by as we took the ride was cooler. The old Chinese folk group borrowed the Luang Prabang Map I was looking and told them where we’re headed. We got to the city center main road and I headed to look for my accommodation. It just feels great walking the streets of Luang Prabang. Everything feels so rustic and charming. Soon I found Levady Guesthouse at the inner street by the main road and got a fan room for 110,000 kip. After setting my things I went by the Mekong River which is a short walk from where I’m staying. While having breakfast I was plotting where I’m going. I’m finally in Luang Prabang.