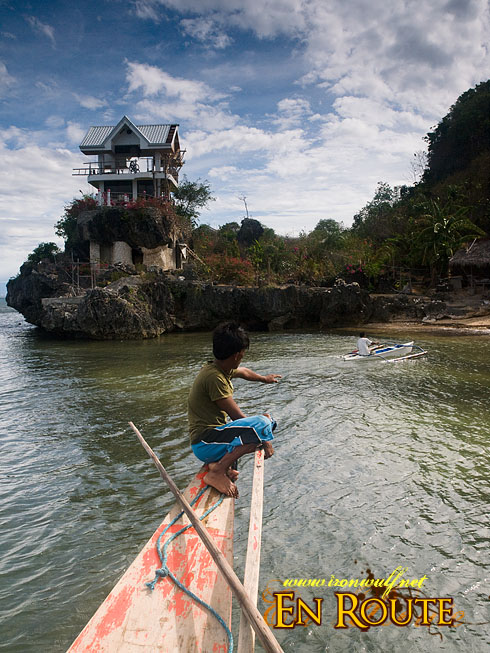 The southern tip of Mindoro has been under my radar for quite sometime. I have been to the famous Puerto Galera and even reached Sablayan as a jump off to the wonderful reefs of Apo Reef, but I have a nagging curiosity on what’s beyond these places. With a recent photo and writing assignment to San Jose Mindoro, the region’s hidden splendor was unveiled. 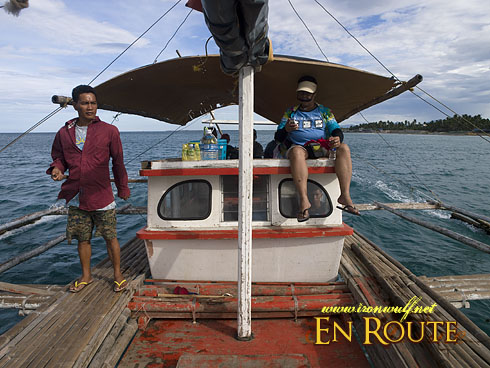 My PAL flight arrived earlier in San Jose Airport than the expected time of arrival. Shortly, my hosts arrived to take me to the resort where I would be staying. I was greeted by a jovial chubby man by the name of Mar Raro who turned out to be a famous hard hitting commentator who doubles as San Jose’s Tourism Office. With him is the well poised lady Mrs Beth de Lemos, the resort owner of Villa Paulina. They were expecting to see someone older, Mar said, which was a bit flattering since I was working there both as a Photographer and a Writer, camera on one hand and a notebook with pen on another. 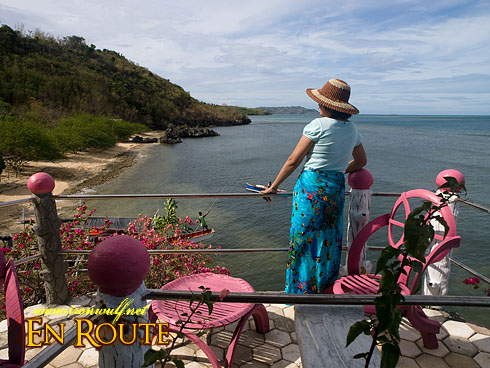 We drove off the airport and driving the coastal road, i found the air very soothing that morning. I think it was only around 10-15 minutes drive until we arrived at the Resort. I quickly left my bags in my very exquisite room. Since we were in a hurry I decided to inspect the resort later and head out to the dining hall for our quick breakfast. 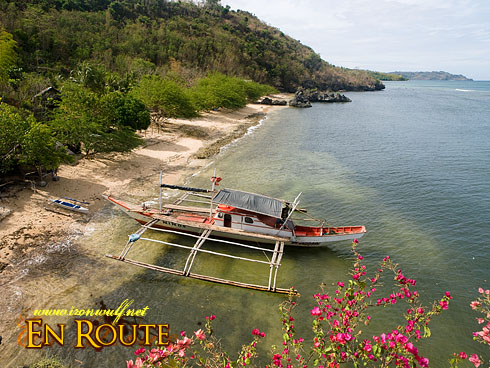 Having a casual conversation over breakfast I learned that most of the residents of Mindoro originally came from different parts of the country. San Jose, which was named after their patron saint, St Joseph, currently has the most populated municipality in Mindoro consisting of Ilocanos, Batanguenos, Visayans and Mindanaoans. It also has a portion of population that includes the indigent Mangyans and foreign immigrants. This got me real curious as to why these people who were once just visitors of San Jose decided to settle here for good and make it their home. With that question in mind, we set off to explore Mindoro with the company of Mar Raro along with some members of the de Lemos family of Villa Paulina. 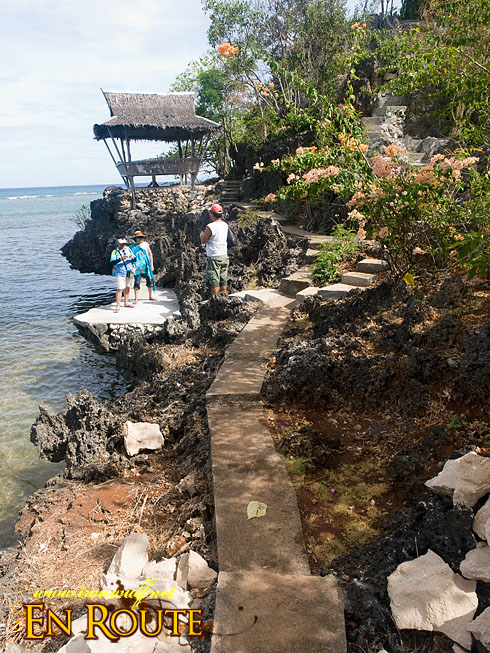 Cemented pathways along the side of limestone cliffs

We had a large outrigger boat, big enough to fit around 10 people or more. It was the start of our island hopping adventure for the day. There are three major islands off the coast of San Jose, namely Ilin, Ambulong and White Island. Our first stop was Ilin Island, the biggest among the group of islands which is composed of 11 baranggays. It is located just between the San Jose coast and the Ambulong Island, making it an easy first stop. 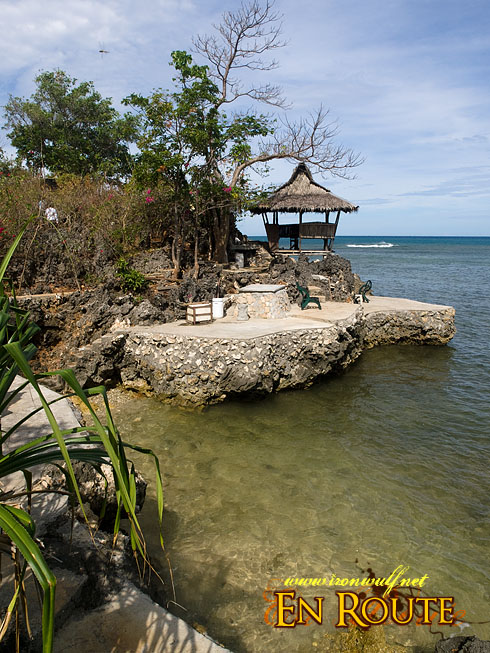 The waters were moderately rough and the sky was shifting from cloudy to sunny when we were sailing towards Ilin. Mar was relating some facts and trivia while we on our way to the island. Our first stop was the Cueva Cansubong or the Cansubong Cave Resort which former San Jose Mayor, Atty Ernesto Javarata, was developing. It was less than an hour’s ride when we saw a beautiful two story house being built and perched scenically above a cliff. 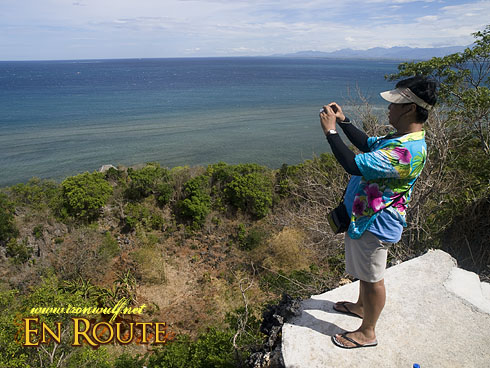 Mar Raro at the Trail Summit enjoying the view

The beach of Cansubong is nice but what’s really beautiful here is the park and pathways slowly hand-built by Mr Javarata, who greeted us and showed us around his place. Now on his early 70’s, Mr Javarata narrated how many years ago he stumbled on this spot above the cliffs and fell in love with it. With his family now all grown up and living their own lives, he spent his spare time slowly building the place with his bare hands. As small portions of supplies came in, he built the small pathways, chipping through the lime stones and cementing them. 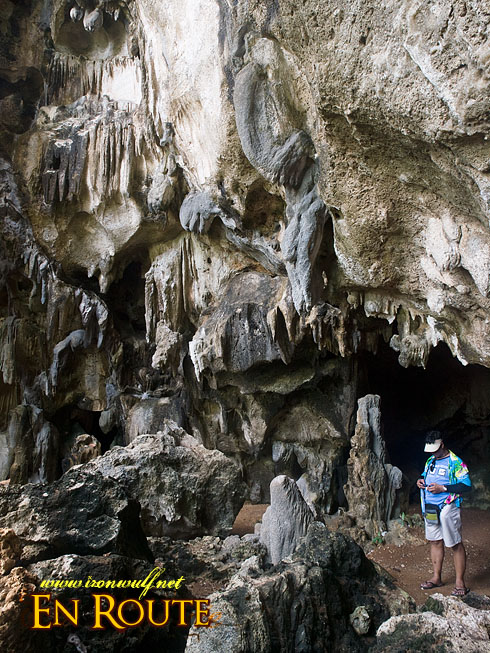 One of the caves in Cansubong

Now, the narrow cemented trails are jutting out the sides of the craggy lime stones being battered by the waves of the sea. Then snaking through a forest trail leading up to a higher ground where a majestic panorama of the sea and Ilin’s ruggedly beautiful shoreline await. The trail continues on downward towards a couple of caves with huge chambers sporting impressive stalactites and stalagmite formations. There are several other caves in the area but Mr Javarata chose these easy ones to showcase first. Nature lovers would surely enjoy this trail. 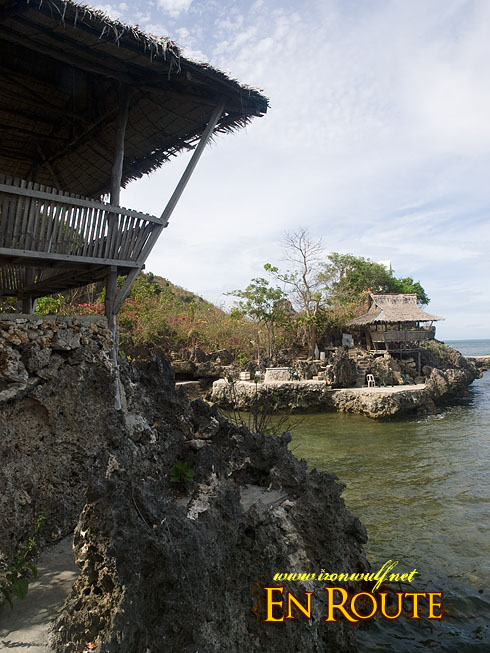 Currently, Cansubong Cave Resort is continuously being developed with the vision of Mr Javarata who considers the park as his labor of love. It’s not a full fledged resort but is open to everyone who would like to visit for short nature treks, cave explorations, swimming, picnic or overnight camps. Cottages and resort facilities picturesquely perched above the limestone rocks are available for picnics or overnight stays. Resorts from San Jose can arrange a visit.