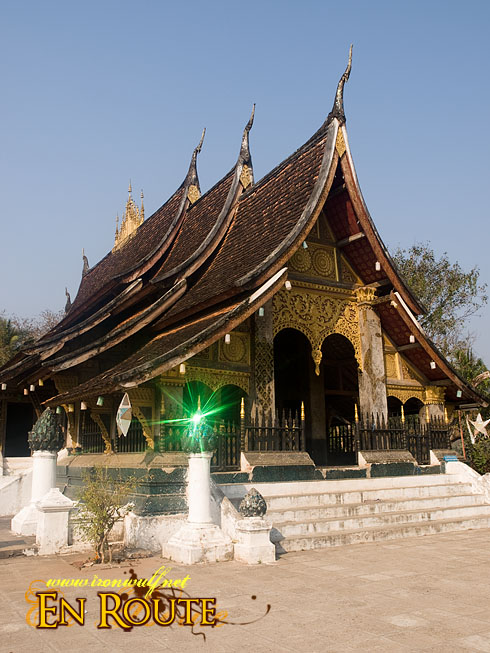 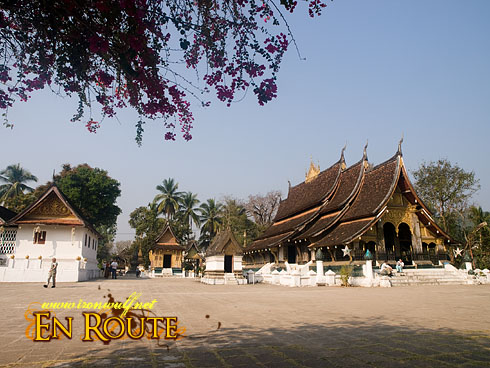 Found at the northern tip peninsula where the Mighty Mekong River meets the Nam Khan River, the temple can be accessed both by the river and a couple of entrances within the city. There’s an entrance fee of 5000 Kip to enter the temple grounds. It’s a large are with the main sim fronting to the northeast, a funerary, a chapel, several stupas and other structures. 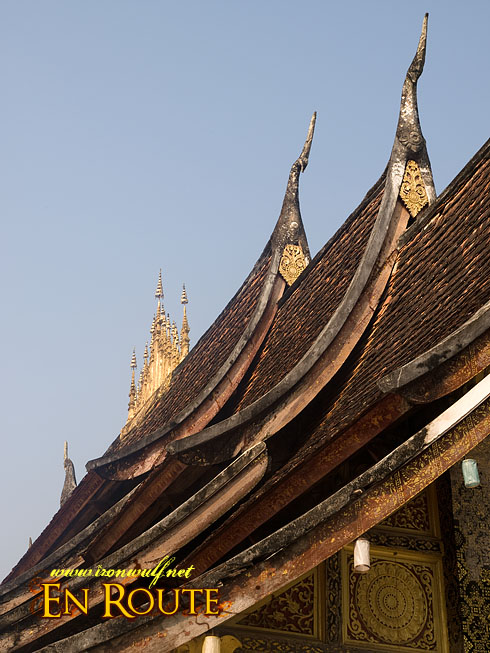 Having looked at several temples, it’s easy to dismiss them that they all look similar already. But closer inspection revealed why they considered Wat Xieng Thong as the most magnificent of the lot. Constructed in 1560, it is one of the old temples in the area. Being under the royal patronage until 1975 and surviving the Black Flag Haw sacking of Luang Prabang in 1887, the temple is mostly intact since it was made. 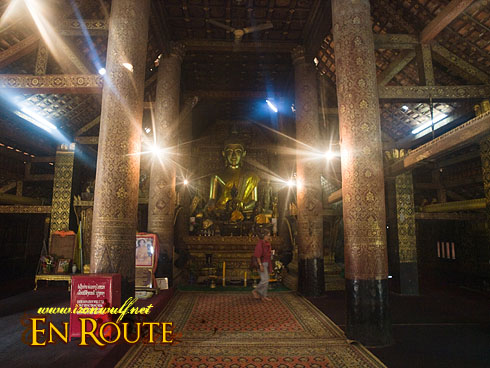 Wat Xieng Thong has a distinct Lao design as can be seen from the low sweeping roof heading up. I went inside the dimly lit interiors and found an elaborately designed sim interiors. The golden Buddha looks elegant as it is framed by two wooden columns heading up to the ceiling where there are several stencil designs in gold. 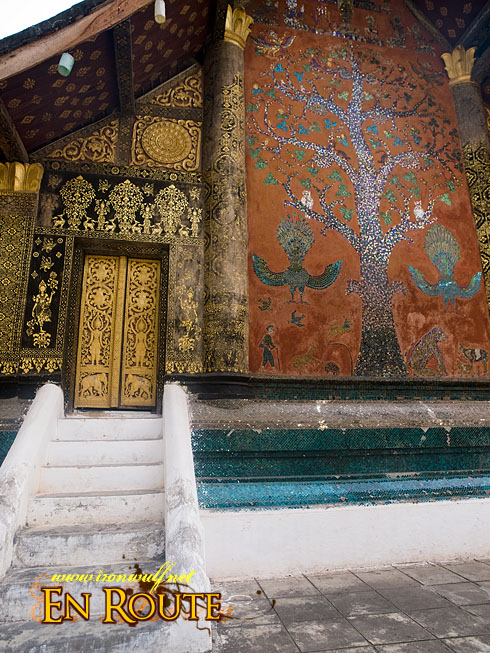 Going out at the back of the sim is an beautiful ceramic mosaic illustration of the tree of life. The seramic was done in 1950s as celebration of 2500th Celebration of Buddha’s Nirvana. Though it was made in commemoration of Buddha, the tree of life was pretty unique since it illustrates a story of a local hero from a novel, Siaw Sawat which is more about the village life than religious. 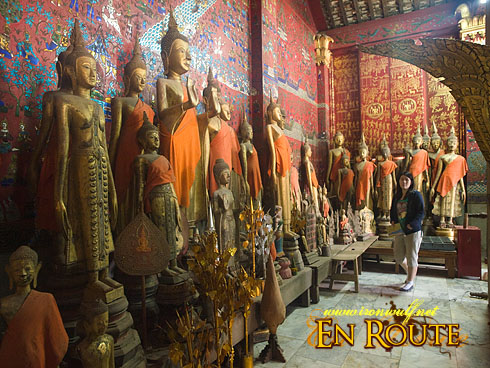 Inside the Funerary Carriage House

Opposite across the sim is the large Funerary Carriage House. Inside I found a large Carriage like boat which was said to be designed by local artisans. It has urns holding the ashes of the royal family except for King Sisavang Vong, the Queen and his brother. Aside from the remains, the house holds several items like old Buddha statues, glass cabinets, puppets and other Buddha images. It feels like a store room with all these antique items as well. 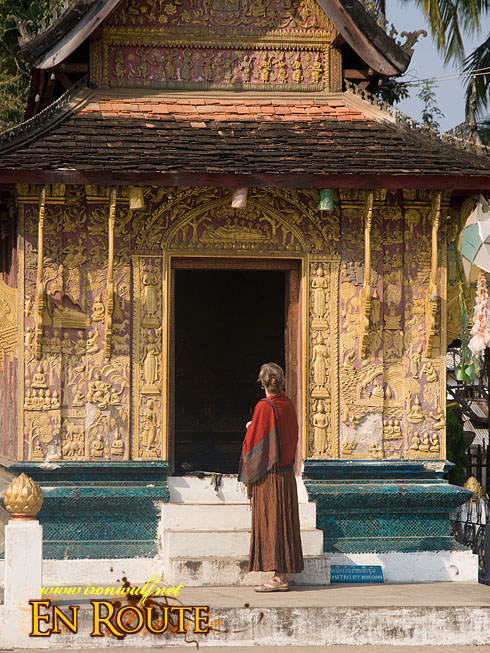 East, just beside the main sim are a couple of miniature halls before the main monk’s quarters. Wihaan has very elegant facade for a small hall (Haw), there were several people here offering their prayers as it is open. There is another hall at the back called the Red Chapel which also has an elaborate facade. 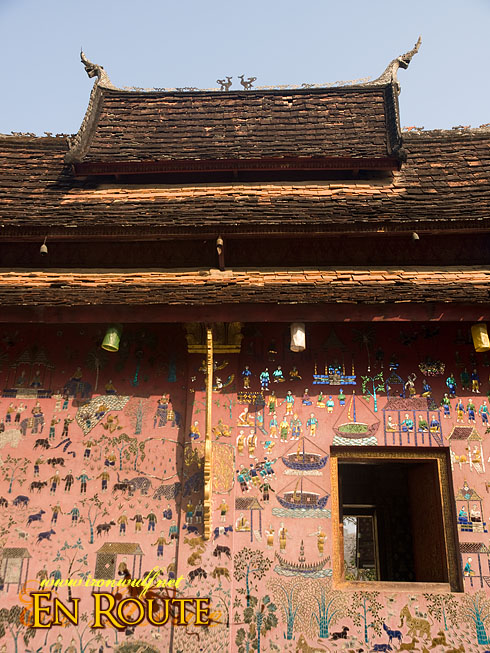 The Red Chapel was said to hold a rare reclining Buddha that dates back to when the temple was constructed. It is said to be rare since the style is distinctly Lao. The Buddha image was said to be exquisitely proportioned and the hand that supports the head was gracefully done. Unfortunately, the Red Chapel was closed when I was there and I wasn’t able to see it. 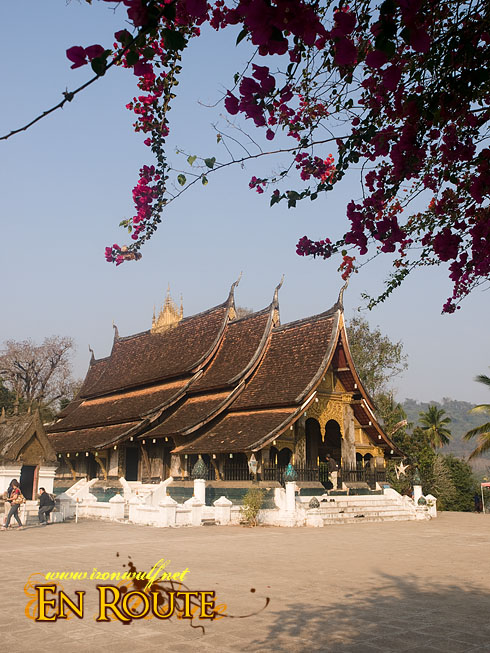 Wat Xieng Thong Under the tree

I enjoyed my time in Wat Xieng Thong, I found myself sitting at one of the benches under a tree just looking at this Magnificent temple. Since this is the must temple to visit in Luang Prabang, I just had to have my I-was-here photo taken. With several foreign tourist around I had to find an english speaking one and shamelessly ask to have my picture taken with the temple. The disadvantage of traveling alone is less self-portraits. After having my picture taken, I walked to the inner road exit/entrance which leads straight to me soon to be former lodging.