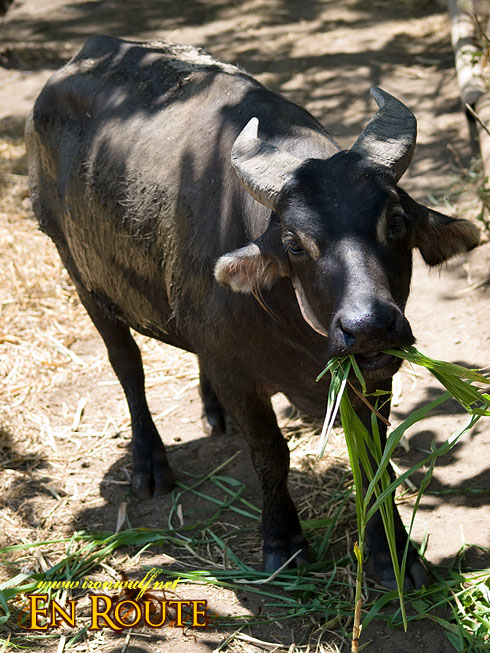 I enjoyed a night of rest at Villa Paulina Resort and glad I didn’t have to wake up too early on my second day in Mindoro. This time we’re going into the mainland up towards the north western part of San Jose to get up close to see the rare Philippine Tamaraws. The Tamaraws are endangered species of buffalo, scientifically known as bubalis mindorensis. They can only be found in the Philippines and endemic to Mindoro Island. It’s gonna be an exciting day. My service from Villa Paulina drove me early at 7am to another resort, Sikatuna where I’ll have breakfast and meet my companions for this trip. 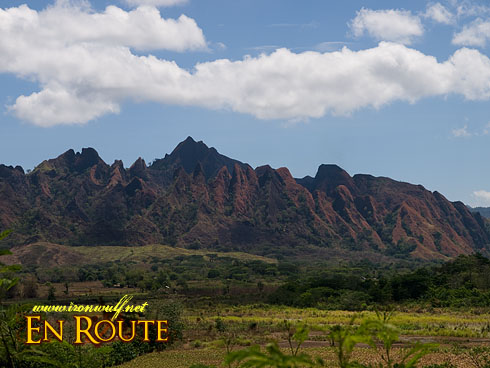 Passing by the rugged beauty of the Fire Mountain

I met with Mar at Sikatuna Resort where we had breakfast. Later, Lyanne, Lou and Mam Lina others from the De Lemos family at Villa Paulina soon followed. We were all excited for this trip since we would be getting up close to one very rare animal species along with some surprises along the way. Soon, our ride, an open Jeep arrived and came along is Rodel, one of the members of Tamaraw Conservation Program (TPC). He told us snippets of the process on their conservation. 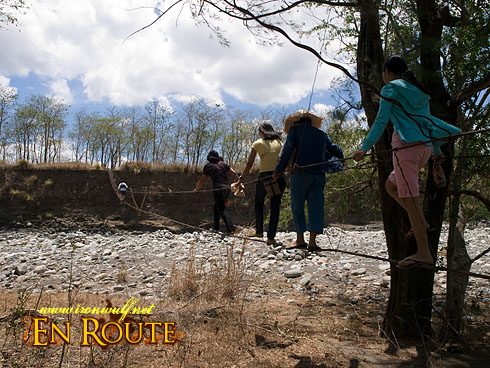 We moved out before 9am. Rodel left us but we were accompanied by the head coordinator of TPC, Mr Danilo Roca. It was around an hour’s ride towards Barangay Monte Claro where the Tamaraw Gene Pool, the breeding ground and head office of the TPC is located. Once we got out of the city, we navigated through rough and dusty roads heading to Monte Claro. We made a brief stop mid our journey on the road to view what the locals call the Fire Mountain. It was a beautiful rugged mountain with ember peaks resembling the flames of fire. It was a popular destination for mountain climbers in San Jose, Mar said as he had climbed it many years before. 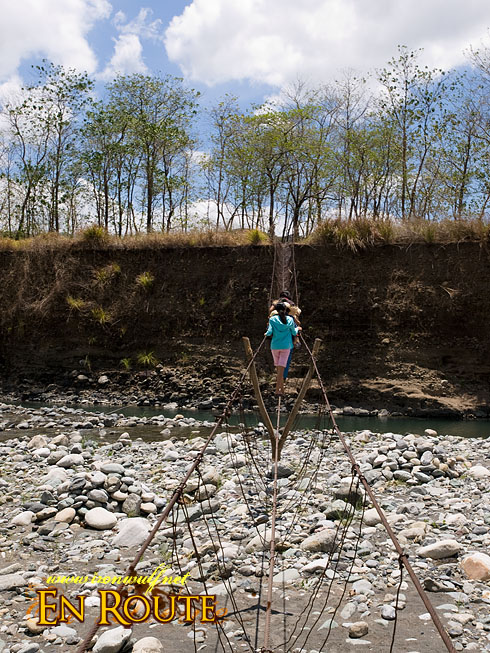 View from the cable bridge

An hour passed, we have finally reached our jump off at Barangay Monte Claro. We dusted off of the road dust which have somehow covered our clothes and skins and headed to the Tamaraw Gene Pool office. But wait, we had to cross a bridge first to pass over a river. What made this bridge exciting was it was a cable bridge and only a couple more wire on the sides to keep your balance. It was fun traverse actually. In truth this is just one option since you can cross on the river on foot. But when the water is high, people use this cable bridge to get across. 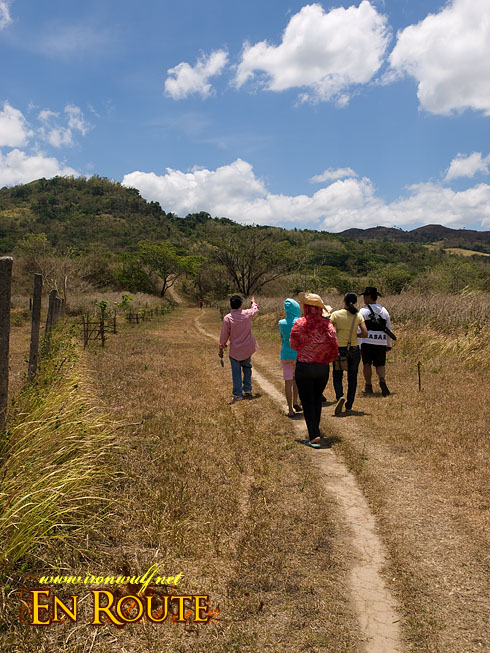 A short hike under the sun

The Tamaraw Gene Pool center is your typical provincial office. It to look more like a rural wooden walled school, but houses the members of TPC and also a learning ground for more information about Tamaraw conservation. The TCP which was established in 1979 is an independent organization. We registered here, did a briefing and soon hiked for a few minutes to find an enclosure where there are two Tamaraws held captive for study. 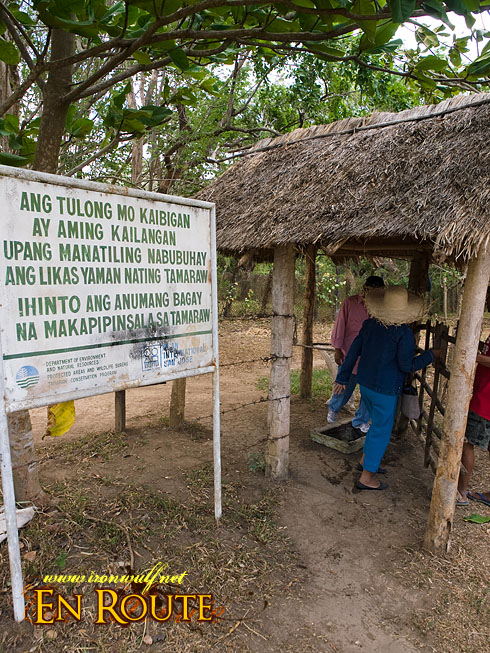 Desensitizing upon entrance and exit

We had to sanitize the soles of our footwear before we entered a large enclosure where they kept two tamaraws. Since these territorial creatures have acute senses, we can’t leave any trace of our scents in the area. They are so territorial that the two tamaraws there are kept on two separate enclosures large enough for them to roam around. We met Kali, the young and energetic Tamaraw and the mild Mimi on the other enclosure who is mother to Kali. I was actually expecting tamaraws to be huge creatures but they are actually cute and small like pokemons about 60-70% the size of a common full grown Carabao (Water Buffalo) . The tamaraws are also characterized by the unique v-shaped horns. 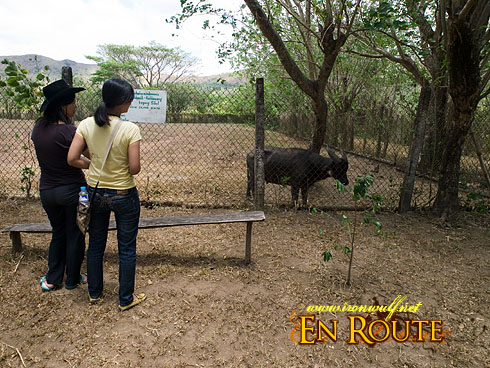 I was sad to learn that their numbers have decreased to an alarming 265, including the two in captivity, whereas they were more than a thousand 10 years ago. TCP head coordinator Danilo Roca explained that the large decrease in numbers was brought by a spread of disease from imported cattle, deforestation and also poaching since a tamaraw’s head fetches for a large sum of money. The TCP and also the local government are closely monitoring the tamaraws by doing regular counts and studying their breeding patterns in order to preserve and hopefully add their numbers. 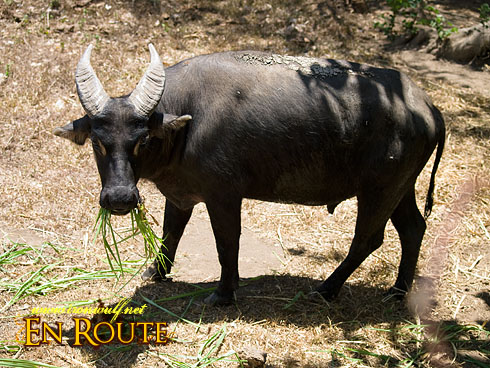 I was really proud and happy to have an opportunity to see a living tamaraw. It is very rare and only 1 out of 100 can claim they have seen one, even less. Before in the 90’s I only got familiar with them through the Philippine 1 peso coin. While I would like to see them in the wild which entails climbing the peaks of nearby Mt Iglit and Baco, and viewing them from afar through the telescope, I’m quite contented seeing kali and Mimi in their good health in captivity. I just hope that their numbers continue to grow and the TCP would get all the help needed in preserving these precious animals.