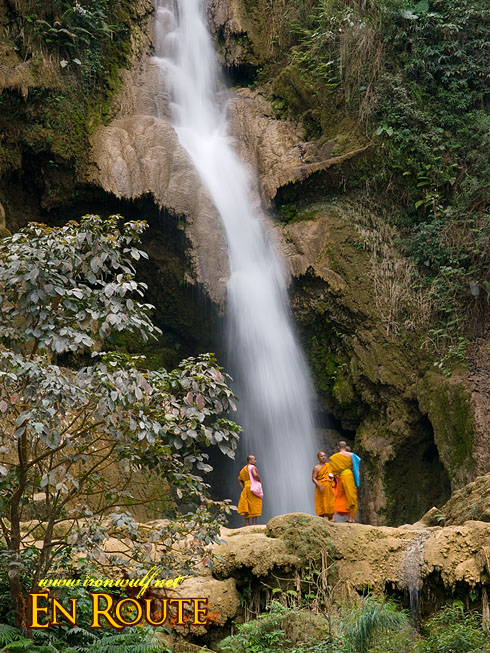 I checked out at Levady GH soon after my visit at the magnificent Wat Xieng Thong. When I got to Thony II they were still cleaning up my room at the upper floor. While waiting, I saw a small poster where it says that they can take me to Tat Kuang Si Falls for 50,000 kip round trip. It was pretty cheap than taking a sole tuk-tuk on your own which is around 150,000 kip. I booked to be included on the afternoon tour. 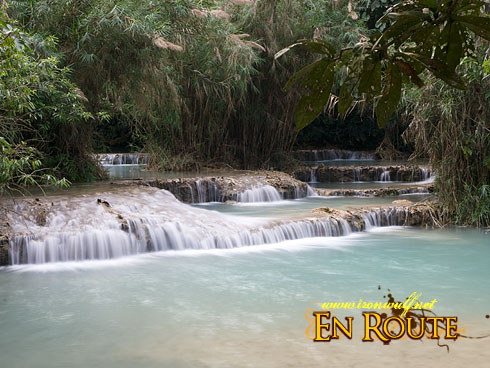 I left my bigger bag at the reception while they clean the room. I went to the nearby internet station to get updated on my mail and had a quick lunch at the nearby resto. As soon as the room was ready I got my stuff in and changed for the tour. I hear a knock informing me that the van is already here.

I knew from the start that taking this tour means sharing the van with several people. While I liked to go to Tat Kuang Si Falls on my time, I can no longer afford to pay for the vehicle myself. Joining tours like this is the cheapest way to go. It’s not even a tour as the Van would just drop you off at the site, wait there and go back to the city. 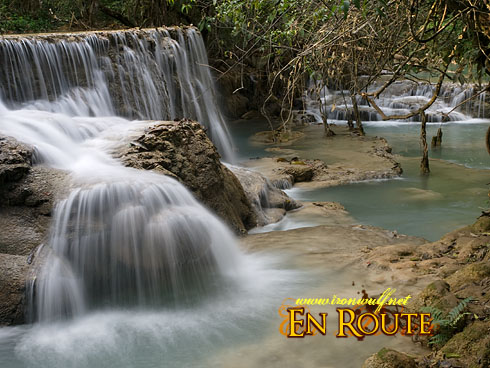 There was a great mix of people in the Van, from America, Australia, Thai, Israel, Russia and Britain. We made a few rounds around Luang Prabang in search for that Russian Girl before we finally got out of the city. As expected all seats were full but still has that comfort and we go into that usual traveler small talk of “Where you guys from?” and other stories you would expect from other travelers. 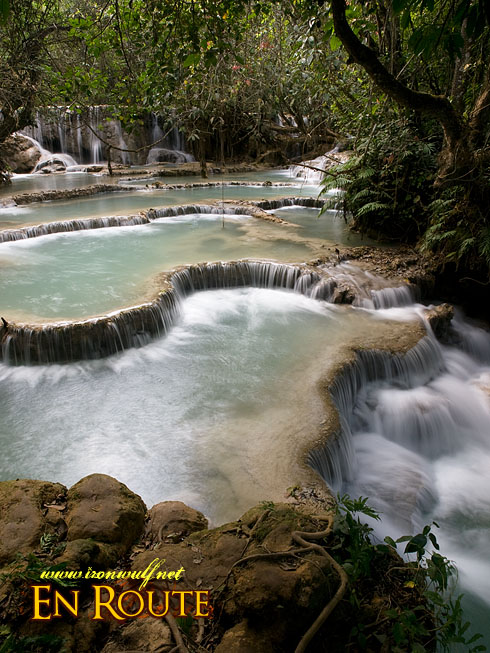 There was this American guy with a distinctly Thai woman with her. She actually thought I was Thai but told her I am Filipino. Then a curly haired guy that seems to be dozing off at the front row said “Filipino ka? Ako Filipino” in an accent typical of those Filipinos who have lived in the US for so long. I was surprised and excited at the same time that I get to meet another Pinoy during my travel. 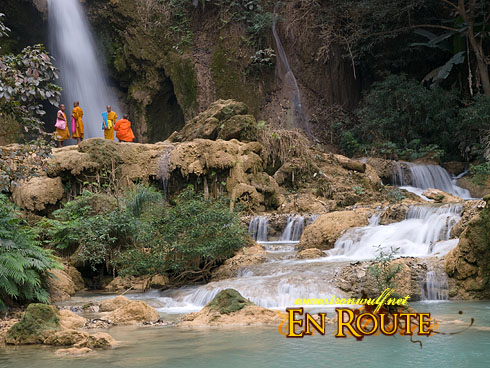 It took almost an hour until we reached Tat Kuang Si Park. There’s an entrance of 20,000 kip to get inside the forest park and follow an easy trail going to the falls. While walking I struck a conversation with Ronald, the Filipino-American guy. He has a thick curly hair, somewhere about 35-45 of age if I’m not mistaken. I learned from him that he’s doing a 3 months tour of Asia and has been around 54 countries already throughout his years of travels. Like some Americans I know, they work for several months then take several months off from their work and travel. How I wish we could do that here. 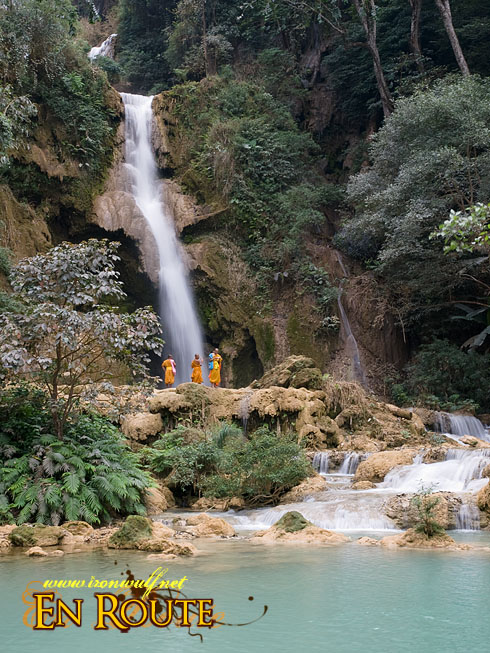 He says that Filipinos should travel more. In his travels he rarely sees Filipinos so he was quite surprised as well to see me. Sadly he hasn’t been back to the Philippines for many years now and I told him that he should find time to explore the country he was born since he’s already missing a lot. We made some more chit chat on updates on the country and more about his family while we explored the falls. 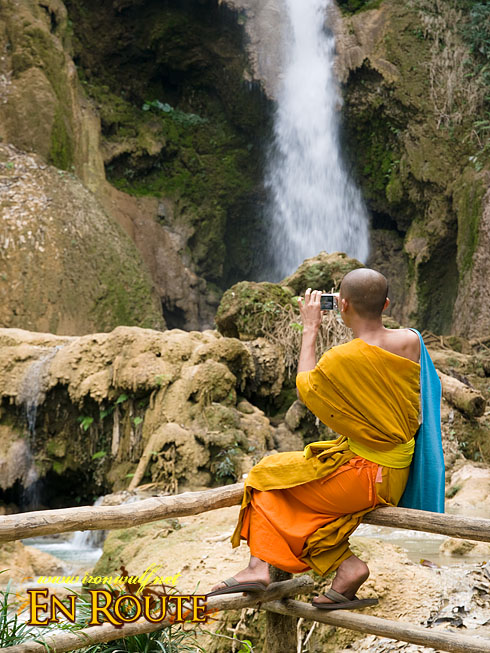 On the trail before the falls we passed by the Bear Conservation Center. There were a few black bears in the area but it pretty hard to take pictures of because of the poor lighting condition. We continued towards the trail until we got into the lower level of the waterfalls with a real scenic aquamarine waters.

Tat Kuang Si Falls actually has numerous layers going up towards the main falls. And from the main falls there is even another trail towards the peak of the falls. I actually liked Tat Kuang Si. It has beautiful cascading layers which also resembles several craters and the color is a clean aquamarine. 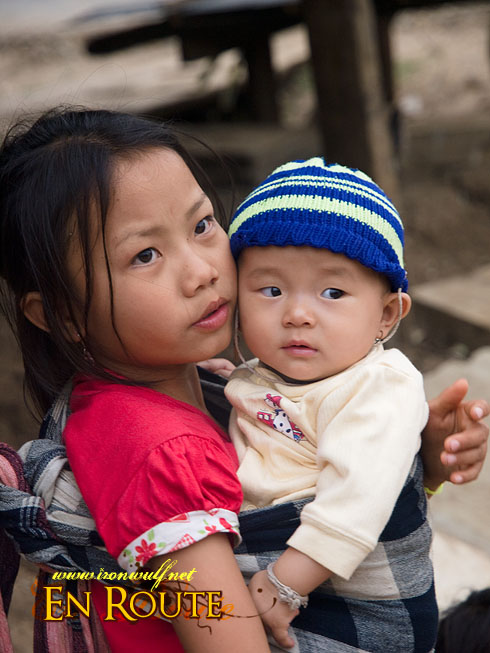 There were several monk tourist there as well which we had fun taking pictures of. With them there, the falls looks much better since it adds a story distinct to the place. Ronald has a Nikon D200 camera which seems to have gone through a battlefield. The LCD screen has a large crack and the body and lens were full of scratches. I wouldn’t think of it as functioning if I wasn’t able to use it to take his photos which he seldom does. 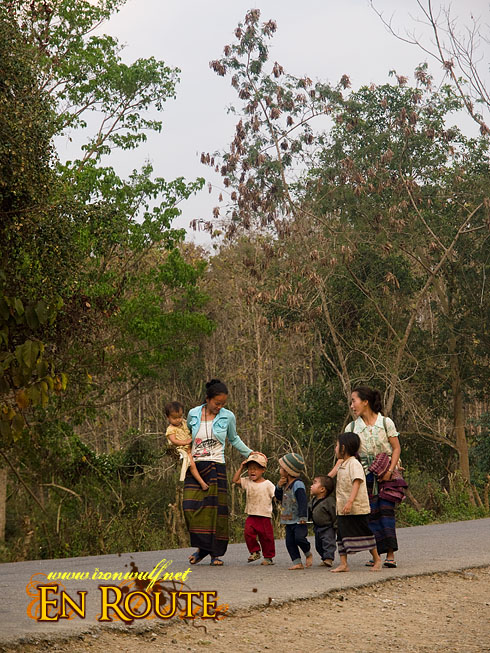 By 5pm we headed back to the city but made a brief stop to a small village where we went through this trail of vendors. Some guys bought some stuff while we just enjoyed looking and talking. Everyone seemed to have a great time. This one English girl was clicking proudly on some rice terraces as she doesn’t see that often. I thought that we had better looking rice terraces but kept it to myself. By the time we got to the city, everyone parted ways. I bid goodbye to Ronald and told him that he should try to come back to the Philippines. The rest of the guys went on different directions. As like any travel companions it was a brief moment of company but enjoyable one still.