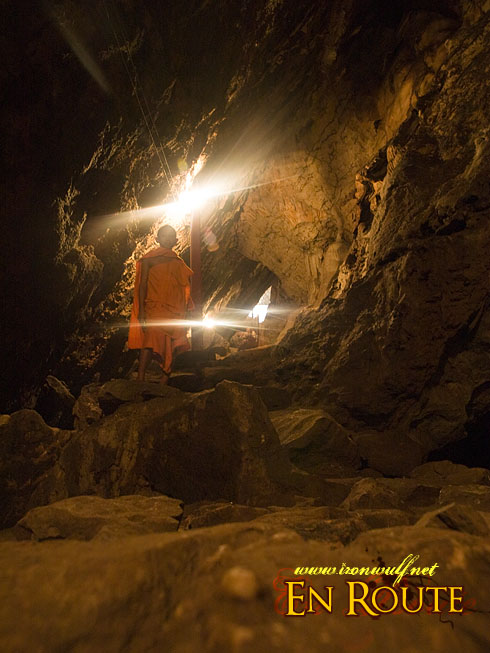 Somewhere around a 100 meters more after Wat Chom Phet, still on a dirt road but covered by tall trees. Across it is the Wat Long Khun Temple. It is one of the best looking temple grounds I’ve seen. The monastery looks new and the main sim is petite but beautiful likewise. Across the river, I noticed its directly across Wat Xieng Thong. 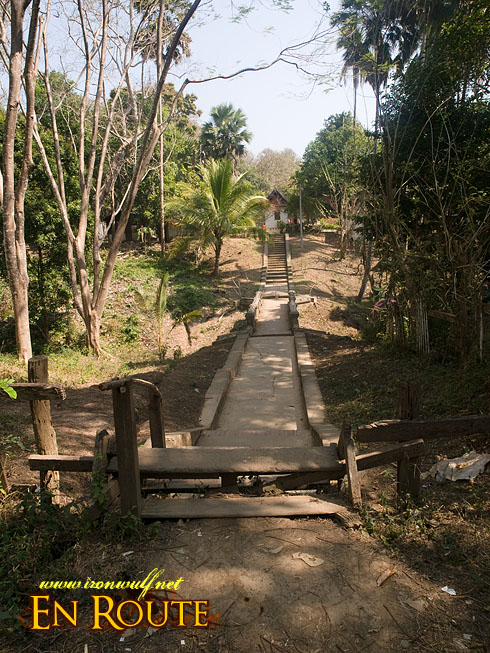 I stayed there for a while admiring the place. The main sim has a beautiful portico with very nice textured walls an elegant roof designs. Inside the small room the walls have fading but wonderful Jataka Murals similar but not as grand as the ones in Wat Si Saket in Vientiane. 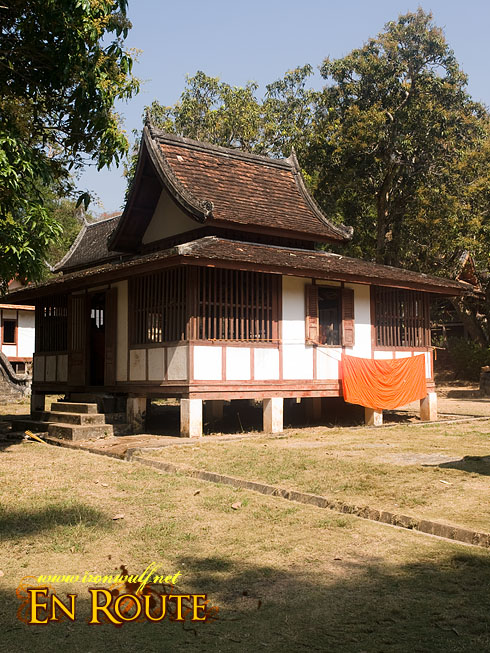 While sitting at the porch of the wat, there’s this young monk who kept approaching me. At first I thought he kept telling me “Kip! Kip!” and was asking me for money but then I realized after a while that it was actually “Cave! Cave!” and remembered there was a cave nearby. I told the young monk “okay” and he quickly took a couple of flash lights for us to use. 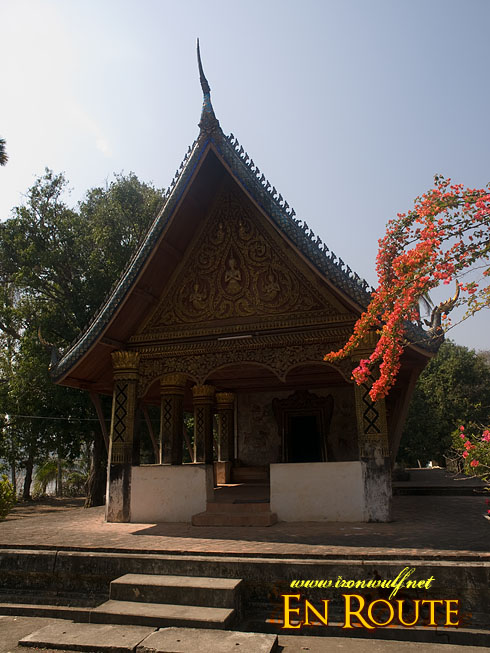 The young monk guided me through a narrow trail through a thin forest cover. I think we walked about less than a 100 meters until we came upon a large stone block entrance to a cave. It was a beautiful stair entrance with iron gates. It opens to a cave known locally as Tham Sakkarin Savvanakuha Cave. 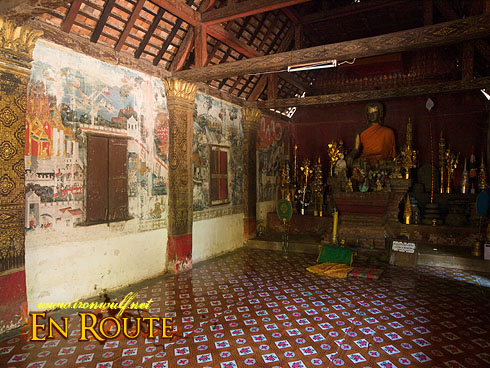 Inside the cave is a temple known as Wat Tham Xieng Maen. Inside this temple, which is more of a chamber, are stock holds of numerous Buddha images which has fallen into decay from ransacked and torched temples. The young monk points me to the important Buddha images on stone with his flash light. 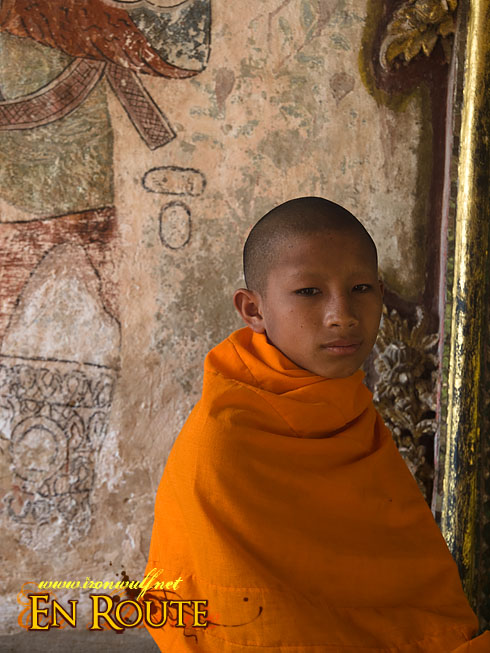 He left his slippers before the descending concrete stairs going down into the cave and he urges me to do the same. Barefooted, we walked down heading to the cave grounds. I felt from the soles of my feet the coldness of the cave soil, a little damp but solid enough to walk about. There were only a couple of lights from the cave mouth but once we got into the further chamber it was pitch black. 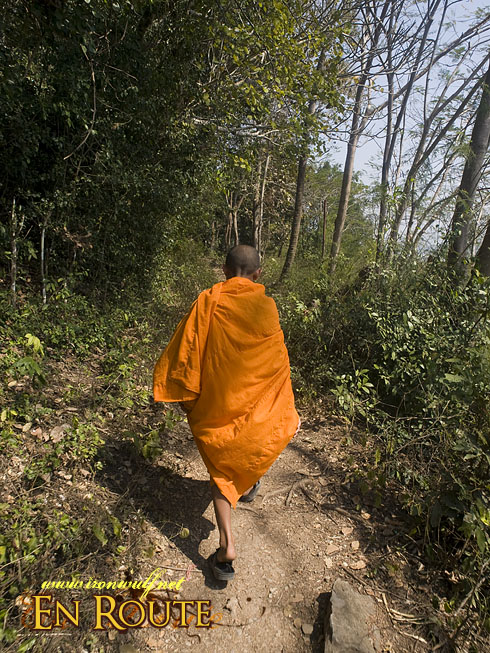 The lights from our flashlights illuminated only portions of the area we were heading, I don’t know where he was taking me but I know we went through several corridors, climbing a few chambers where he would light up interesting rock formations. I think we went in circles before we went outside the lit chambers. We saw a couple more guest with another young guide coming in. It was a really interesting experience. I know there is more to that cave since it said to go as 100m deep. 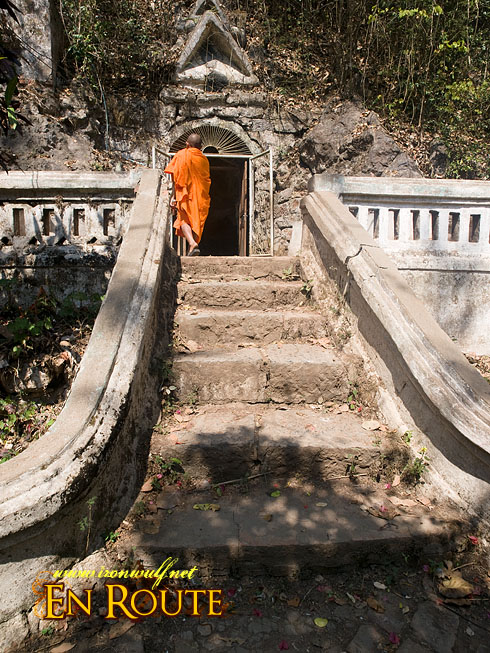 As we went out the cave I checked time and realized I only had a few minutes before my boat gets back to fetch me. I paid the young monk 10,000 Kip even though he was just asking 5000 Kip. Just a tip from me. He said “Good luck and travel safe” then went inside to follow his companions inside the cave. 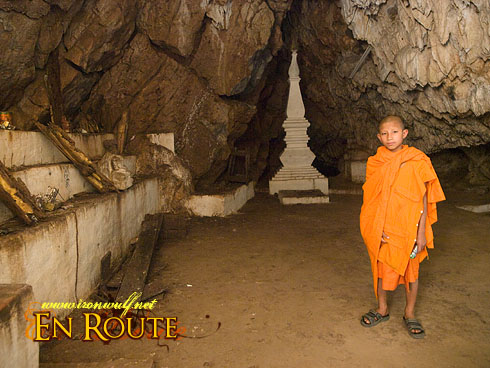 I went back the same way we walked. At Wat Long Khun I met this energetic kid with a dog on his head and beetles on a stick which is making it spin. I was so amused by him that I had to take a picture. I continued walking and stopped by this small store to get some drinks. A bit more expensive than the usual. When I got to the pickup point, my boatman was already docking by the river banks. 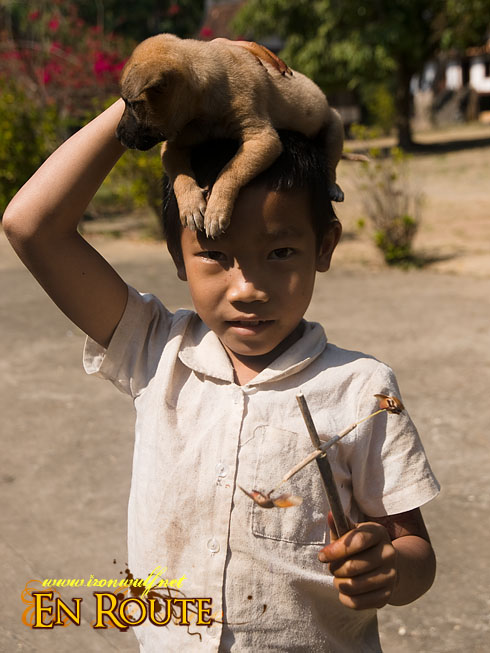