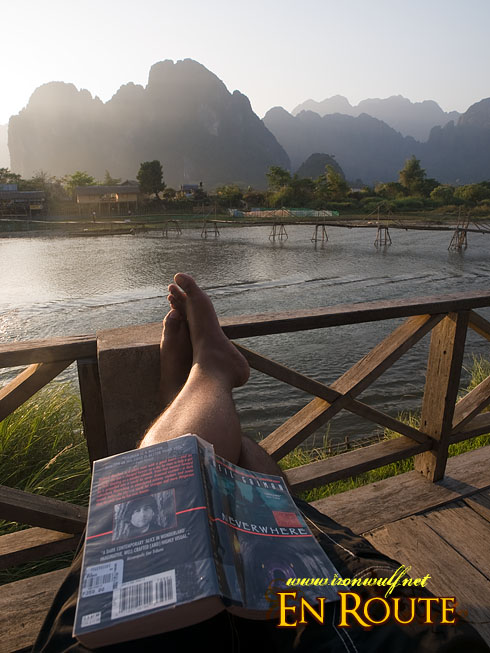 Chilling by the Nam Song River in Vang Vieng

When I got back to Thony II guesthouse after spending time by the Mekong River and eating dinner, I met Johnny by the entrance of the guesthouse. I met him before there and we had a little chat when I told him I’ll be going back to Vang Vieng tomorrow. He offered his Van service costing 100,000 Kip which was a small portion cheaper by going by bus. I agreed since I don’t have to spend another fare going to the bus station since the Van would be coming from the guest house. 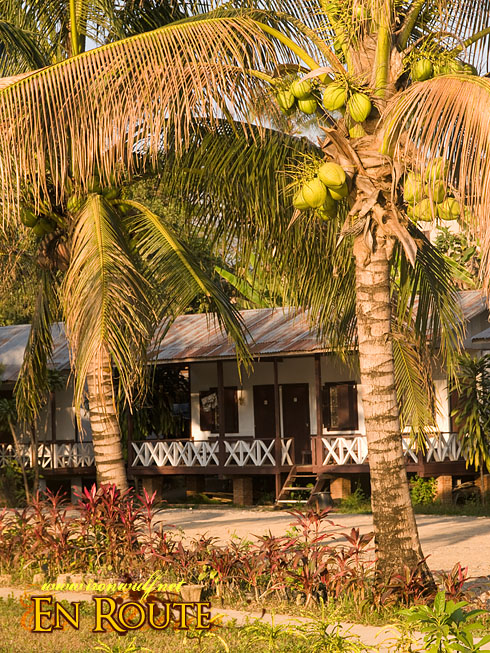 I got time for a quick breakfast nearby before we rolled off. As expected we had to make a few rounds around Luang Prabang and fetch some people to fill in the van. Yeah the van reached it’s capacity. Thank God I was the first one and got a good seat by the window behind the driver seat. It was comfortable and cool enough for the whole journey. 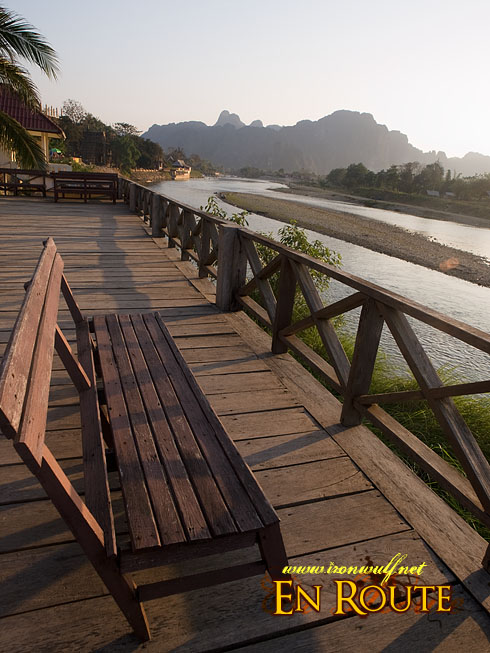 Bench by the view deck of Phoubane

We made only one brief stop along the way by lunch time and had a Baguette to eat and bring. I noticed that people from the van all group up depending on their nationalities. Europeans to Americans but I ended up talking to this middle aged American with his Lao wife and daughters. He’s fond of Filipinos since he has Filipino friends from the Military and swears that no many crosses with them since their good at fist fights and balisong knives. 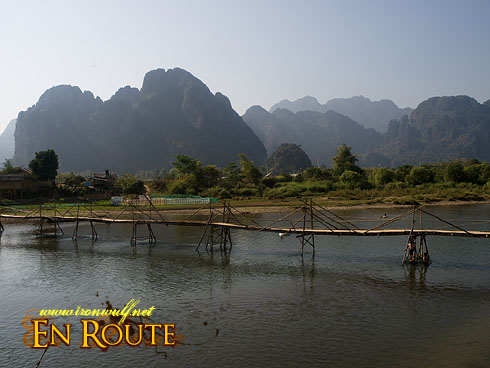 The journey took around 6 hours as we arrived in Vang Vieng town by 3pm. Vang Vieng is just at the border of Luang Prabang on Highway #13 almost halfway between Luang Prabang and Vientiane. The American Guy I was talking to narrated that 10 years ago, Vang Vieng doesn’t look like it was now. Before he remembers just knocking on some local’s house on a grassy road by the river since there wasn’t any accommodations nearby. Now the road is paved and accommodations had popped up like mushrooms. The family didn’t decide to stay and they’ll wait for the Van to pick up some people and head straight to Vientiane instead of staying. 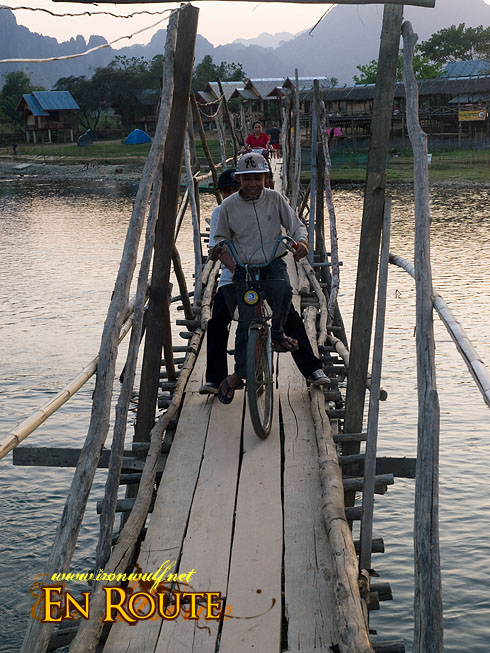 I bid them good bye and decided to give Vang Vieng a chance for a day. I searched for the accommodation by the river and found the single cheapest room at Phoubane at 50,000 Kip. It was a really ugly room. But hey, I’ll just stay here for a night so I might as well try it out. This decision I had to regret later. I secured my stuff and decided to go out and explore the place. 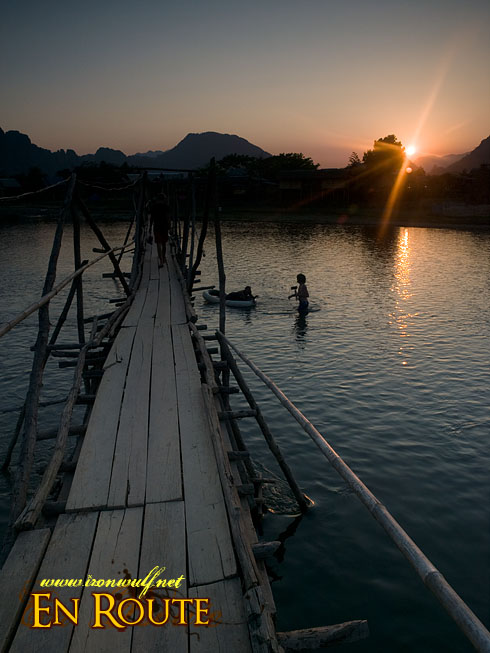 Vang Vieng is just a small place. It only has two main streets and some inner street which are filled with eateries, internet stations, restaurants, accommodations and most especially tourists mostly young adults. I went to one of the places there to have some shakes and snacks. People should also be careful here when they order as Vang Vieng is also known for drug peddling and some marijuana on some foods. There isn’t much to look around here so I went back to the river and just spent my time there observing while reading a book. 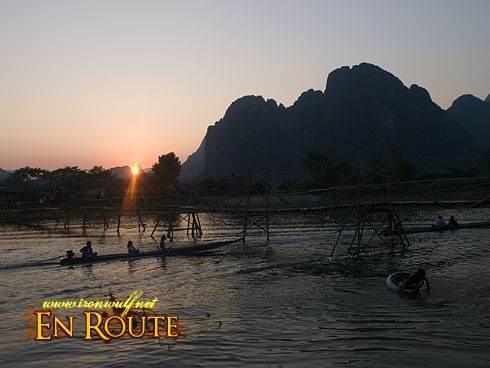 The town of Vang Vieng sits by the Nam Song River and across this river is an impressive vista or karst formations. There are lots of riverside activites here from tubbing, kayaking and motorboat sightseeing tours. There are also a lot of tourist hanging out by the river partying and drinking. By night I went back to the streets and headed to one of the sprawling pillow-filled restaurants for dinner. There are lots of restaurants here and they just show endless re-runs of the tv sitcom “Friends” again and again. I loved that show and got almost hypnotized into staying at the at that resto after finishing dinner. Had to tug myself back to reality that I didn’t go here for many miles just to watch tv sitcoms here. 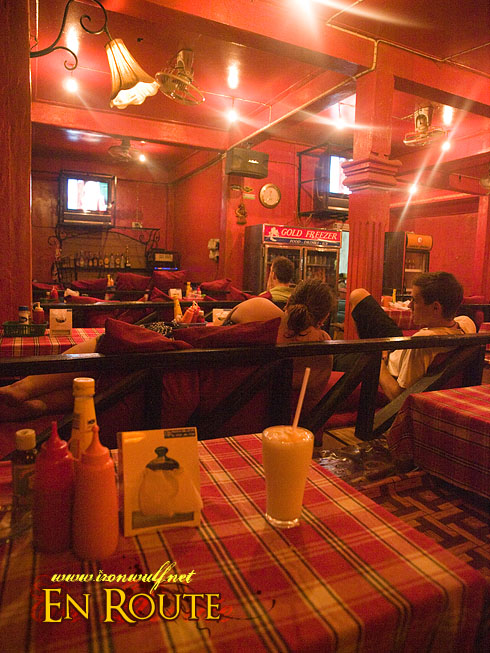 As the night grew deeper, Vang Vieng hadn’t bitten me enough to stay. I stopped by one of the internet stations to get updated and was aghast at their much more expensive internet rates than any other place I visited in Laos. I also noticed that they have Bus reservations there so I decided to buy tickets for tomorrow. My VIP Bus to Vientiane cost 63,000 Kip. 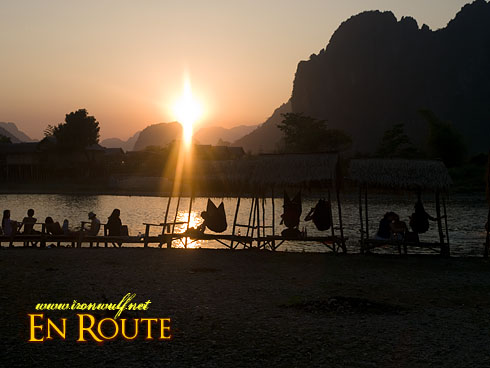 Drinking and hanging by the river

I decided to get back to my room and tried to sleep. This is when I regretted that I should have found a better place than this cheaphole since staying by the river was so noisy. I could clearly hear the rowdy crowds by the river. It also doesn’t help that there is an island bar not far from where I am staying. It was how I imagine a “Spring Break” would be. I didn’t get to sleep that much until early morning. 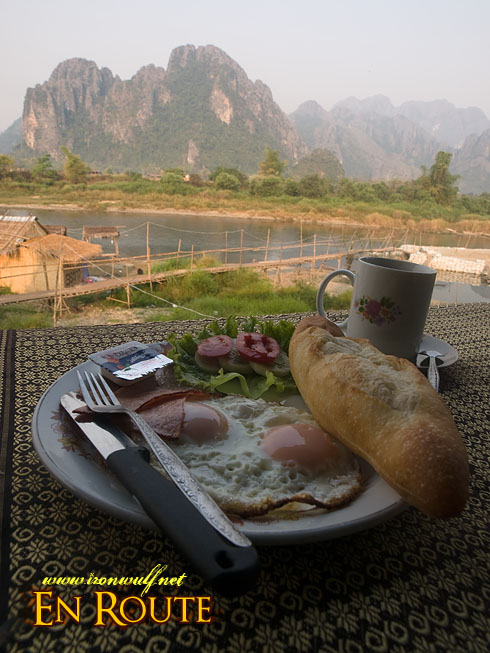 Breakfast by the riverside

I hastily packed my stuff when I woke up that morning and checked out. I just decided to have breakfast nearby and headed for the bus pickup at the internet station after. A small minibus came to fetch us. At first we thought that we would be going all the way to Vientiane via this minibus but it just rode us to the bigger VIP bus waiting by Highway #13. It was a comfortable bus and we left by 10am. I was glad I’m leaving again. I tried to like Vang Vieng, its Nam Song River and its beautiful karst but the tourist crowds, people watching endless re-runs of Friends is really not the place for me.