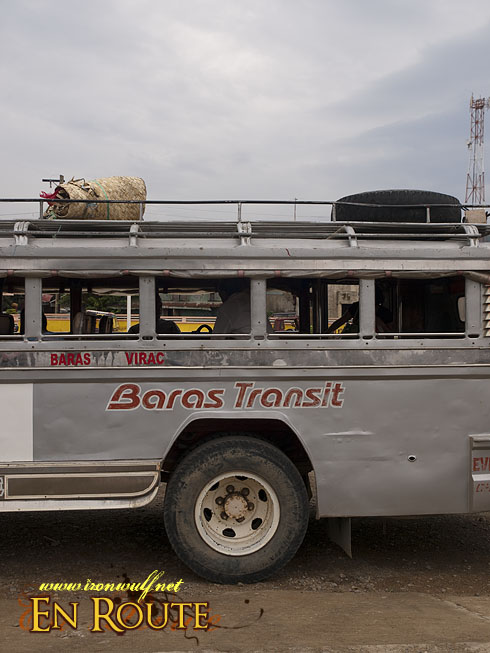 Jeeps bound for Baras and Virac

Aside from Batanes, the other island usually battered by the storms is Catanduanes. Found in the south-eastern part of Luzon, it is usually the first path typhoons go through during the Philippines’ wet seasons. For that reason, the island earned the moniker as the “Land of the Howling Winds.” While it seemed illogical to visit the island during the typhoon season, it didn’t stop me from discovering the island shaped by the storms. 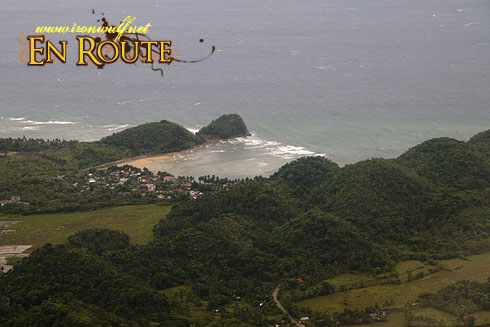 There was a storm brewing at the north eastern side of Luzon at the day of my flight. Heavy rains in Manila led me to worry if my early Cebu Pacific flight to Virac would be canceled. But despite the downpour, operations seem to be normal and boarding went on time. Our ATR plane soared through the clouds with several turbulence here and there. It was supposed to be an hour and 10 minutes flight but it seemed faster than I thought. From my window, as we started to land, I could see the unique topography of Southern Catanduanes. I was amused when I saw Chocolate Hills-like karst formations parading toward the shores. 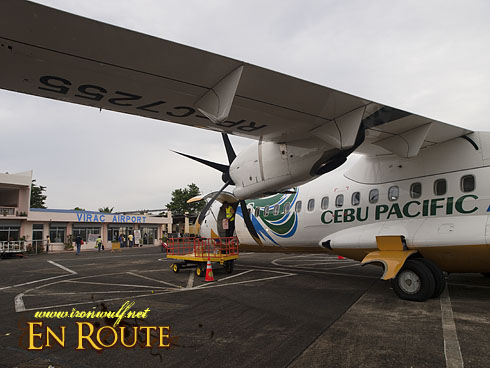 It was a surprise to see the how well made Virac Airport is. Small but very good for a provincial capitol standards. Just outside is a simple eatery perfect for waiting passengers. I waited there for a while sipping on a hot cup of Milo and nibbling on a ham and egg sandwich, trying to extend its life while I await for my friend’s Zest Air flight to come in within an hour. 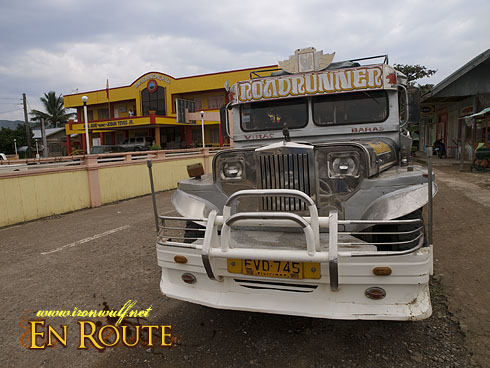 The Zest Air flight was delayed for half an hour but we were still able to catch a jeep to Baras from Virac proper which leaves at 10am. We took a tricycle (the usual transpo) coming from the airport to town for P 40 pesos. It took only a few minutes to get to town and things just fell into place as a large jeep bound for Baras went by. Our tricycle driver hailed the jeep and we immediately got into it. The jeep was huge, clearly designed to take in cargo and drive through rough roads. 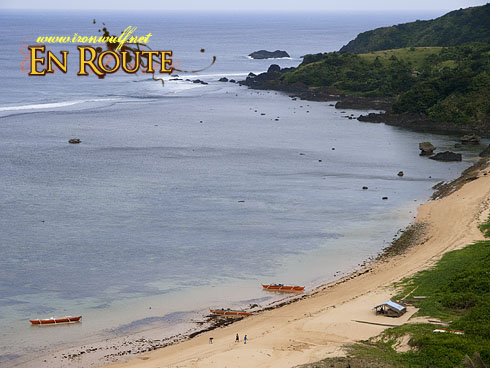 View of Puraran Beach as we descend the road

It took almost an hour coming from the coastal road and up the winding rough paths once we got past the town of Bato. The scenery was equally impressive. The place does remind me a little of Batanes, the rugged landscape and windswept hills but with a unique quality of its own. We alighted in the Municipality of Baras where we had to transfer to a tricycle to head to Puraran Beach. We paid P35 each for the jeep transfer. 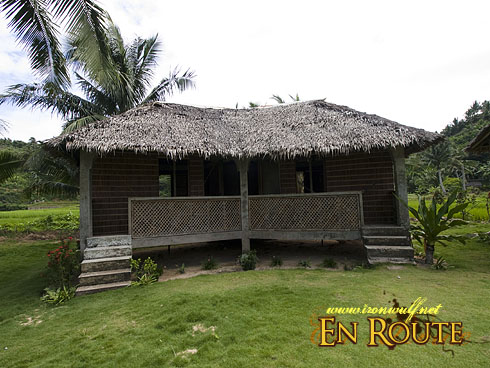 A tricycle offered to take us to Puraran for P150. I had to ask the caretaker of Puraran’s Majestic Resort if it was the right price which she confirmed was the standard fare for a whole tricycle service. P35 for each person if they’ll wait for the tricycle to get full. From Baras terminal it was an alternating rough and cemented road which slopes up and down. It took around 15-20 minutes ride for that 3km distance. So imagine the conditions of the road. Now I’m not surprised why the fare is such. 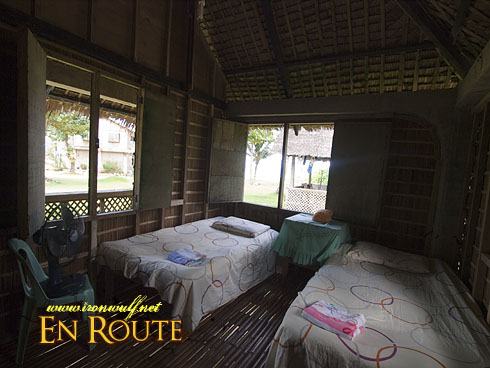 From the main road, the tricycle turned right to a descending winding road. We could see the beach as we go lower and our excitement grew higher. Pardon the cliche but it was a picture perfect view from that high vantage point. And once we got down to the actual beach it was a lot better than I had expected. Karst formations spiking out the seashore, menacingly beautiful surfs, and nicely grained beach makes up the whole Puraran Beach. 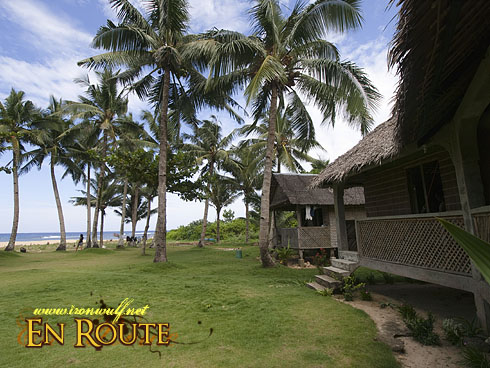 We had reservations at Majestic Beach Resort there. It has a few spartan cottages with clean concrete bathrooms and it’s only a few steps from the beach. Another welcome surprise was that most guests there were foreigners: 3-4 Australian surfers, a German and lone Japanese lady wanting to learn to surf. Our late lunch of Chicken Adobo and Lumpia was so good it could easily contend with some of the best Filipino restaurants in the city. The adobo has a Bicolano/Catanduanes twist of adding Gata (Coconut Milk) and lemon. The trip here from what I’ve seen so far is definitely worth facing the path of the storm head on. 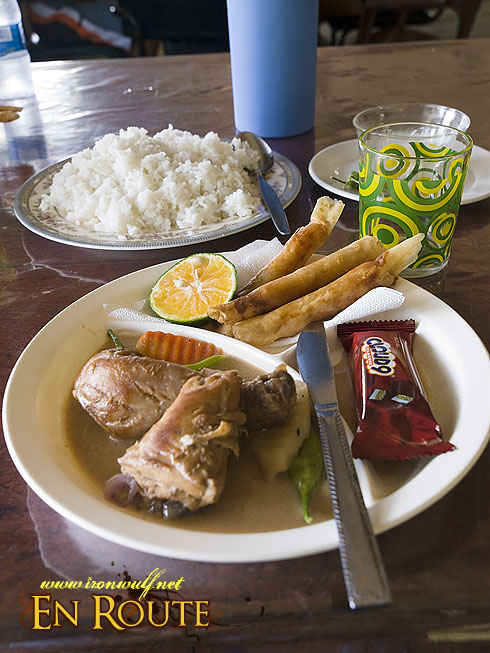 Lunch of Adobo and Lumpia at Puraran Majestic Resort

There are flights from Manila to Virac from Cebu Pacific, Zest Air and PAL Express

A special trip for tricycles to Puraran cost P150, but if you wait for it to fill in it’s P35 for each passenger. Travel time is approximately 20 minutes.

At the time of this writing Globe is the only cellphone signal available at the site.