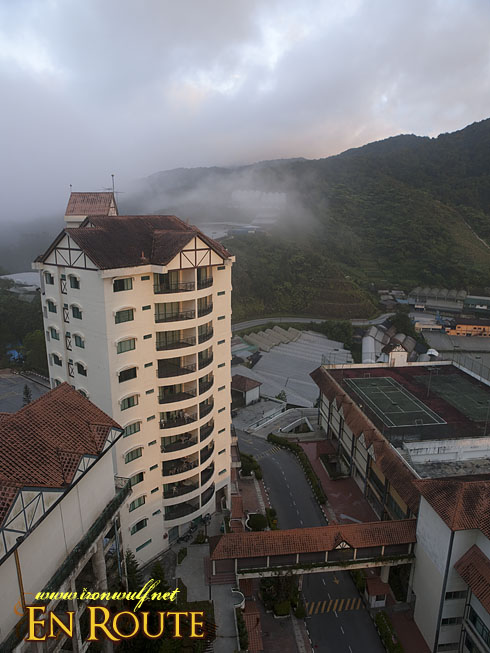 We continued on the road to Pahang after our brief stop at the Batu Caves. The ride to Cameron Highlands from Kuala Lumpur was said to take around 6 hours. Somehow it reminded me of the trip to Baguio. But thank god we were comfortable on the van with each of us having our own rows and could sleep off in between talks and in-ear happy music. But the road to Cameron itself has some interesting stops as all of us, Nina, Martin and I would be visiting for the first time. 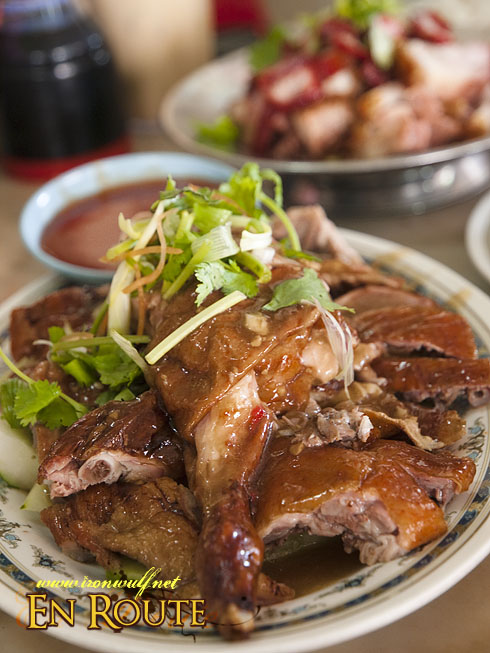 The mouthwatering roast duck at Bidor

By lunch time we stopped by Bidor, a town somewhat half-way between Kuala Lumpur to Cameron Highlands. Aside from being a popular stopover to and from mentioned places, it’s famous for its roast specialties. For lunch we had some roast duck, roast pork, wonton mee and horlicks on the side. They were all good. Marie also let us sample a fruit called waterapple, a larger version of macopa and also the Petay beans with its sour tasting beans. Marie bought a bag of waterapple which we snacked through our ride. 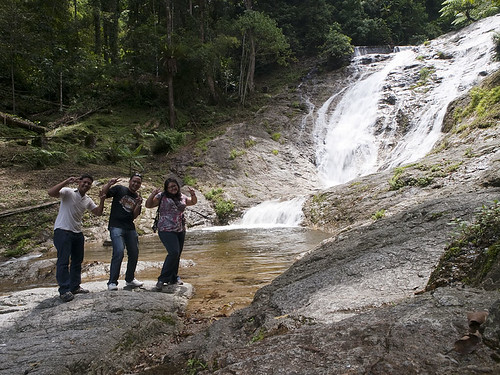 I was half dozed when the van suddenly stopped on the road. Are we there already? No, we have another stop and it’s a waterfall just along the main road. The waterfall is called Lata Iskandar and has been turned into a mini-park for stopovers. We took our time there taking photos. And since Ivan already went home that morning, we missed his company that we started mimicking his signature poses. (Peace Ivan :D) 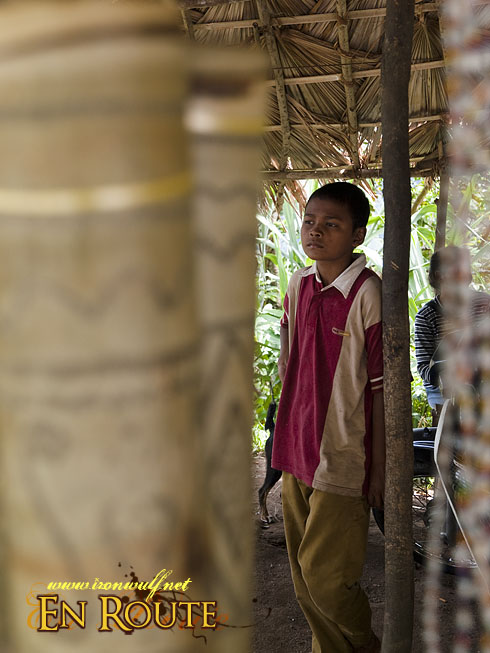 The road this time started to ascend on a zigzag path up the mountains. “We’ll stop by again on the road to meet Michael Jackson” said Marie. But isn’t he dead? And he’s here in Malaysia? Then Marie told us that he’s one of the Orang Asli tribe members who look like MJ in his early years. So we stopped by this hut which is a typical Orang Asli dwelling. 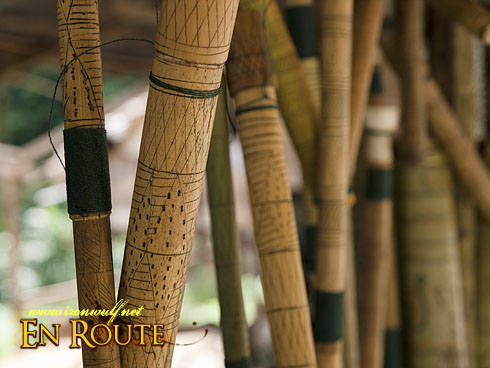 Orang Asli are indigenous people of Malaysia. They have about 18 sub tribes scattered throughout the peninsula of Malaysia. They’re quite creative as seen from the native crafts they were selling at the place. The head tribesman was quite familiar with tourist and was too eager to have photos taken with him on his native garb and also to demonstrate his blow-pipe precision skills. 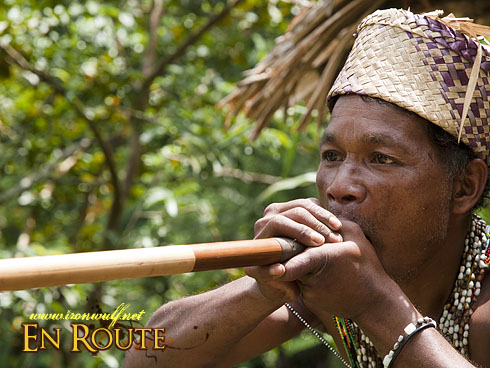 A tribesman demonstrates the Blow-pipe

We moved on again on the road and I was wide awake this time to see the several upland towns there we were passing by before we reach our hotel. We were more than 1000 meters above sea level now and the mountain slopes filled with tea plantations was scenic. We then stopped by this old Tudor house the called The Old Smokehouse. Said to be the oldest structure in Cameron Highlands dating back to 1937. We got a quick tour of this old English house which has become a fancy hotel. 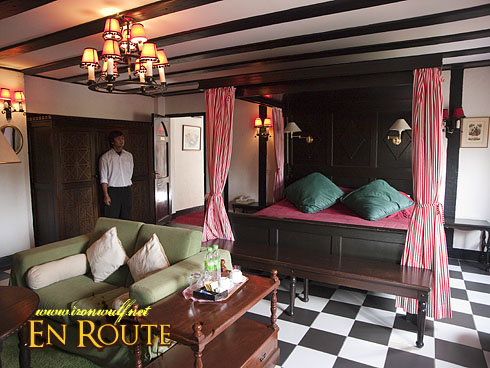 Less than an hour more we finally reached the Equatorial Hotel where we would be staying for the night. It’s a large Tudor styled hotel perched 1600+ meters above sea level. It’s out of the way from nearby towns but has a good location. Unfortunately we didn’t get to have wifi there. Yes they have internet access but it cost an arm and a leg. We took our much deserved rest under new the new bed sheets of our room. 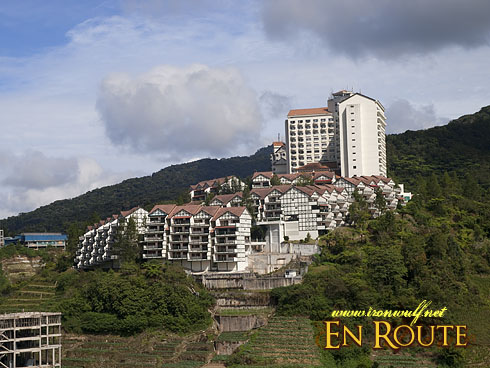 The Equatorial Hotel at Cameron Highlands

For dinner we had to drive back to town which is a 10-15 minutes drive. The town is your typical rural setting, a little cold due to elevation but not much happening in town that night. We had a steamboat for dinner and Marie, being more like a mom of the group helped prepare and cook the meal. It was really a satisfying fill and enough to energize us for next day’s exploration. 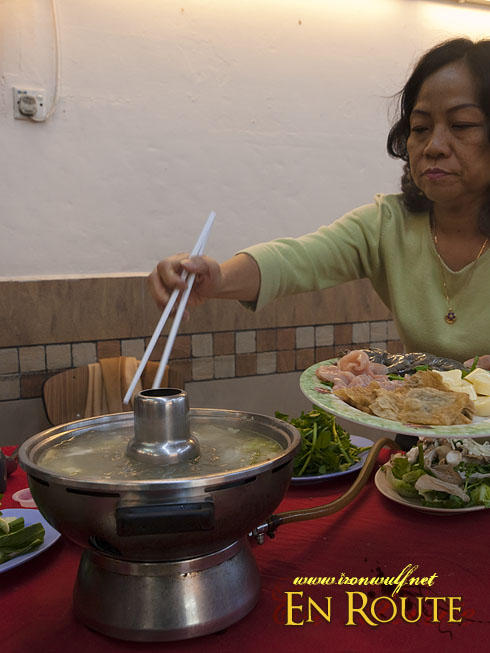 Our guide marie preparing the steamboat