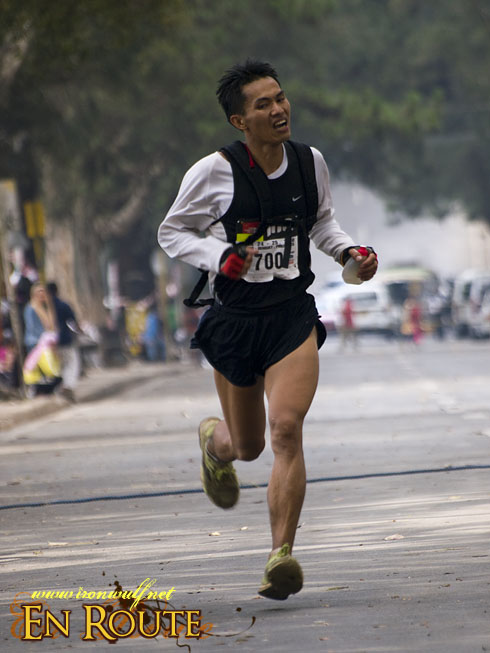 I wasn’t really planning to run. I haven’t really run for years and my last run for 10k was more than 4 years ago as I recall. I didn’t run competitively after that and just do leisurely runs on the nearby track and field near our home. But morning of the 25th April 2010, I found myself running in a pine covered eco-trail in Baguio at Camp John Hay, catching my breath at least 1500m above sea level and racing to finish an 11k race at The North Face 100 Trial Running Marathon in Baguio. It’s my first time to do a trail run which is so much different on running on pavement. It was fun and it was challenging trying to define my limits. 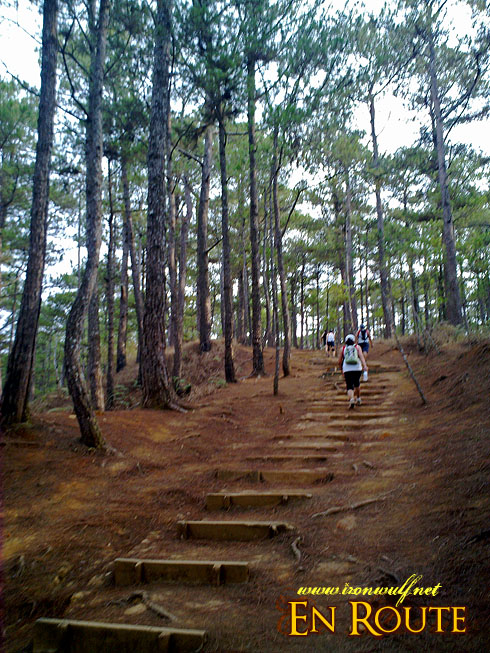 Thanks to one of the media with us backing out of the run (Thanks Lilian) I instead got her number and was able to convince myself to run hours before the race. I wasn’t confident really but my aim was just to finish the race. The 11k has a 3 hour cut-off time and was only hoping to finish the length before cut-off. I think there were at least 30 runners gathered at the foot of the old gates of Camp John Hay fronting Nevada Square before 5:00am. And as soon as the race starts by 6:00am, I hit the start on my Endomondo GPS Tracking system so I could record the status and the trail of my run. 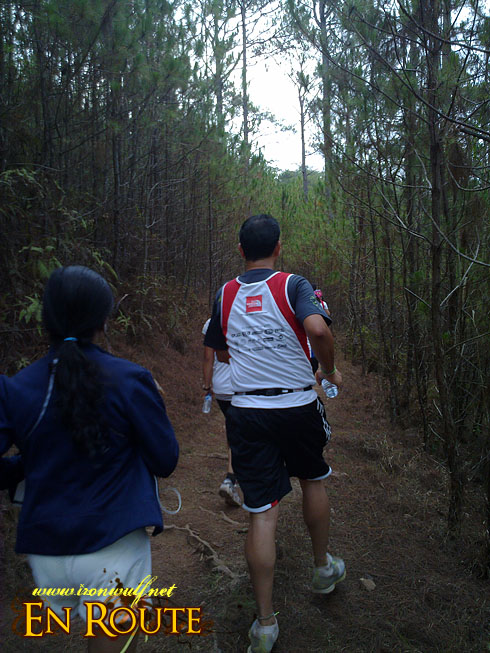 The 11k Trail traffic on the narrow trail

It was a short uphill climb first then a descending forest trail. From then up and down hill trail, passing by paved roads then more up and down hill trail. What I enjoyed on this trail run is the refreshing sight of pine trees and forest as you run a long while trying to dodge or overtake other runners. The cool air definitely helps in easing the exhaustion but the climb and descends still needs careful footwork. It’s like mountain climbing sans the bags and adding the speed. There’s also a difference in technique here. Unlike the pavement, there are narrow trails where I had to wait my turn to overtake. On those occasions, I just walk and try to recover. Stopping a few time to snap some photos through my mobilephone while catching my breath. 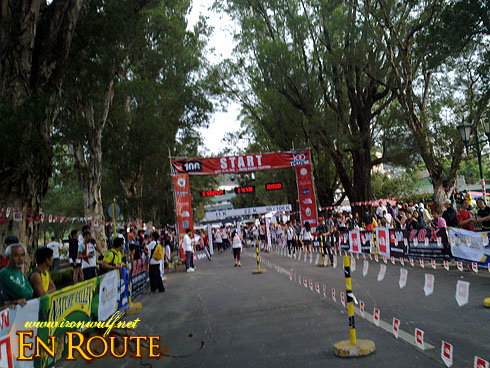 I’m almost there at the finish line

It was past 6km when I did our rounds passing by where we started and on to the pavement this time around to head to the finish line at Burnham Park. It was a lot easier to run on pavement but have to be careful passing by the street. As soon as I saw the finish line I felt relieved. I never thought I would finish this. I looked at the time and it was 1 hour and 27minutes. It was half of my expected time. I was glad and felt accomplished running through the finish line. And for a while I finally felt the runner’s high flowing through my blood again after some time. It was a great experience and would definitely try to do it again given the chance. 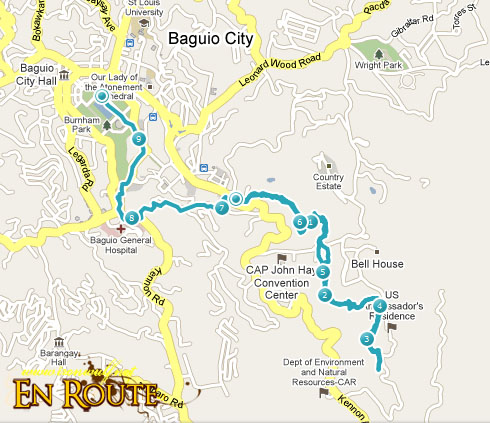 The 11k Trail I ran recorded here via Endomondo

I know this is just a small feat to some major runners out there like the fastest 11k male runner #289 Cesar Castaneto, who finished the trail in 37minutes and 17 seconds or female runner #168 Heidi Sarno who finished in 1hr 6min and 31 seconds. More so the 22k runners who have run also includes the 11k trail like Hernane Sore (#549) who finished twice my distance for only 1hr 30min and 41sec while female Flordeliza Donos (#550) finished her run in 1hr 52min and 13sec. 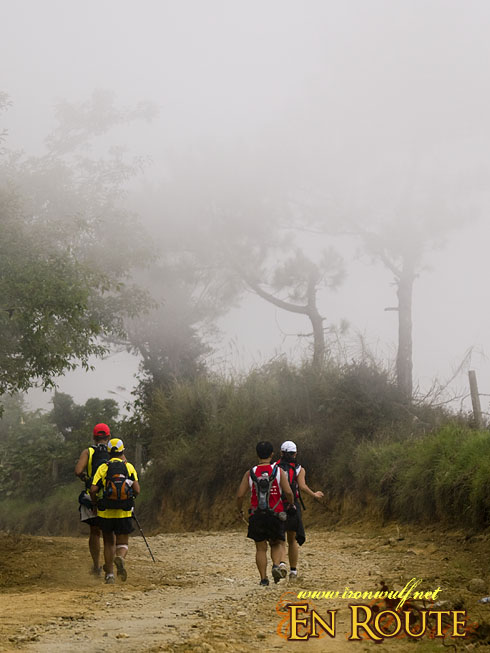 I am more amazed with the 50k and 100k runners who started their runs the day before. We were expecting them to take longer but they surprised us when we saw them flexing every bit of their muscles to reach the finish line. The first 50k runner already passed the finish line after their 3am morning start. Julius Bay-An (#700) got the Gold Medal for Men after running for at least 6hrs and 30mins while Geralden Sialza (#1249) got the 50k Gold Medal for Female after she timed 7hrs 31min and 29 sec. 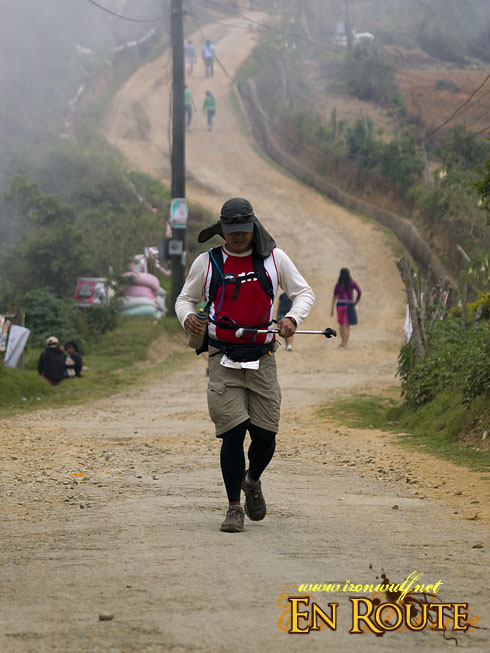 Of course there are runners who are a league of their own like those who participated on the 100k ultra-marathon. Their bodies are just built for this extreme running activity and you can’t help but be amazed by them. Runner #1264 Modesto Madalang thundered his way through the 100k trail towards the finish line with a time of 12hrs 40min and 24sec while female runner #789, Helen Tacling completed the 100k trail in 16hrs 58min and 5sec. They both won P30,000 in cash, P10,000 worth of GCs, and they will be flown to Guam this October to participate the Koko Road Race in which a Filipino Farmer, Pepito Deapera, who also won in the first TNF 100 3 years ago, won first place in Guam. 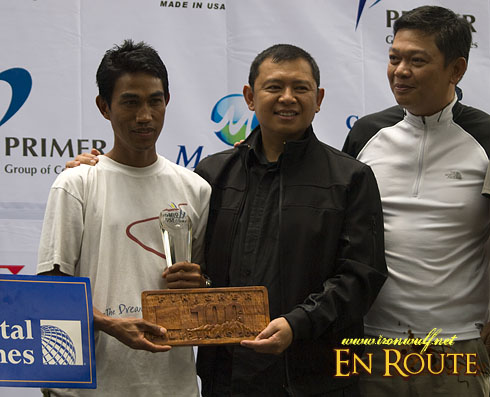 It’s definitely a great time for people who are running at this time. So many guidance and educational programs to help runners get started and outpouring product support to keep runners motivated with the sport. 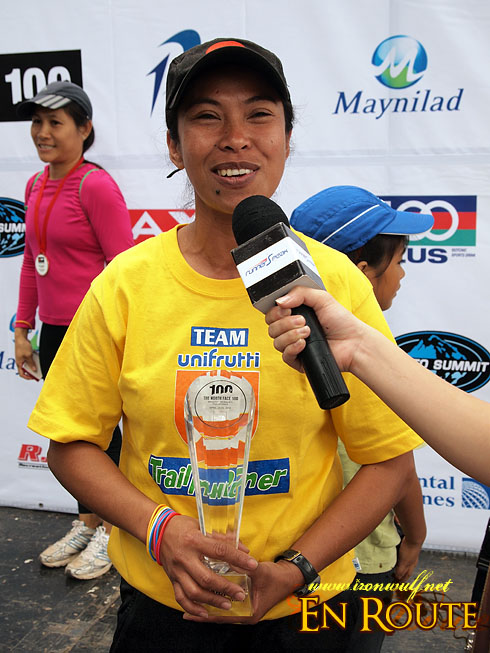