Bahrain Airport Company (BAC), the managing body and operator of Bahrain International Airport (BIA), participated in the 22nd World Routes Development Forum, which was held recently in Chengdu in the Sichuan Province, China.

END_OF_DOCUMENT_TOKEN_TO_BE_REPLACED

It was 3 years ago when I wrote about the last voyage of MV Doulos before it was de-commissioned in 2009 in its last port, Singapore. I was delighted to hear that a new ship is continuing its tradition of spreading knowledge, hope, help and charity around the globe. MV Logos Hope is the fourth ship to be utilised by GBA Ships, a German charitable Christian organization (previously MV Doulos, MV Logos II, MV Logos). It finally found its way to the Philippine shores, visiting Cebu first and now docked at Pier 15 in Manila until March 14, 2012.

END_OF_DOCUMENT_TOKEN_TO_BE_REPLACED

I try not to travel around during the holiday seasons as the vehicular and human traffic is horrendous at this time of the year. But I decided to make an exception on the 17th of December 2011 to witness this year’s Ligligan Parul 2011 or the Giant Lantern Festival in San Fernando, Pampanga. It’s a grand annual lights and music spectacle featuring the Filipino’s traditional Parol (Christmas Lantern) showcased in a gigantic scale. This year, 10 baranggays (villages) take turns to display their sophisticated light design display on their Giant Lanterns in-sync with their choice of music to give us audiences a feast to our senses.

END_OF_DOCUMENT_TOKEN_TO_BE_REPLACED

It’s easy to mistake a city full of high rises and skyscrapers as drab, soulless and primarily made of concrete. However, a visitor who has gone around the fast developing Bonifacio Global City (BGC) is unlikely to make this mistake. BGC features a large number of public art pieces all over the city that helps infuse character and soul in what could have been just another premier business district.

END_OF_DOCUMENT_TOKEN_TO_BE_REPLACED

We’re bringing back Backpack Photography Banaue 101 this year. This workshop is geared towards beginners starting out in photography or people who would like to refresh their photography know-how. As always BP is all about learning the fundamentals and practical tips in photography and applying the knowledge on the field. BP Banaue 101 will be held in March 4-5, 2011 and is limited to 15 participants only. Read further for details.

END_OF_DOCUMENT_TOKEN_TO_BE_REPLACED 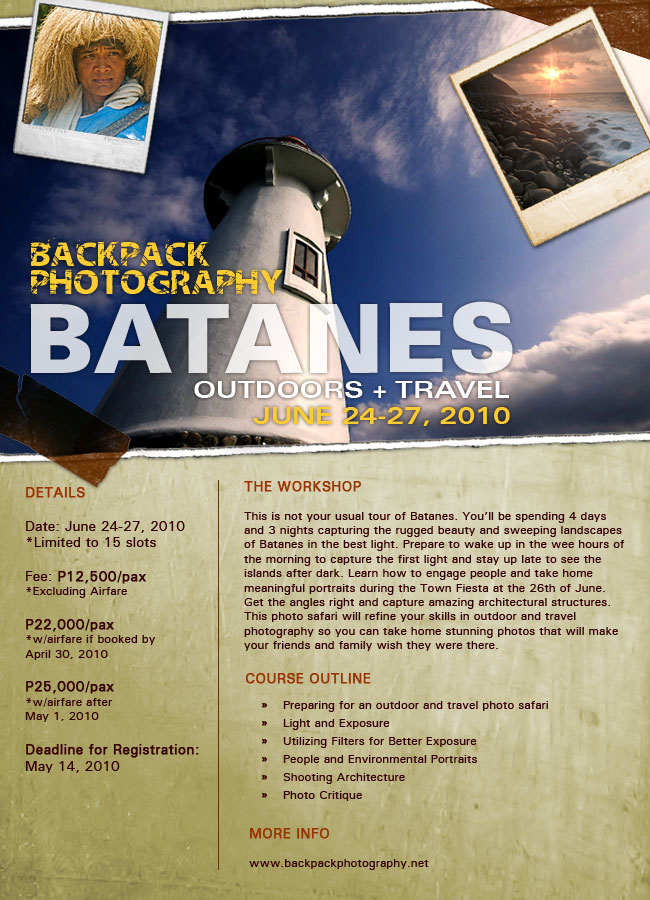 Backpack Photography in Batanes during the Festival Month

We’re rescheduling the Backpack Photography Batanes Outdoor + Travel in the festival month of June. Join us from June 24-27, 2010. Details below:

This is not your usual tour of Batanes. You’ll be spending 4-days and 3-nights capturing the rugged beauty and sweeping landscapes of Batanes in the best light. Prepare to wake up in the wee hours of the morning to capture the first light and stay up late to see the islands after dark. Learn how to engage people and take home meaningful portraits during the Town Fiesta on the 26th of June. Get the angles right and capture amazing architectural structures. This photo safari will refine your skills in outdoors and travel photography so you can take home stunning photos that will make your friends and family wish they were there.

END_OF_DOCUMENT_TOKEN_TO_BE_REPLACED 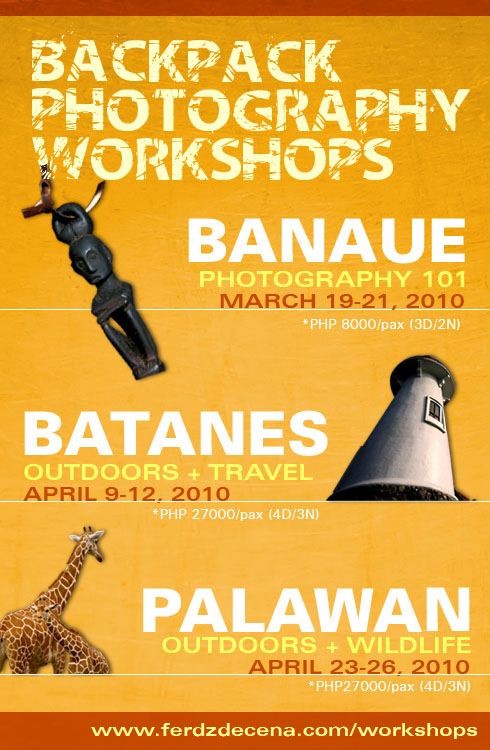 Happy New Year Everyone! Enter 2010! And to start of this year’s post, I’d like to congratulate Andrea for winning the Nat Geo Notebook, Moleskine and Mango Mag pack and an Php 8000 worth slot on the Banaue Workshop. I asked a couple of judges to help me out (since I have a hard time choosing myself) and Andrea’s comment stood out as she’s an avid reader and have utilized the site well on her Batanes trip. And also we’re introducing the Backpack Photography Workshops for the first half of the year. We got exciting destinations like Batanes, Banaue and Coron Palawan. Read on to find out more.