Even after being in El Nido for 3 months, I seldom go island hopping since it is an activity I partook on my first visit taking Tour A and Tour C then. Not to mention it’s not really cheap for a day’s activity once you are living in the area. It took a friend’s visit from Singapore for me to take another tour of Bacuit Bay, this time with El Nido Tour B which my friend and I haven’t done yet. Being back there again in the midst of the many islands of Bacuit Bay renewed my sense of wonder of El Nido. It’s different world when one is out on the sea.

END_OF_DOCUMENT_TOKEN_TO_BE_REPLACED

Oh yeah I love snorkelling. I simply can’t get enough of the underwater world even on shallow depths. I would take diving but it is a much more expensive a hobby and I never got a chance to get certified that’s why I’ll settle with snorkelling for now. And if you ask me now where was the best snorkelling I had? I would definitely say Perhentian Islands, in Malaysia since the snorkelling tour was so organised and I was surprised to see the abundant marine life in one afternoon.

END_OF_DOCUMENT_TOKEN_TO_BE_REPLACED

The Enchanted River in Hinatuan was one of the places I was looking forward to in our Surigao del Sur trip. First seen on the famous Travel/Docu show “Born to be Wild”, I was immediately curios to see it for myself. Mid-day after taking lunch coming from Tinuy-an Falls, we proceeded to Hinatuan which is roughly an hour away from Bislig. Finding it gave a sort of mix feelings. Only to discover it’s not how I envisioned it seen from the famed TV show.

END_OF_DOCUMENT_TOKEN_TO_BE_REPLACED

I’ve been looking at the stark gray sky repeatedly while hoping that it would clear up or much less, let the rains abate. It’s been at least an hour since our original call time. We’ve eaten our packed breakfast and spent time idle with Sun City‘s speedy internet connection. We could have slept over these wasted time but we were all raring to go to Palaui Island. It will be my first time to set foot on this island at the northeast tip of mainland Luzon and I won’t let this rain dampen my excitement.

END_OF_DOCUMENT_TOKEN_TO_BE_REPLACED

Our 2nd day in Puerto Princesa started when a Van from Pasyar Palawan fetched us about 8am at Microtel Hotel. The only seats available in the van are for the four of us, I guess the P1100 per pax fee for the Honda Bay Island Hopping isn’t exclusive to us this time. Anyways, the fee covers a day of island hopping including our lunch so I guess I don’t mind sharing.

END_OF_DOCUMENT_TOKEN_TO_BE_REPLACED 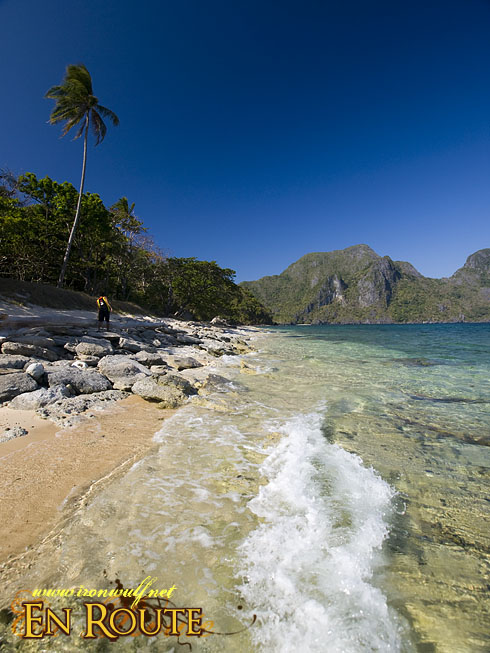 The beach at Helicopter Island

“We can’t make it to Snake Island”, our boatman who doubles as our guide, Charlie informed us. It was already late mid afternoon and Snake Island is far down south of Bacuit Bay. We were also told that we needed to refill our fuel soon lest we got stuck in the middle of the bay. We headed to an island they called Helicopter Island, said to be named after its shape. But it looks a lot more like a whale to me.

END_OF_DOCUMENT_TOKEN_TO_BE_REPLACED 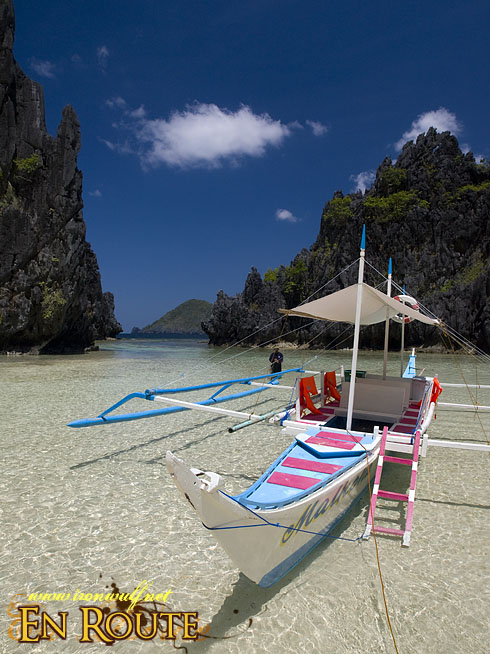 Our boat at the Hidden Beach in Matinloc

Making our way back at the central channel of Taiputan-Matinloc Islands we docked on a beach where Matinloc Shrine is located. Shielded by walls of limestone, It’s a charming place that I felt it’s like a small piece of Greece with its architecture. There’s also a large platform facing the beach on the opposite island. Standing there gave us a surreal panorama of the aquamarine waters and limestone cliffs in every direction or angle.