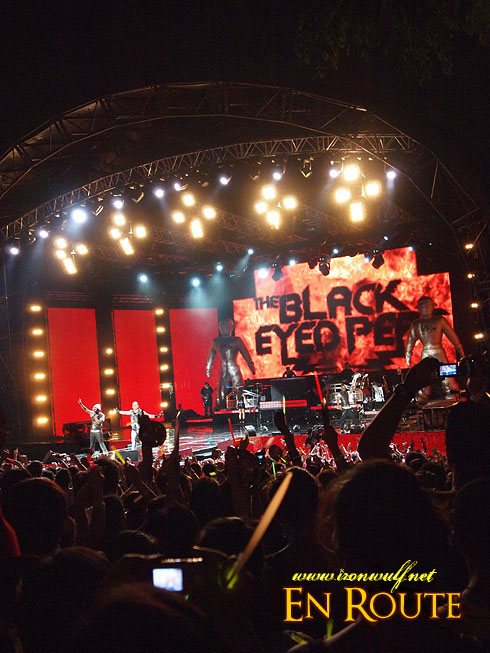 Department of Tourism Philippines and MTV Asia has a joint project soon to be launched first thing in October. We were fortunate enough to get an exclusive preview of their collaboration with renowned Filipino-American Apl.de.ap (Allan Pineda Lindo) of Black Eyed Peas called “Take U to the Philippines”

END_OF_DOCUMENT_TOKEN_TO_BE_REPLACED

Selected CDs from my collection

Got tagged twice by Senor Enrique and Iskoo Hmmm…checking my MP3 player (which I haven’t updated for a while). I’ve got seven faves on my list…

The country may be in a “State of Emergency” but the music and the arts shall never stop expressing their sentiments on what is heppening right now in our country. The recent Arts and Music Festival for the 2nd day of the event were quite vocal on their perspective on what’s happening. In truth the media right now is under a leash, one wrong move and they could easiy be overtaken. It seems every week, a lot has been happening in our country, from the Ultra Stampede the first week, then there’s the Lanslide in Leyte, and now this State of Emergency. I hope PGMA is doing the right thing here and help more in the country’s situation.

Longtime college buddy, Fully, does the vocals for the Band, NozeGrind

A tribute to the Eraserheads

I have been listening to the album “Ultraelectromagneticjam” for more than two weeks now and must say this has been a mixed bag for me. Honestly I’ve never really been a huge fan of E-heads, but I did enjoy most of their music, especially it was also a start of my college years back then and quite memorable. Even had a “CutterPillow” cassete back then. But hearing these new versions of their songs was a mixed of refreshment and “What the hell did they do?”

So what I did is to rip my CD and just chose tracks that’s worthy filling the limited space of my Nextbase MP3 player. So here are the tracks I chose:

Spolarium is one of the lesser known songs from Eheads but I remember this song reaching number one then in NU 107’s midnight countdown. It’s one of my favourite songs from the band and Imago didn’t disappoint me. Their version of Spolarium is just so addicting that I can’t help playing it again and again. Sugarfree is just perfect for Tikman (Remeber that “Burger machine” commercial), as Ebe’s voice is somehow similar in tone as Ely. Then there’s the souped up version of Superproxy from FancisM and the Hardware Syndrome, with ELy Buendia doing the rapping chores this time around. Also probably the hardest rocking song in the album. Radioactive Sago covered another lesser known song, Alcohol, which is just perfect for them and very original.

END_OF_DOCUMENT_TOKEN_TO_BE_REPLACED

Hey I’m glad the band scene is alive and kicking but there have been a lot of talks on particular songs being rip-offs. Kinda disappointing. Are these musicians loosing a lot of their creative juices?

First of this lot is Cueshe’s “Stay” which was said to be a rip-off of Silverchair’s “The Greatest View”. At first listen, it may not be that obvious but listening closely to that chorus of both songs, you’ll see the similarity. And also I may add, the intro of Cueshe’s “Stay” is very similar to Simple Plan’s “Perfect”.

Now the 2nd one is really a big disappointment. First time I heard Session Road’s “Leaving You”, I thought it was a great song and has amazing composition. But after hearing Superdrag’s “Garmonbozia”, I can’t help but notice the similarity on the guitar riffs and chorus tune.

Lastly, is a blatant rip-off in my opinion. Orange and Lemon’s melody and arrangement in Pinoy Big Brother’s theme song “Pinoy Ako” is a total rip-off of The Care’s “Chandelier”. You don’t have to listen to it closely, its so obvious! And still Orange and Lemons are arguing that it’s a totally different song. How ironic that Joseph Manalo’s lyrics were coined into this song. Is this how “Pinoy” are, mere copiers?

Now many may argue that these songs were inspired by those original and the lyrics are completely different. But where is the line that seperates “Inspiration” from “Copies”? You guys tell me, what do you think?

In the overly saturated world of bands in the local music scene lately, it’s really hard to find one who can offer something new and stay there for a while without being dragged into the conventional sound of pop/rock and endless adaptations into the acoustic side of song (I’m pointing at you MYMP and Nina!). Where Kitchie Nadal, Barbie Almadis, Mishka Adams, Mojofly, Imago and Session Road may have defined the female rock genre with their own style, we can’t deny there are a lot of wannabes who try to follow their path and thus ending up sounding the same.

And good thing for all of us, guitar goddess, Cynthia Alexander, finally released her third album “Comet’s Tail“, after 5 years, following her successful venture into independent release of Rippingyarns. I’ve always been a fan of her ethnic-rock fusioned style, dreamy sound and poetic lyrics that have become her own unique trademarked style. Her new album is a refreshing release from all the pop/rock sounds bombarding our airwaves.

“Comet’s Tail” seems to follow the same path as Rippingyarns but on a darker and somber tone that seems to speak of death, life, moving on and in the end, assurance. This may have been a reflection of Cynthia’s state after the death of her father. Still, the album is not all gloomy, there are upbeat songs that lighten up the mood and songs that set you in the mood of serenity.

Musically, this may be Cynthia’s most dynamic album to date. I’m just in awe as I listen to the outstanding production and instrumentation done here. Each song showcases her versatility as an artist.

END_OF_DOCUMENT_TOKEN_TO_BE_REPLACED

J.D. is the new frontman for INXS. Didn’t expect this coming but from his last few performance, especially with INXS it definitely hit off. He’s got this Michael Hutchence-appeal when he performs. For Marty, who is a favorite of mine really, is better of doing his own stuff. I like his song “Trees” and I think would hit off the charts. As for Mig who also thanked us here in the Philippines (awww) is a different breed of his own. Mig is good, but he’s to glam to be an INXS. Like I said before, his song choice may be his ruin, and it did. INXS is looking for a frontman who can ooze sexiness from their songs much like Hutchence did and J.D.’s got it.

Well gotta sleep now, in a few hours, will be flying off out of the country for a much deserved vacation. Will blog back in a week. Keep safe folks!