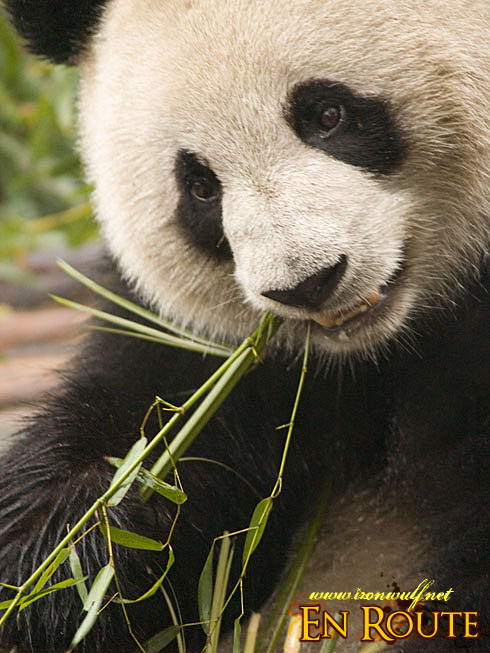 Since the 2008 Beijing Olympics just a few days ahead, I thought I feature one of China’s beloved National Treasure, the Pandas. Those droopy blotched-eyes and thick white fur are just so adorable that a kid would easily mistake them for a living stuffed toy. Pandas have been considered as a “living fossil” since they have walked among the saber-toothed cats in the Pleistocene period and have miraculously survived the changing earth conditions until this time. They have been a symbol of conservation that’s why it’s no wonder the WWF (World Wildlife Fund) used the Panda as their main logo for their cause. In China Chengdu, we were lucky enough to get up close and personal with these creatures at the largest Giant Panda Eco-Park in the World – the Panda Adventure. 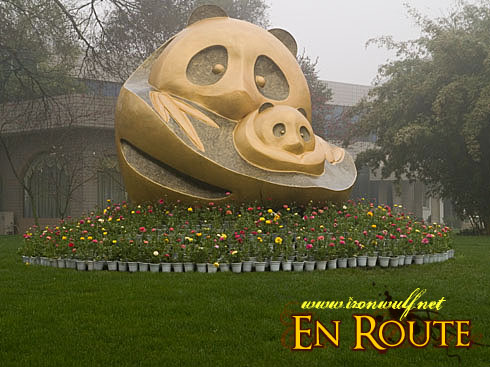 Walking along the Panda Adventure Park

The Panda Adventure is also known as the Chengdu Research Base of Giant Panda Breeding. We never really planned to go there but due to an unexpected detour I told before, we had to change some plans. And I’m quite thankful that we were able to visit the place and see them live. They are more adorable seeing them in person that I almost exhausted a gig of my memory card just taking pictures of them. 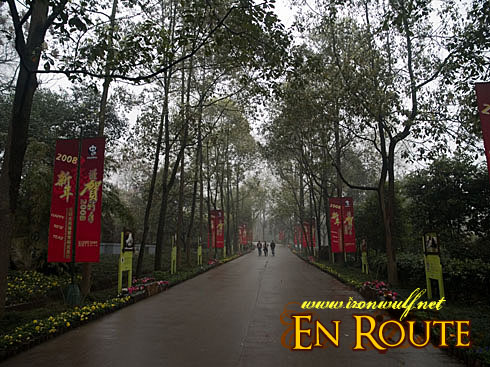 The Chengdu Research Base of Giant Panda Breeding is found on the northern suburbs of Chengdu, less than a half hour drive by Taxi from the city center, tail end of Panda Road. The area spans a large 105-hectares and has garnered wide accolades from conservation societies and groups. The entrance fee to the park is only 30 RMB. 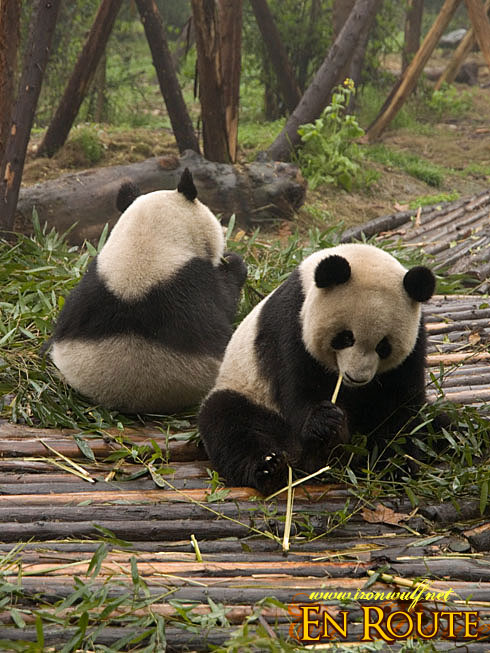 Panda Back to back

There is a map at the reception area which also houses the first Panda Museum in the World. Do take time to look around the life-size diorama displays on the Natural History of the Pandas. It’s both educational and entertaining. Souvenirs can also be bought there. I remember buying a few ref magnets and a shirt as well. 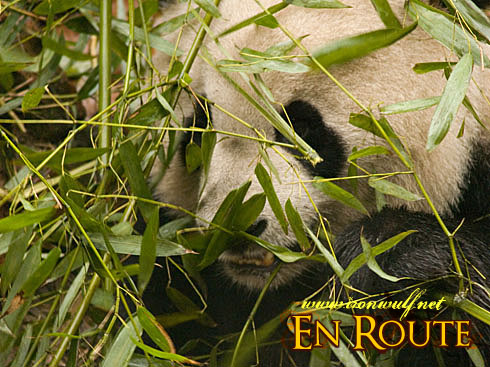 The park is pretty huge but navigating around is pretty easy. If you don’t want to walk there’s a ride available as well. The temperature there is pretty cool. There are lots of flora that is naturally growing in the area as well. There are around 400 known species of plants and other faunas aside from the giant pandas like the swans and the egrets. 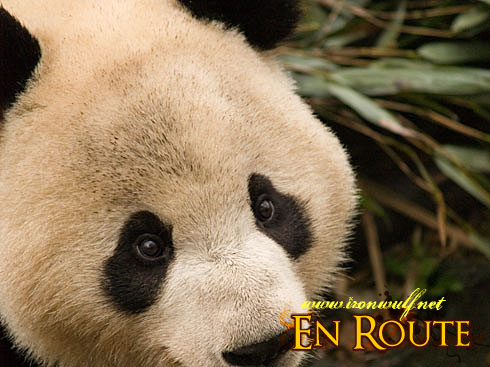 There area a number of Panda Enclosures scattered throughout the park. The first one we stumbled upon was the Adult Panda Enclosure. There were 3 grown pandas there. It was morning and their snack time so we were lucky to catch them really active. It was real fun looking at them. How I envy their life of sleeping, eating playing, rolling and just being their cutesy self. Not being a predatory animal since they feed on plants, it’s a real wonder how they survived all this times. 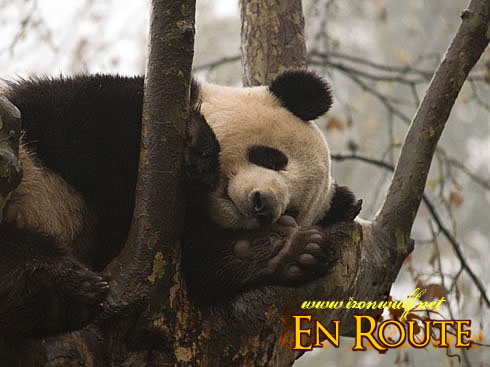 Pandas are naturally solitary animals. They enjoy spending days on long naps. When awake, they play around with other Pandas or munch on some bamboos. I was really amused seeing them eat. They don’t just eat the bamboos as is, they peel of the skins first and eat only what’s inside. 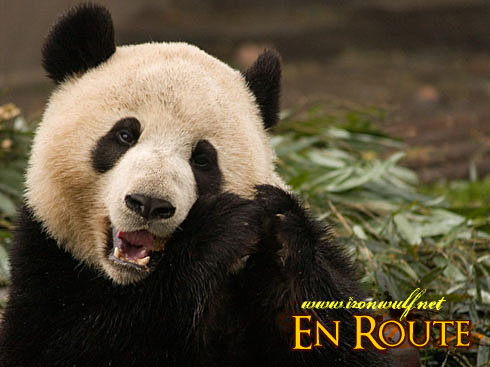 And boy do they really love to sleep. There was this other enclosure when we found a couple of Pandas snoozing on top of a tree. A researcher/ care taker came by to give him a biscuit which has his regular vitamins and medications. I forgot the name of the Panda but the caretaker was calling up to him. The Panda could hear this but simply covered his face as if it doesn’t want to be disturbed. Real Funny. Eventually when he saw the other Panda eating below he went down and joined in on the snacks. 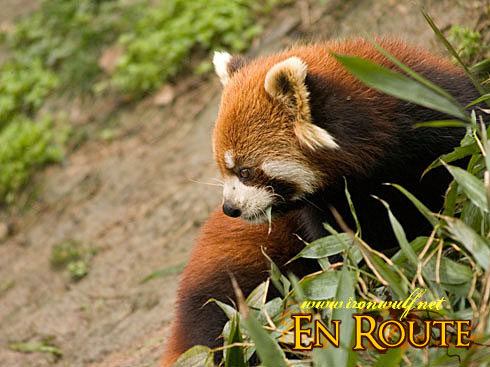 Another interesting animal I got to see on a couple of enclosures are the Red Pandas, also known as the Lesser Panda or the other popular web browser the Firefox. They are not as big as common Giant Pandas but really cute as well. These agile little animals are quicker on their feet and looks more like an overgrown cat. They are mostly herbivores as well. 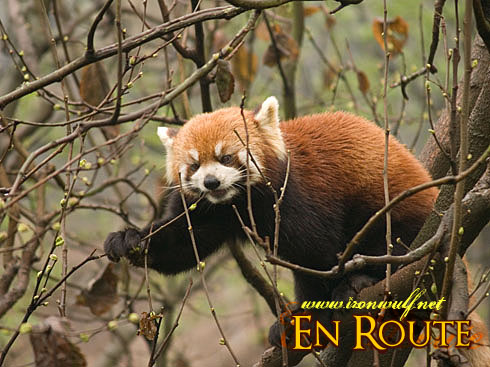 I really enjoyed seeing these creatures in life instead of just looking at them in pictures or watching them on National Geographic. They are adorable creatures and with the destruction of some of the forests in the mountains, I’m glad there are research and breeding centers like the Panda Adventure which helps conserve these animals and also serves as a sanctuary for them. I was hoping to take one of them as a pet, but I think that’s not likely to happen.