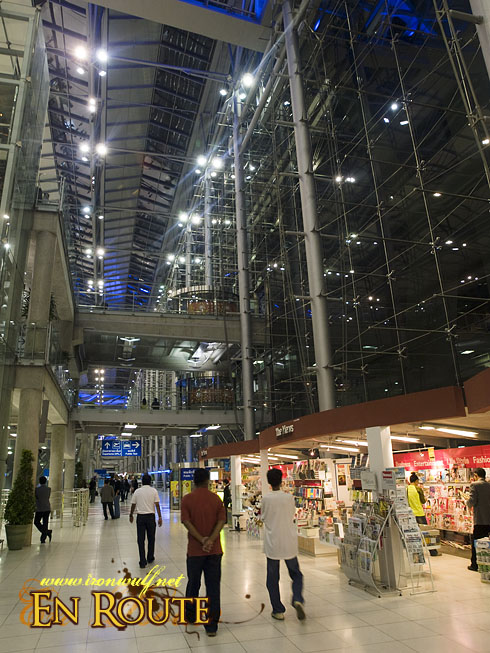 Laos has been under my radar for quite a while as I continue my quest to visit some of the UNESCO heritage sites in Asia. So it’s just a matter of time until I finally get to step on this land, popularly known for its “Laid back Lao Life”. Originally I had planned on visiting sights both on Thailand and Laos since it’s so close together. Coming in from Bangkok up to Sukhothai then Chang Mai then Chang Rai. Border crossing to Huay Xai taking the Slow Boat there to Luang Prabang, Laos. That’s the usual route going there, but after thorough planning there is just so much to see in Laos that I decided to drop Thailand altogether and focus on Laos itself. Thailand is just a flight away from Manila but Laos is a different story so I decided to take a different route. 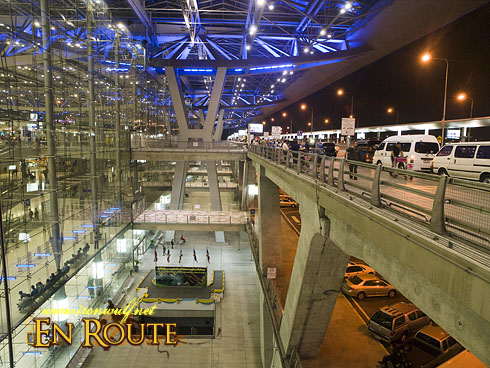 Laos currently has two UNESCO World Heritage Sites, the most popular is the temple-dotted town of Luang Prabang up the northern province and the less familiar one are the Khmer Ruins of Wat Phu in Champasak province down south so I have to plan a way to visit both sights which are both worlds apart. I reworked my Itinerary and decided then to start from the south in Pakse in Champasak Province going up north to Vientiane then finally going to Luang Prabang. I have a US$400 dollar budget (But I brought at least $500 for contingency) for this 14 day trip around Laos. So with lots of excitement, I head of to Bangkok on my own as my jump-off point to Laos. 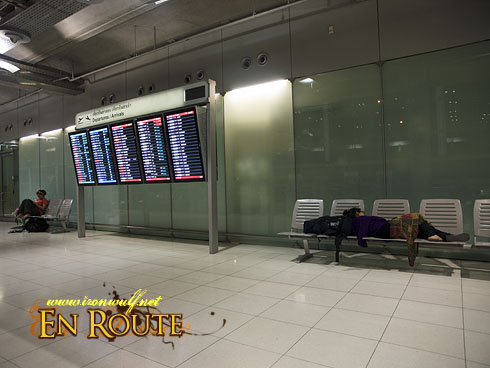 I had an evening flight from Manila so I arrived in Bangkok’s Suvarnabhumi Airport around 11:30pm Thailand Time (+0700). Having another earlier flight to Ubon Ratchathani in Isaan Thailand Province I decided to spend the night at the airport. For one, it’s more practical than heading out to the city and staying there for only a few hours. Second it would save cost. Suvarnabhumi Airport operates 24 hours so I looked around for a place to sleep after changing my $20 to Thai Baht so I could have a few money to spend in transit. Surprisingly, I found a lot of passengers sleeping on both end wings of the airport, particularly on the 2nd floor where the restaurants are located. Some even on the middle section. After having a quick snack, I found myself one metal bench, secured my belongings with carabine attached to both my bags and stretched out to catch some Zs. It was colder than I expected that I had to bring out my sarong to use as blanket. I was able to snatch some sleep until 5 am when I freshened up at the nearest restroom. 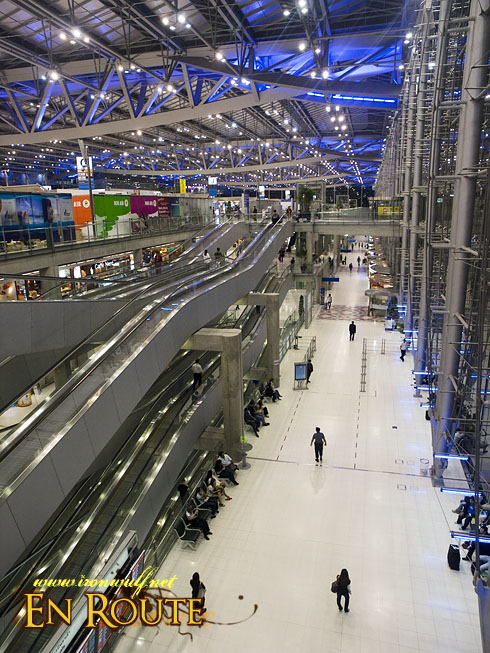 Checkin counters opened early. Different airports have different policies. If in the Philippines I had to check-in my tripod, here, they insist that I take it in with me as a hand carry. I guess they’re not concerned if I turn this tripod into a weapon. Grabbed a breakfast and boarded for the 8am flight to Ubon Ratchathani. It was an easy 1 hour flight so I arrived there a little past 9am. Hired a cab to the Bus Station for 150 Baht which seems to be the standard fare there. It was a little farther than I expected and in between, my driver, even with the language barrier attempted to ask if I want his taxi to take him straight to Chong Mek. I declined knowing how much it would cost. I wasn’t able to catch the International VIP Bus going to Laos which left around 9:30am, the next one is pretty far apart at 3:30pm in the afternoon. Another taxi driver there was convincing me to take a Taxi to the border for 1000 baht. Simply outrageous compared to the 200 baht by bus. Then I remembered my Plan B. 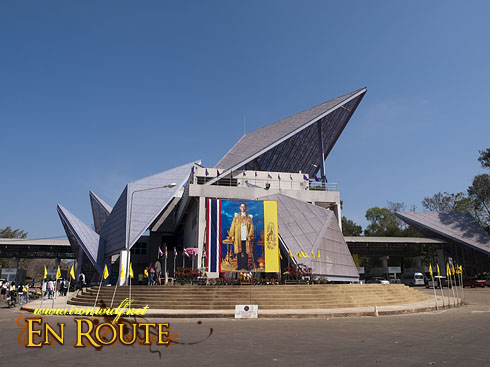 The Plan B was to have connecting rides going to the Chong Mek Thai border. I took a Phibun Mangsahan bus from there. It was almost a 2 hours journey with almost a 30 minutes stopover in between. It was an interesting bus with a number of ceiling fans and some local Thai sitcom and MTVs being played. Are Thais really a bit gruesome (and violent) on some of their humors? The bus fare was only 35 Baht. When we reached Phibun, we were fortunate a Jumbo was passing by heading to Chong Mek. Jumbos are essentially pick-up trucks, with placed benches and and roofed. It took an hour for 40 Baht before we reached the Jumbo terminal. I had a quick noodle lunch there, after which a motorcycle took me for a quick ride up to the Thai immigration building with an interesting roof architecture. Reminds me of box of Nacho chips. After stamping my passport I went on the other side to find the Lao Immigrations. 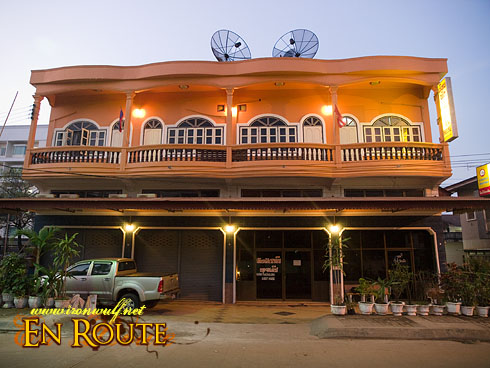 The Lao Immigration was only a single story structure, much like a school building. I easily filled up their forms and paid 100 Baht as entrance fee. From there I looked for a transportation and found a motorcycle who could take me to Pakse, the Capital of Champasak Province for $12. I told him to cut it down to $10 but he refused first then later accepted it when I was walking away. I had no Lao Kip then so I had to pay in dollars. I thought the $10 is still a bit steep but thinking about it I don’t have to hire another tuk-tuk if a sawngthaew would take me to the terminal. The motorcycle ride took almost an hour, passing by vast dessert like planes dominated by warm earth hues. Mountain gradients far off the horizon while cows occasionally slow us down the road. We passed by the long bridge to the city only to find out my driver doesn’t really know where the Inn I mentioned was. We were going around circle several times when I told him to just drop me off the guest house he knows at the center of the city. 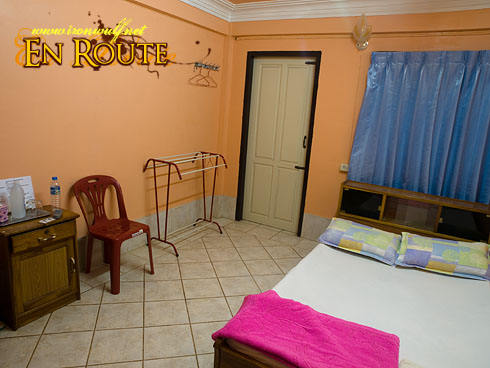 I checked out Lankham hotel first which is by the main road but decided not to get their 100,000 Kip room. I went into the inner road and found Narin Thachalen Hotel which is on one of my list of accommodations. It’s on an inner street which is quieter, room was big with en suite bathroom all for 80,000 Kip. I rested a bit and arranged my belongings. I lay on the bed for a bit and told myself “I’m finally in Laos”