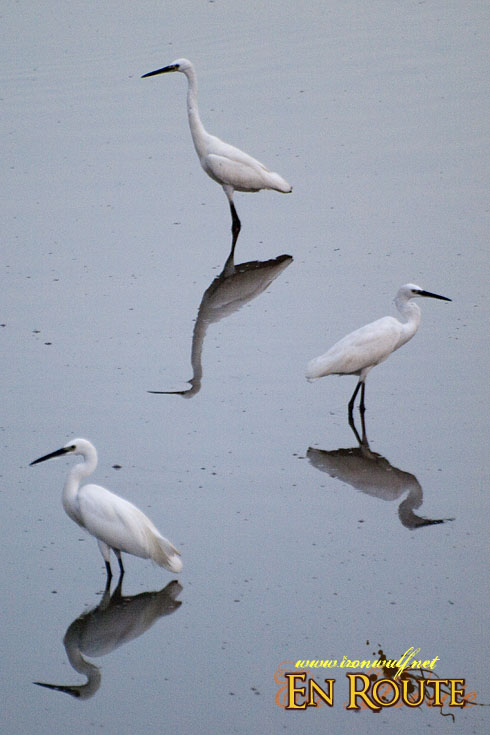 I always thought that the small island country of Singapore has developed into a full-blown modern city in all corners. But beyond its neatly paved road and architectural playground, I was still able to find some spots where people can enjoy the beauty of nature. While I was looking into the Heritage Parks of the ASEAN member countries, I discovered that Singapore has one nature park listed named Sungei Buloh. So when I was there I made sure to visit the place. 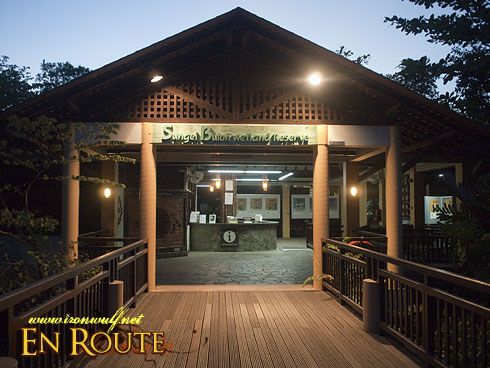 What I like most about Singapore is the convenience of its transport system. Even if I haven’t gone there, it was easy to find my way around. We took the MRT going to Kranji Station. From there, we took the SMRT Bus number 925 and alighted at the entrance of Sungei Buloh Wetland Reserve Park. 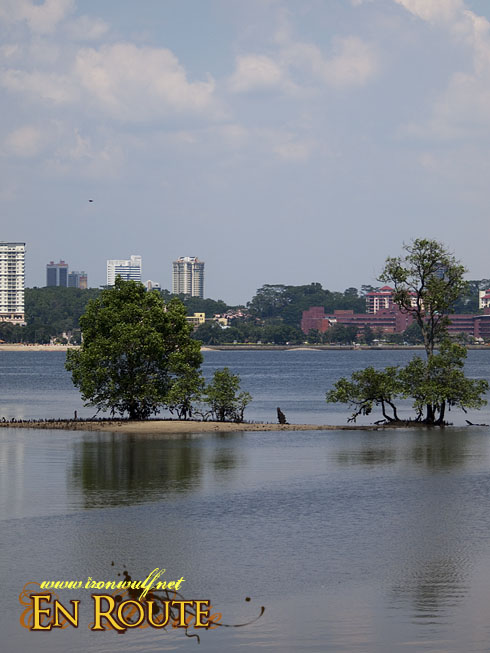 Even before we reached the Visitor Center, we had a first encounter with wild life when a 3-foot monitor lizard crossed our paths. It stayed there for a few seconds eyeing us until it went back to the bushes. The Nature Reserve Park is regularly free but on weekends like the time we were there, we had to pay a minimal fee of SG$ 1 for the entrance. We got a map of the reserve at the center and plotted our way through. 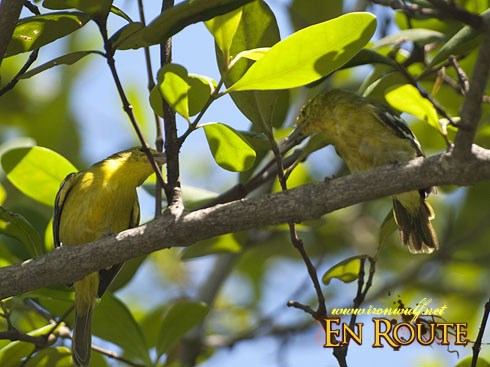 There are actually 4 Walking Routes within the park varying in length and features. The Mangrove Boardwalk adjoining the Visitor Center is the easiest and shortest. It has an elevated footpath snaking through the mangrove forest to keep you dry. The length of the boardwalk is 500m and can be finished in at least 30 minutes. 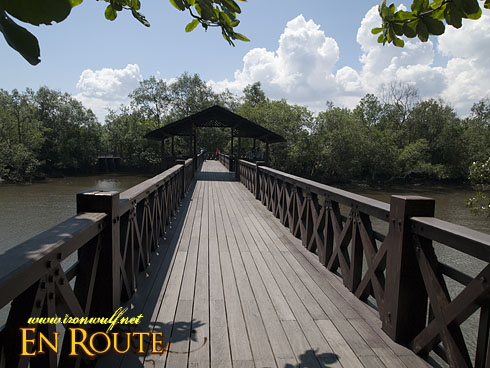 Even if it was a short walk, make sure to apply mosquito or insect repellant as there were some bugs annoyingly flying around the area. The boardwalk was fairly pleasant with a few gazebo stations for resting and viewing. I also noticed that at this point, Mobile Phone signals interchange from Singapore and Malaysia providers since we were so close to this neighbor country we could see them across the sea. We spotted several Olive-backed Sunbirds here and a few squirrels during the walk. 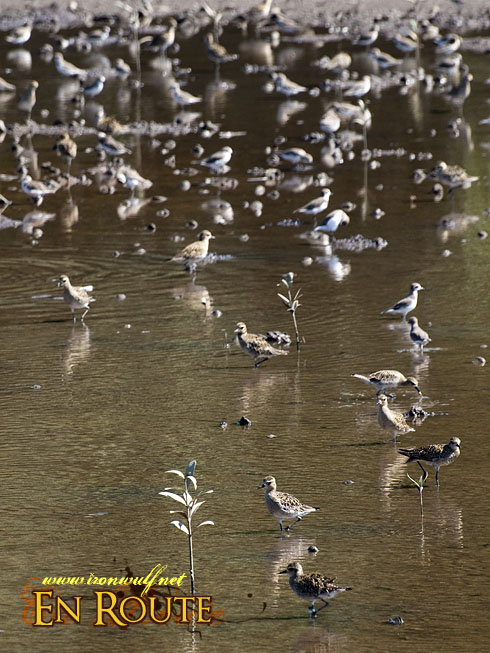 A bunch of Waders and Shorebirds at Route 1

We then crossed the Main Bridge of Sungei Buloh Besar to enter Route 1, which is a 3km walk that could take an hour or two. There are several “Hide” stations along the path where you could actually hide from sight and observe the frolicking birds in the area. But to take photographs here you really have to be well equipped. I already have a 600mm equivalent focal length lens here but I still struggled to get a good close up of them. There were actually serious birders here we came across with equipped bazooka like lenses and large strobes. 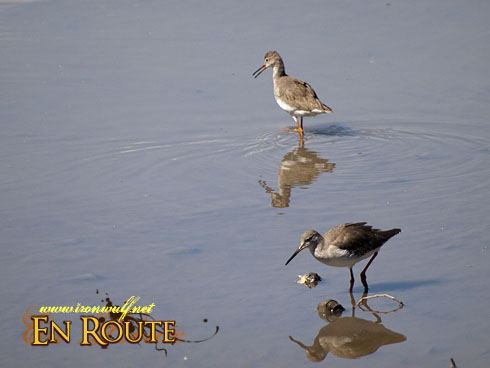 A couple of Sandpipers wading through the shore

There were many waders and shorebirds like plovers and sandpipers at the mudflats areas there in Route 1 with occasional egrets flying by. We climbed up the Aerie and had a nice 360 degrees of the wetlands. When we went down and continued to Route 2 of the wetlands going the northern path to the Sungei Buloh Kechil where the river opens to the sea and we get a clear view of Malaysia across. 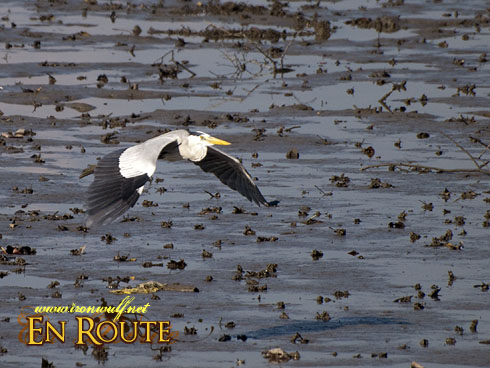 Route 2 is approximately 5km and takes about 2-3 hours to finish with Route 1. There were a lot of Gray and Purple Herons at the shoreline but they were too far for my lens range to reach and I was just trying to catch them in flight. Aside from the herons, which is the largest bird in Singapore,, there were crocodiles in the vicinity as well. On our way back we came across a prawn pond but nothing really special by the looks so we headed to Route 3. 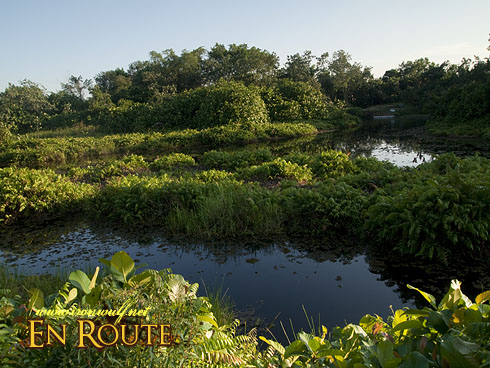 The Freshwater Pond area at Route 3

Route 3 stretches to 7 km in total and could take 4-5 hours in all from the Visitor Center. It wasn’t really the peak season for migratory birds when we got there so there were only a few and most of them are hiding in the shade that afternoon. We didn’t get to see much from the Freshwater Ponds except for some interesting mud creepers hopping through the trees and branches and a hide station already crawling with spider webs and a bunch of flies, so we headed back. 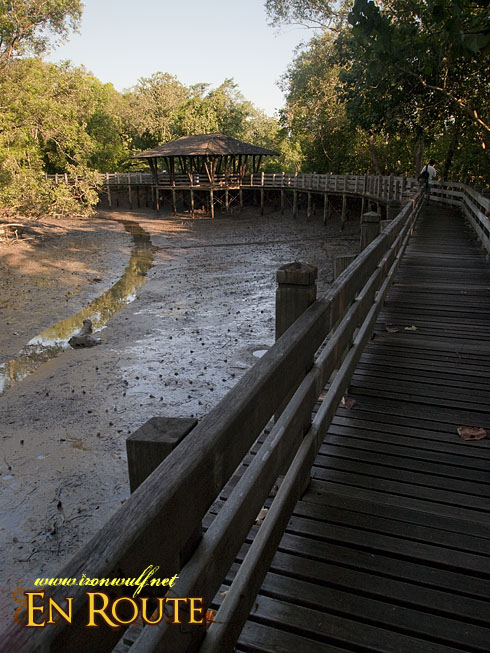 The longest Mangrove Boardwalk at Route 2

Going back to Route 2 south way, we traversed another mangrove boardwalk this time, which is the longest in the reserve. It took us through the Mangrove Arboretum. The forest of mangrove trees was just beautiful at that time. Especially with the low sun casting dramatic shadows into the forest. We tried to keep our steps as quiet as possible as we walk along the boardwalk as not to disturb any animals nearby. We did get to photograph a squirrel scouring through the bushes until a noisy group of tourist came by. 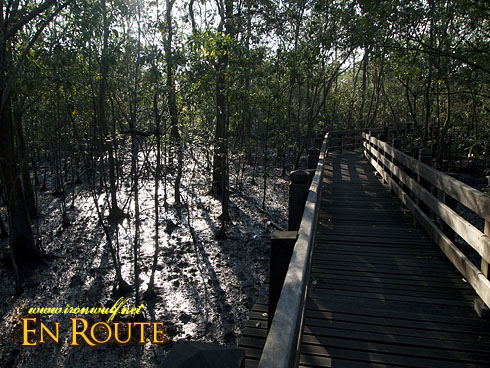 The sun casting long shadows at the Mangrove Arboretum

We made it back to Route 1 where we just waited for the sun to settle and then headed to the Main Bridge where we spotted a large number of egrets gathering by the river shores at low light. It was great seeing them there and never knew that it was during dusk when they show themselves in groups. We headed back to the Visitor Center just in time for closing. 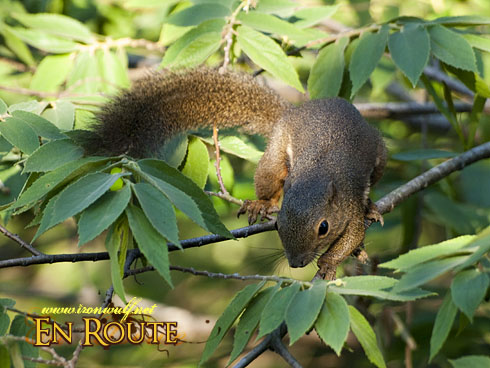 A squirrel scouring at Route 2

Another large monitor lizards was walking into the halls of the complex and staffs seems to be unmindful of them that it seems they are part of the payroll as well. It was already dark outside and we were worried if there are still any buses that may pass there. After a few minutes of waiting and reapplying a mosquito repellent, a bus did came finally. 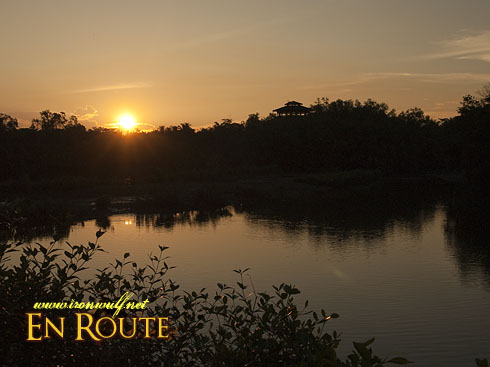 I enjoyed my journey through the Sungei Buloh Wetland Reserve. Just when I thought Singapore is all buildings and shopping, it’s great to have discovered that little slice of the country they have developed as a Nature Reserve. Sure changed my image of Singapore. 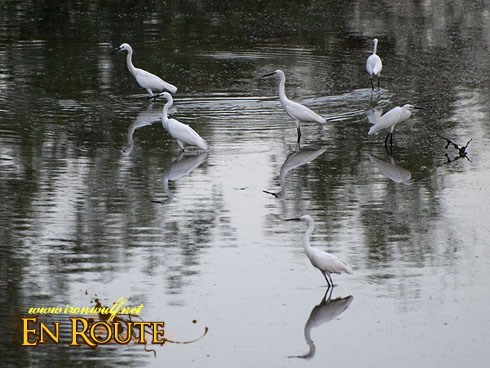 A group of Egrets at Sungei Buloh Reserve

Admission is free on weekdays, on Saturday, Sundays and Public Holidays, entrance is SG$1 for adults and SG$0.50 for children, students and senior citizens.

Public Transport to Sungei Buloh
From Kranji MRT Station, take the SMRT bus 925 and alight at the Reserve Entrance.