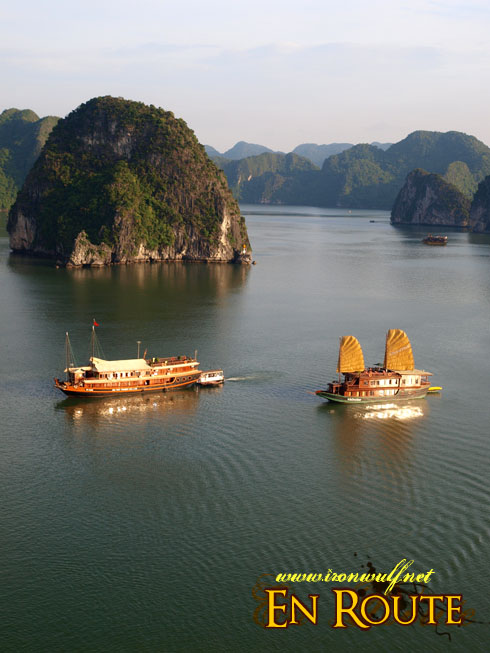 Bay of the Descending Dragons is such a dramatic phrase. It’s like going into a mythical world where magic and mythical creatures still exist. Quite unlikely in this day and age, but Ha Long Bay, which literally means the same phrase can be a good setting for a fantasy movie. This karst filled bay found in Quảng Ninh province in Vietnam, 170km east of Hanoi, is a UNESCO World Heritage site. Let us go on a photographic journey in this natural wonder. 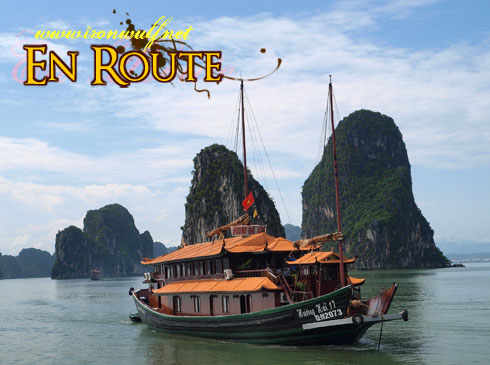 Junk Approaches. Inspired by the old and sturdy Chinese ships. This new ones are modifeed for live-aboard accommodations for tourist. For Handspan, we got the Aloha Junk Cruise which is around 112 USD per pax. It’s such a sweet deal since it covers everything from food, ship lodging, transpo to-and-fro Hanoi-Ha Long, sumptuous on board meals and entrance park tickets matched by quality service. Thumbs up. 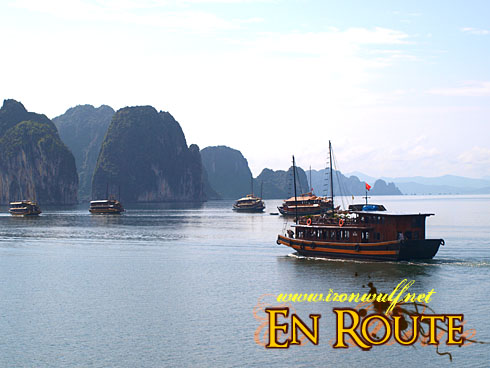 Into the Karst Kingdom

Into the Karst Kingdom. From the port of Ha Long, it’s just a few minutes sail into the bay. There are several junks along for the sail but the bay is wide enough to accommodate most of them. 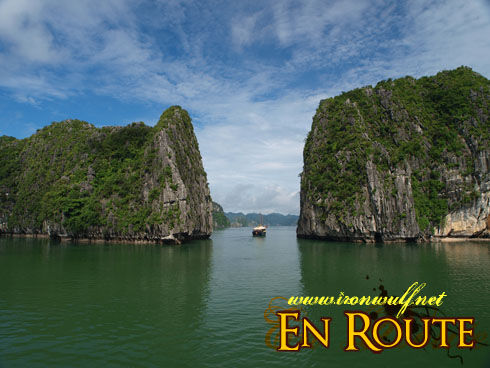 The Gate Way. A lone junk is dwarfed as it passes through a couple of towering lime stones. Just an indication of the varying sizes of the karst dotting the Bay. 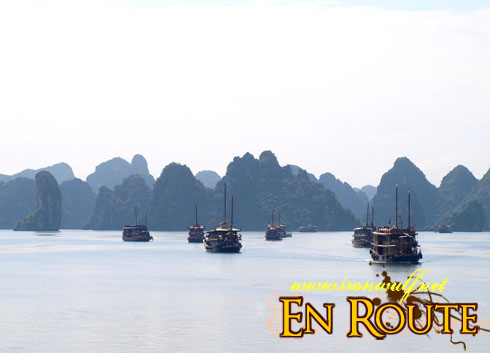 As far as the eyes can see

As far as the eyes can see. It’s hard not to compare this place to our very own Palawan. Indeed Coron and El Nido boast of numerous karst as well, but I guess around 2000 karst here clearly outnumbers both. Even if we’re cruising for more than a couple of hours there are still karst skyline fading into the horizon. 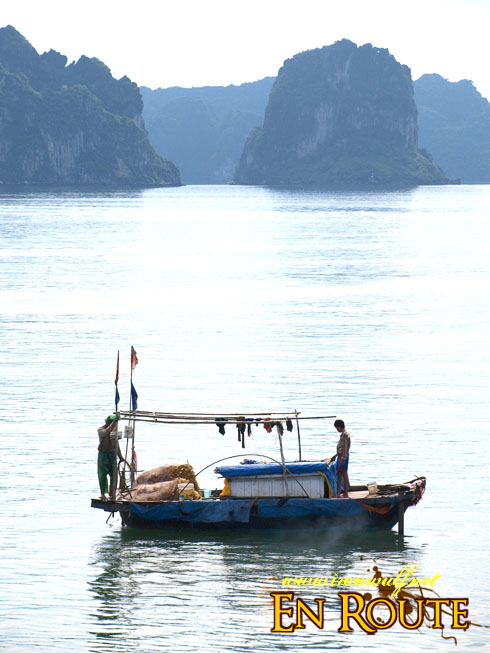 Ha Long Bay Fishermen. Of course the local colors in Ha Long Bay is hard to ignore. Much like our coastal livelihood, fishing is the main source. 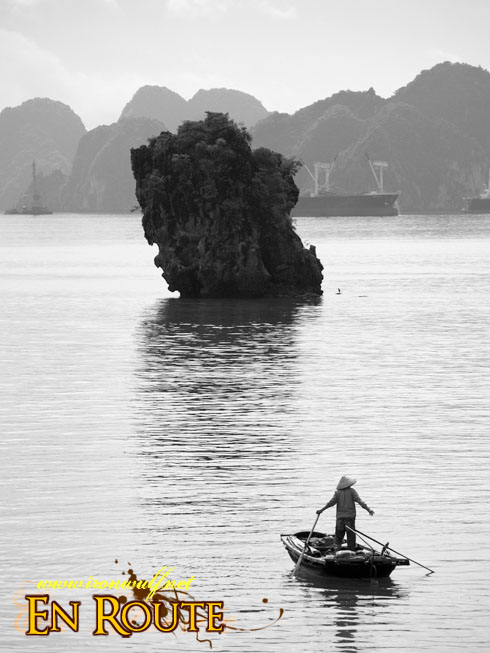 It stands, I stood

It stands, I stood. It’s an amusing scene of a lone karst standing at the bay and a lone fisherman standing face to face with this karst. An image converted to monochrome to lessen the distraction of colors from the construction vessel at the background. 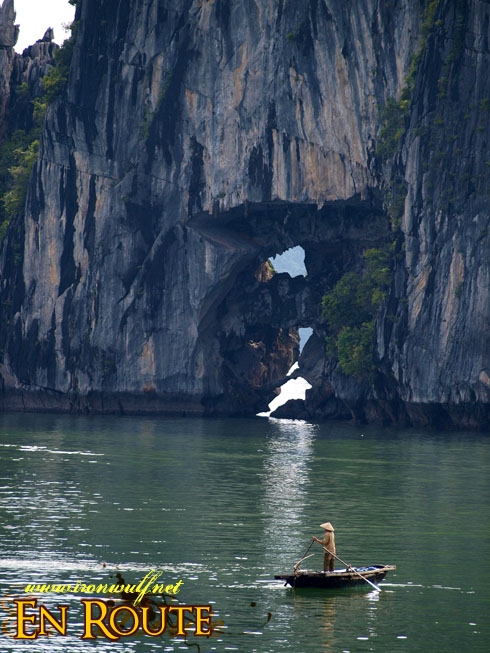 Not so whole hole

Not so whole hole. It’s quite amusing sometimes that a natural hole in nature can be treated as a grand attraction. It’s like the finger of God just punches through a wall and it ends up as nature’s art. This hole isn’t a complete big hole yet curious eyes are still caught by it. 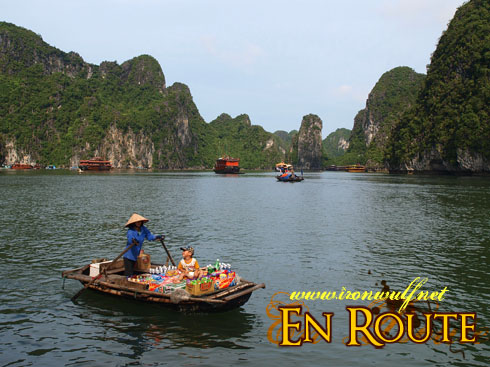 Buy from me Sir?

Buy from me sir? A common phrase you’ll hear if you are a noticeable tourist in a foreign land. The bay is not an escape as locals bring their wares on a boat and repeat those phrases to you. It’s an amusing scene though very risky for these vendors as well. Like David and Goliath, these small vendor boats have to run away from the trail of larger junks. I guess their used to it, but still a dangerous job for them. 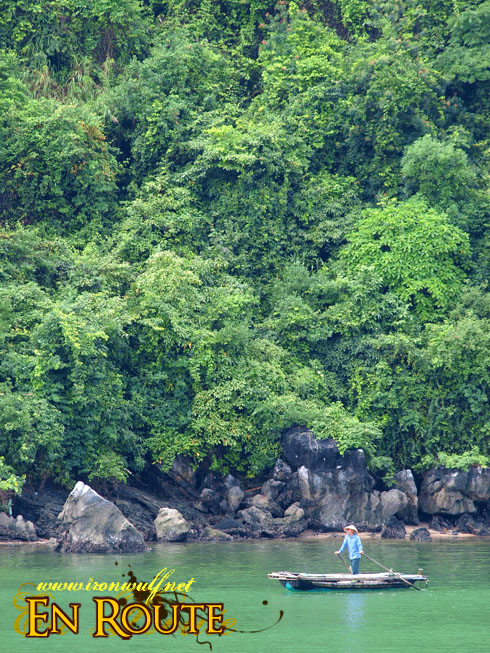 Seeing Green. The tall lime stones in Ha Long Bay have a lush vegetation. The scene of this towering greens amidst the emerald sea is a soothing sight for the weary eyed. 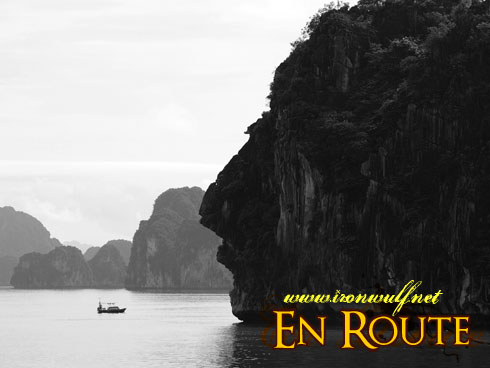 A look at the side

A look on the side. Karst formations come in different forms and sizes. This is a photo converted to monochrome to highlight the contrast of this karst formation that resembles a profile of a man. An evident outline of a man that seems to look at the sea. 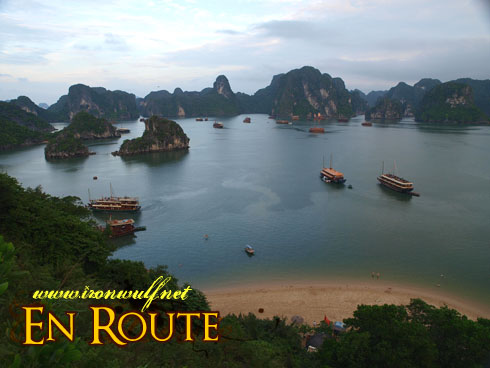 Where Tito P has landed?

Where Tito P has landed? A Karst beach island named after a cosmonaut, Tito P. The beach here is just ok, nothing to be raved about. If Ha Long Bay beats us through sheer numbers, our Palawan hands down has the most number of pristine beaches and crystal clear blue waters. 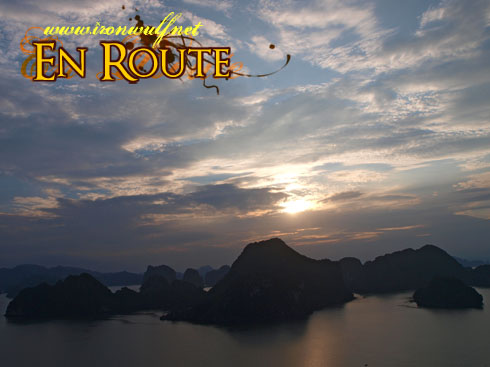 Nebulous Sunset. At Tito P Island, you can climb at the peak of its karst and have a 360 degree view of the bay. Frankly, it reminded me somehow of the climb at Mt. Tapyas in Coron. It has an amazing view of the islands and the bay. We waited for a while there for the sun to set but it was obscured by a set of low clouds. Nothing grand but the gradation of karst in the horizon shaded by the fading light is also a sight to see.