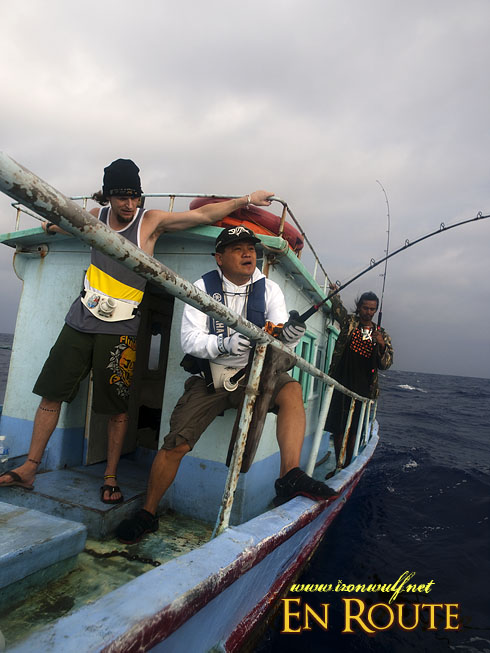 “You have to be on your own mettle with fishing, but you don’t really succeed at it until you calm down, accept what the weather’s going to give you” – Charles Rangeley, author

I’ve always thought that Batanes is rich in underwater life but it has never been really exploited. It’s remoteness (and pricey flights) really prevented a lot of people for coming here to gamefish. It’s really fortunate that on one of my assignments on Seair Inflight, I was able to observe what it’s like to fish here. Here are some excerpts from writer Chip Childers taken from his article “Desperate Angler”. 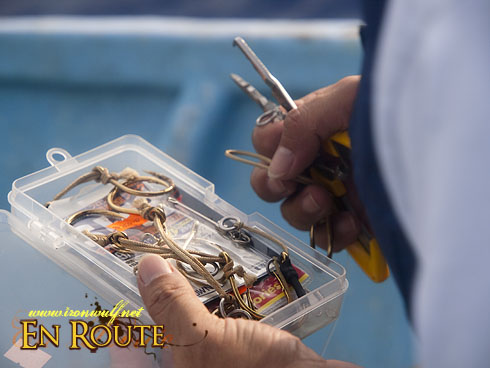 An organized box of hooks and lures

“By all accounts, I had every right to be having a miserable time. The wind was pelting us with rain that felt like rock salt fired out of a shotgun, the ocean swells were tossing our round-hulled falowa boat around like a woodchip in a washing machine, and periodic breakers had soaked every piece of clothing and electronic devices we had on board. 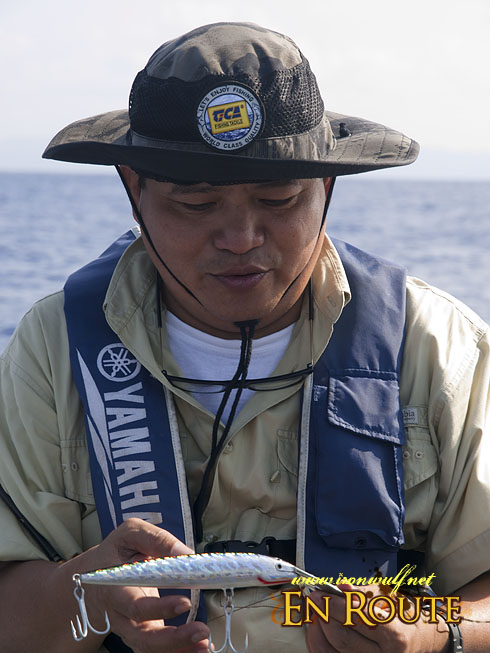 Gordon showing off the jig

There’s more. Several fish took my bait but got away, we no longer had a fish finder to help our search after having to use another boat that apparently had none, and massive unseen fishes had ripped all our good jis and lures right out of our hands. But strangely enough, despite all the factors that’s conspiring to get me down, I found myself energized and grinning like a kid at an amusement park, for on these rough seas I had a purpose – I was here to gamefish, and, as I bobbed off the coast of Basco, Batanes, I couldn’t think of a better place to do it, or better company to keep while dropping my line…” 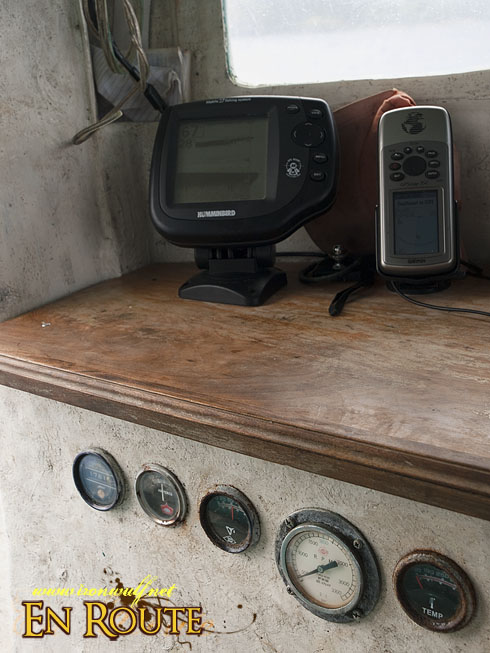 A Garmin GPS and a fish finder

That first paragraph sums up the whole experience of the assignment on game fishing in Batanes. Imagine waking up as early as 3:30 am in the morning then head off to Mahatao port to head to the sea. We were fishing on what locals call “Bagong Tuklas”. There are actually tree places for “Bagong Tuklas” and we were right smack in the ocean where we could see all three islands of Batanes. The waters were ripping and occasional rains damp at us. 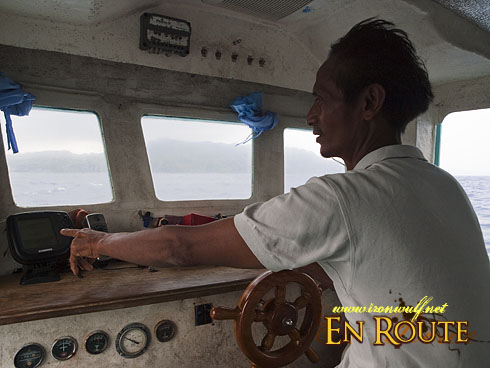 Our boat captain signaling that there are fishes in the area

“Batanes is a great place to go deep sea fishing – it is unspoiled and rarely fished with jigging techniques, so there’s a lot of large fish in deeper waters” says angler Gordun Uy. I’ve seen the jigging tools they used and I could see the sly smile from the angler when he had counted a good number of bites per hour. 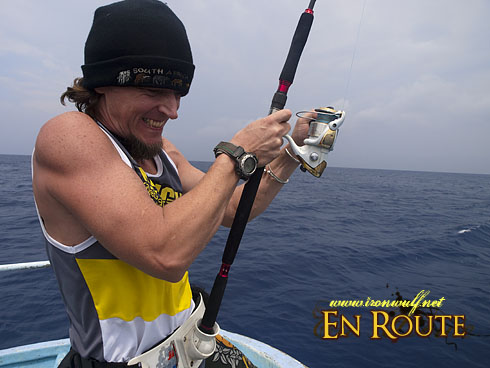 Writer Chip, struggling with his catch

“jigging is a fairly new school of fishing, enjoying a rebirth in Japan about 10 years ago, and entertaining fishermen here for about three. Jigging has brought a whole new generation of anglers to fishing, with many of the old anglers switching as well…” 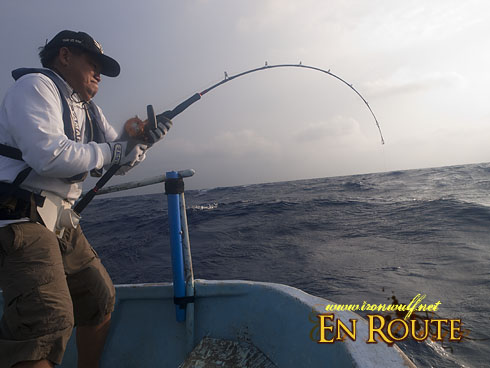 “Jigging is a much more physical a type of fishing than other types like trawling and even casting. It’s much more active and you’re not just waiting for the fish..” Gordon said, proving his point over burst of reeling and muscling the lead jig up from the ocean depths. He soon showed us how it was done by pulling a 10kg yellow fin tuna, which was later made into four dishes that evening’s dinner, including the best sashimi I had in this millennium. 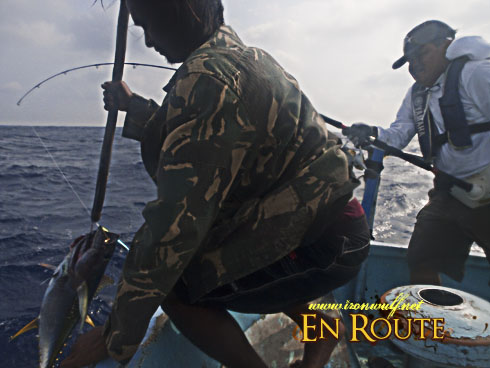 “… we headed into a rocky point that stretched into the sea just south of Basco. Here, Gordon and I tried our luck at popping, casting off into the surf and pools and trying to attract the giant trevallys with the splash of the lure as we draw it back to shore. As we stood on rock outcroppings, clouds covering Mt. Iraya suddenly cleared, revealing the dormant volcano’s giant mass, perched on the edge of Batan Island like a Hershey Kiss sitting on top of a deck of cards. 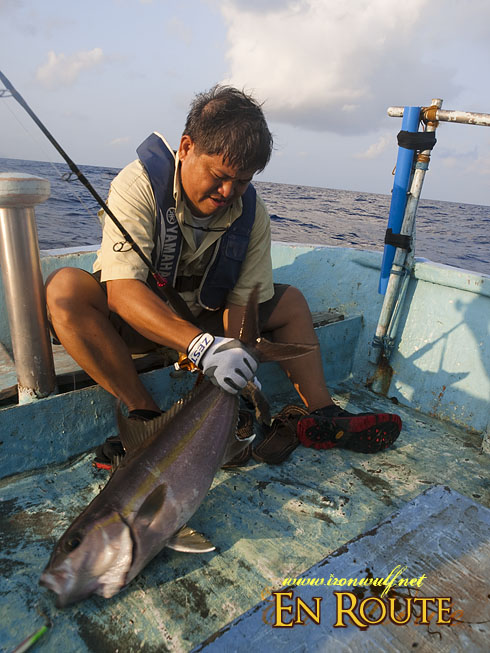 “The Ivatans are natural fishermen. They have as many words as the Eskimos have for snow and the ancient Muslim sailors have for winds that powered them around their trading ports. 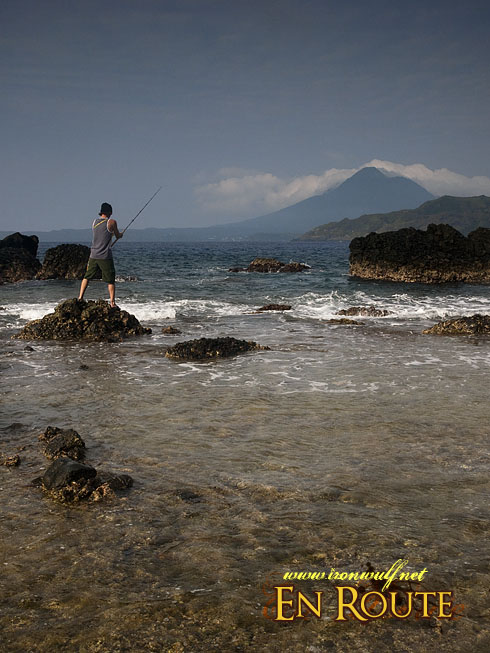 Mt Iraya as seen from Mabutay while Popping

“As our third day started drawing to a close, the weather seemed to get angrier. Some people were spotted on the shore, impossibly far from shelter or civilization, perhaps tending to livestocks or beach combing. More dolphins than I’ve ever seen in one day cruised by several times, some breaching right off our bow. 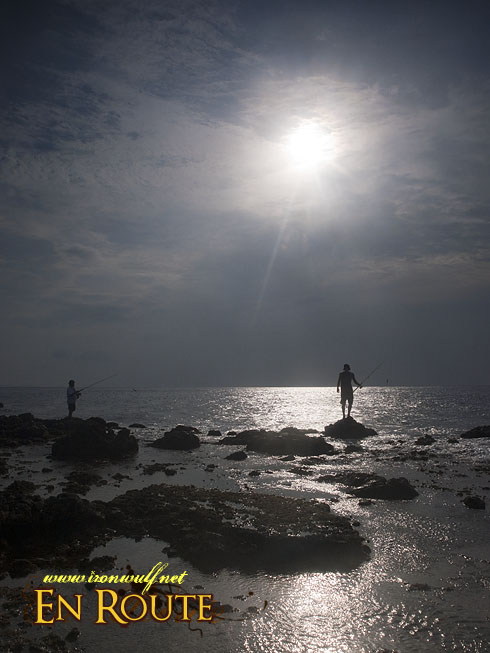 Popping into the suna t Mabutay

“The King Kong Island-like uninhabited islet of Denim, with its mysterious fisherman taboos, cut through the clouds like an ominous arrowhead jutting from the ocean. As our falowa pulled back into Basco port with the last rays of the daylight, I felt a tinge of regret that my time in Batanes had not resulted in some gaping, scaled Leviathan that could complete the empty spot on my family’s fishing wall. But the flipside to my coming home empty handed is it ensured I would have to come back to Batanes and continue my quest.