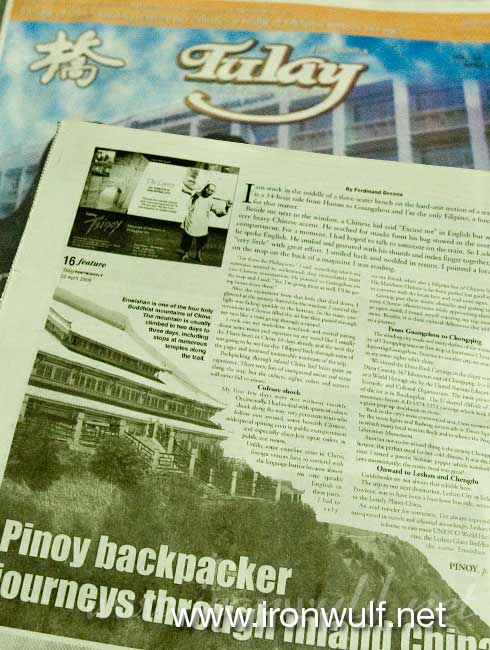 Happy mother’s day to all the mothers out there! My mom’s not celebrating with us, since she’s going to a Church Camp up in Zambales with other moms. Good for her, we’ll just celebrate when she gets back. Anyways, I never knew that staging an exhibit can be quite a bit of work, but it has been a great learning experience for me as well. Since I was preoccupied last week on organizing and coordinating I never found much time to do a post. For now, I’ll share this article I wrote for Tulay, a Chinese-Filipino Fortnightly Digest. This digest as it slogan wrote “A bridge of understanding between two cultures; a bridge of tolerance between ages”. 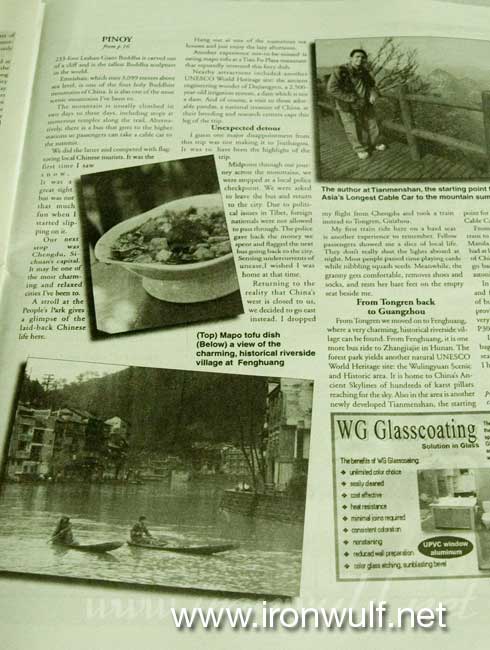 I guess my story of exploration inland China fits the digests aims of knowing and rediscovering the lineage of Chinese Filipinos and understanding between two cultures. Aside from that, the places I’ve been is not a typical destination that even a common Chinese-Filipino would explore.

So allow me to share this published article last April 22, 2008 on the said digest. Somehow, it’s like a summary of my trip to China and what more to expect from this site. It was tricky writing this, trying to compress as much details as I can in less than 1500 words. Many thanks to Oggie for proofreading the article and Old Manila Streetwalker Ivan Mandy for the opportunity to write this and editing the final draft. The article below:

I found myself stuck in the middle of a three-seater bench on the hard-seat section of a train. It’s a 14-hour ride from Hunan to Guangzhou and I’m the only Filipino, a foreigner for that matter.

Beside me next to the window, a Chinese kid said “Excuse me” in English but with a very heavy Chinese accent. He reached for some snacks from his bag stowed in the overhead compartment. For a moment, I had hoped to talk to someone on the train so I asked if he spoke English. He smiled and gestured with his thumb and index finger together, saying “Very little,” with great effort. I smiled back and nodded in return. I pointed a location on the map at the back of a magazine I was reading.

“I’m from the Philippines”, I said, something which my seatmates seemed to understand: they immediately burst into their Chinese conversation. He pointed Guangzhou on the map and I said yes “I’m going there as well. I’ll be going home from there.”

After the excitement from that little chat had died down, I glanced by the passing scenery framed by the window. I noticed the light was fading quickly in the horizon. In the train, conversations in Chinese fill the walls but they only passed through my ears like a train going through a tunnel.

I took out my moleskine notebook and started jotting down some notes and expenses on my travel as I usually do. I have beein in China 10 days already and the next day was going to be my last day. I flipped back through some of the pages and reviewed memorable moments of the trip.

Backpacking through inland China has been quite an experience. There were lots of unexpected twists and turns along the way, but the culture, sights, colors, and scenery will never fail to amaze.

CULTURE SHOCK. My first few days in were not without trouble. Occasionally, I had to deal with some spurts of culture shocks along the way: the very persistent touts that follow you around, some boorish Chinese, widespread spitting even in public transportation and especially door-less squat toilets in public rest rooms.

Unlike some coastline cities in China, you also have to contend with the language barrier because almost no one speaks English in these parts. I had to rely on my friend, who’s also a Filipino but of Chinese lineage. Even so, his Mandarin Chinese is far from perfect but good enough to converse with the locals here and read some signs.

Getting past these minor obstacles and getting used to some Chinese idiosyncrasies while approaching them with an open mind, I found myself enjoying my trip more and more. Besides, it’s these cultural differences which add color of a journey.

FROM GUANGZHOU TO CHONGQING. The winding city roads and misty skyline of the municipality of Chongqing was our first stop in South West China after departing Guangzhou. Enroute to another city, we managed to see some sights while there.

We visited the Dazu Rock Carvings in the sleepy town of Dazu County, 167 kilometers east of Chongqing. It is listed as United Nations Educational Scientific and Cultural Organization. The most preserved of the lot is in Baodingshan. The U-shaped cliffside of the mountain boasts AD 1174-1252 century carvings which looks like a giant pop-up storybook etched in stone.

Back in the main city’s commercial area, I was mesmerized by the neon lights and flashing screen ads at the city’s Time Square. It’s their main commercial area where lots of local tourists flock and admire the People’s Liberation Monument.

Another not-to-be-missed thing is their specialty cuisine, the steamy Chongqing Hotpot which is perfect for the cold atmosphere of the place. It was my first time to taste a potent Sichuan pepper which numbed my jaws momentarily; the entire meal was great.

ONWARDS TO LESHAN and CHENGDU. Guidebooks are not always that reliable here.

The trip to our next destination, Leshan City in Sichuan Province, was to have been a four-hour bus ride according to Lonely Planet China.

Emeishan, which stands at 3099m above sea level, is one of the four sacred mountains of China. It is also so far one of the most scenic mountains I’ve been to.

The mountain is usually climbed in two days to three days, including stops at numerous temples along the trail. Alternatively, there is a bus which can take you to the higher stations and ride a cable car to the summit.

We did the latter and competed with flag-toting local Chinese tourist there. It was also the first time I saw snow. It was a great sight but was not that fun when I started slipping on it.

Our next stop was the city of Chengdu, Sichuan’s Capital. It may be one of the most charming and relaxed cities I’ve been to.

A stroll at the People’s Park will give you a glimpse of the laid-back Chinese life here.

Hang out at one of the numerous tea houses there and just enjoy the lazy afternoon.

Another experience not-to-be-missed is eating mapo tofu at a Tian Fu Plaza Plaza restaurant that reputedly invented this fiery dish.

Nearby attractions include another UNESCO World Heritage site, the ancient engineering wonder of Dujiangyen, a 2,500-year-old irrigation system, a dam which is not a dam. And of course, a visit to those adorable Pandas, a national treasure of China, at their breeding and research centers caps this leg of the trip.

UNEXPECTED DETOUR. I guess one major disappointment from this trip was not making it to Jiuzhaigou. It was to have been the highlight of the trip.

Midpoint through our journey across the mountains, we were stopped at a local police checkpoint. We were asked to leave the bus and return to the city. Due to political issues in Tibet, foreign nationals were not allowed to pass through. The police gave back the money we spent and flagged the next bus going back to the city. Seeing undercurrents of unease, I wished I was home at that time.

Returning to the reality that China’s west is closed to us, we decided to go east instead. I dropped my flight from Chengdu and we took a train instead to Tongren, Guizhou.

My first train ride here on a hard seat is another experience to remember. Fellow passengers showed me a slice of the local life from the people in the train. They don’t really shut the lights aboard at night. Most people passed time playing cards while nibbling squash seeds. Meanwhile, the granny gets comfortable, removes shoes and socks, and rests her bare feet on the empty seat beside me.

FROM TONGREN BACK TO GUANGZHOU. From Tongren we moved on to Fenghuang, where a very charming, historical riverside village can be found. From Fenghuang, it’s one more bus ride to Zhangjiajie in Hunan. The forest park yields another natural UNESCO World Heritage site: the Wulingyuan Scenic and Historic area. It is home to China’s Ancient Skylines of hundreds of karst pillars reaching for the sky. Also in the area is another newly developed attraction, the Tianmenshan, the starting point of a scenic ride onboard Asia’s Longest Cable Car to the mountain summit.

From Zhangjiajie, Hunan, I took this overnight train to Guangzhou to catch a flight back to Manila. I left my friend in Hunan because he had at least another week to explore other parts of China. I envied him for that, but I had to go back. Looking back at all of these, I felt astonishingly satisfied with the whole trip.

Having visited five provinces, four UNESCO sites, made a number of bus transfers, took two train rides across provinces, sampled local cuisines and stayed at very good accommodations. All this for only P30, 000 – one of my best budget trips ever.

I closed my notebook and put it inside my bag and started to settle comfortably on my seat. I closed my eyes and remembered the time when I had dreamed of exploring China.