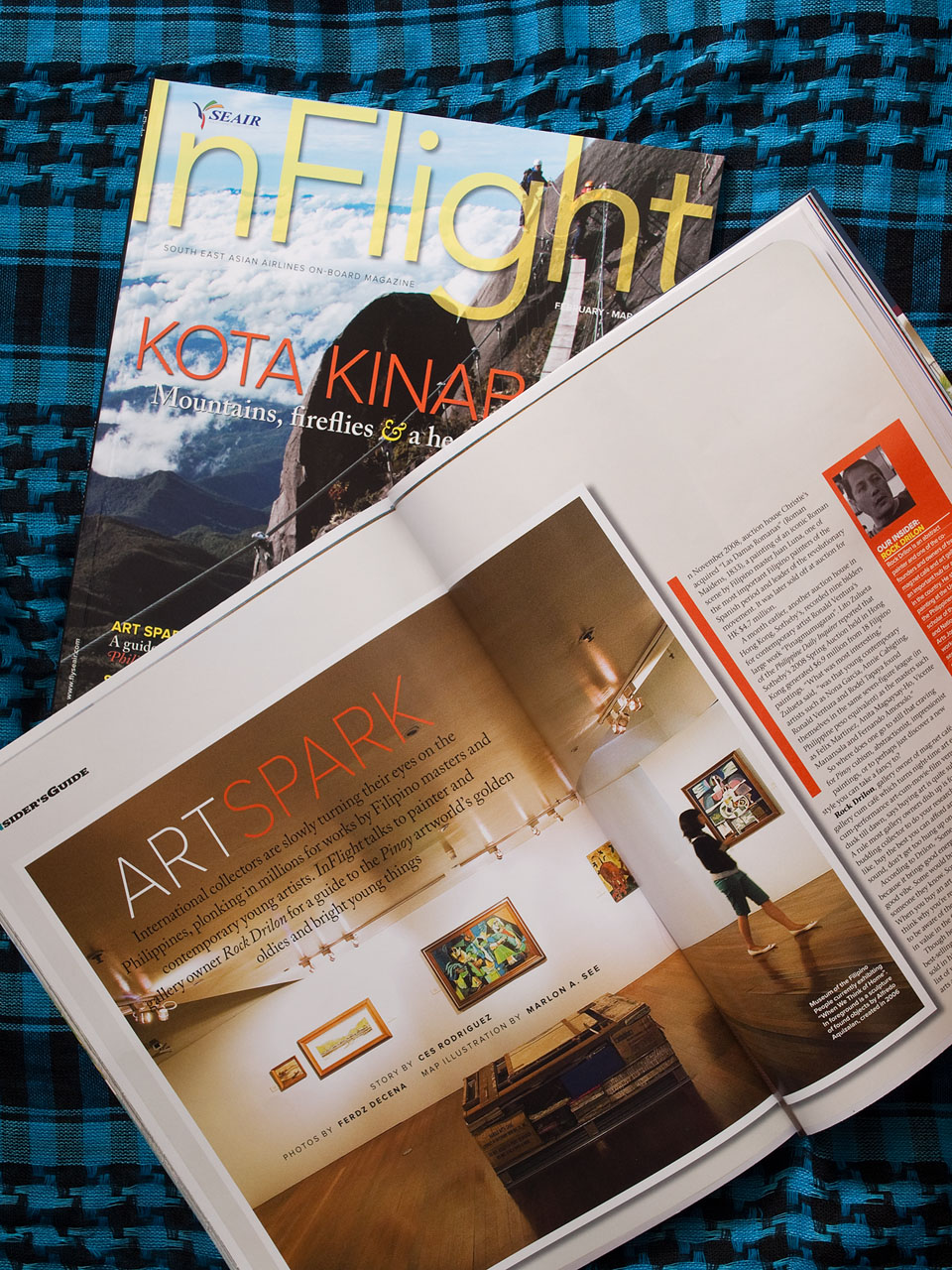 Seair Inflight’s February – March 2009 Magazine is now available. In this issue, you’ll find the “Art Spark” story feature on the Insider’s Guide section. Insightfully written by Ces Rodriguez and ingenious layout by Jocas See, I was fortunate enough to be the photographer for this feature. The story is all about the interesting Art trail in Manila from the prehistoric to the religious, traditional and modern and even to the emerging and hip art scene. This was a 2 day photo assignment shot early 2009. I found it a bit challenging since most of the time we shoot indoors for this one and focused more on the culture, objects and architecture rather than outdoor scenery and portraits.

END_OF_DOCUMENT_TOKEN_TO_BE_REPLACED 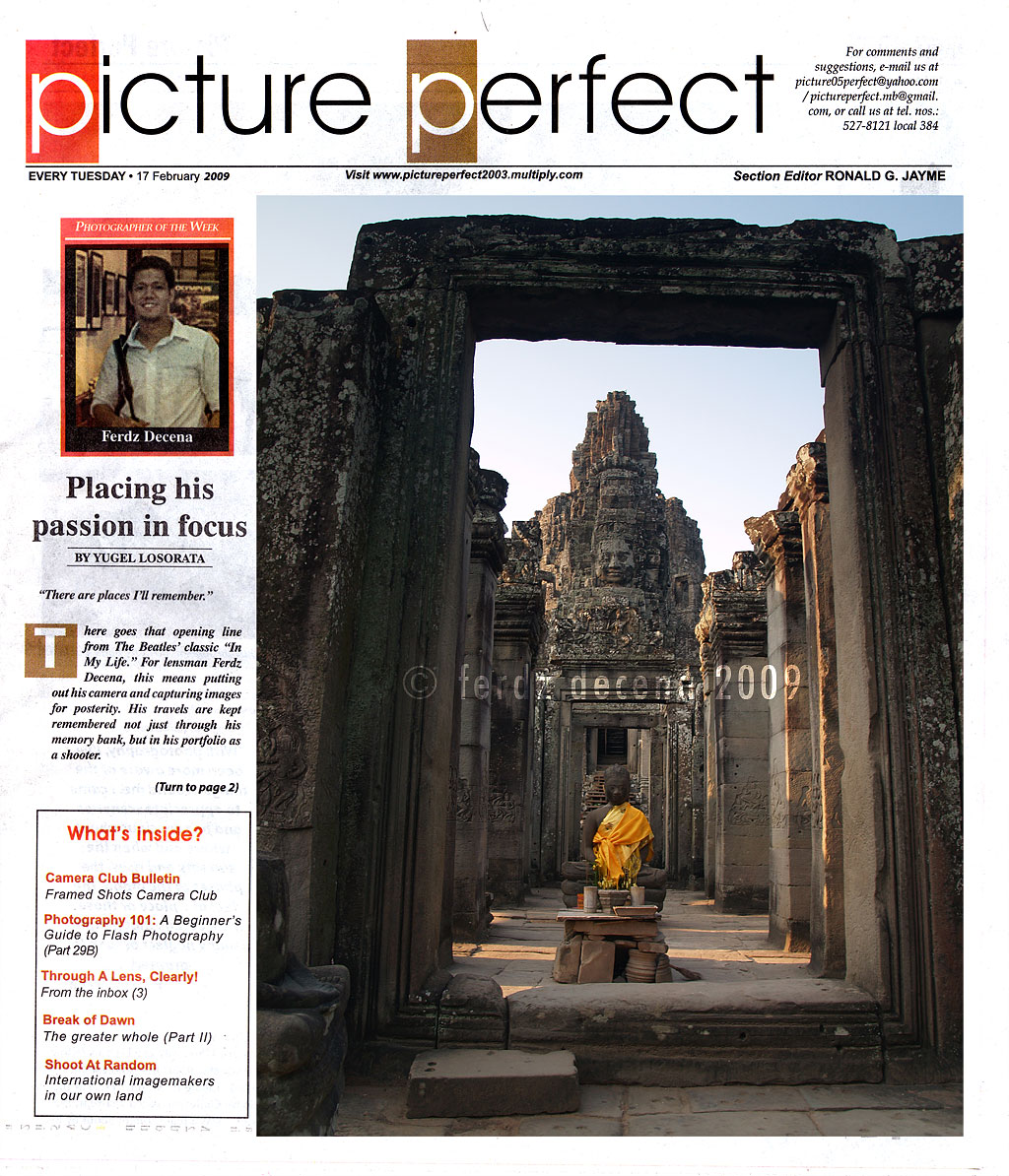 It’s always feels great to have your work noticed. I honestly never imagined to be a feature on Picture Perfect so it was a pleasant surprise when I heard from Ronald Jayme if I could be one of their Photographer of the Week feature. I was still in Laos when the issue came out so I only got to see it a few days after it was out. Though I think the layout could be a little better ( I thought the photos were a bit cramped) and Newsprint really isn’t an ideal medium to print your photos, I really really appreciate the mileage and exposure Manila Bulletin’s Picture Perfect has given. Even considering me as a feature was honor enough. So my sincerest thanks to Ronald Jayme for the feature and to Yugel Losorata for the write up. Below is the write up and you can click on the images for the higher resolution.

There goes that opening line from The Beatles’ classic “In My Life.” For lensman Ferdz Decena, this means putting out his camera and capturing images for posterity. His travels are kept remembered not just through his memory bank, but in his portfolio as a shooter.

END_OF_DOCUMENT_TOKEN_TO_BE_REPLACED 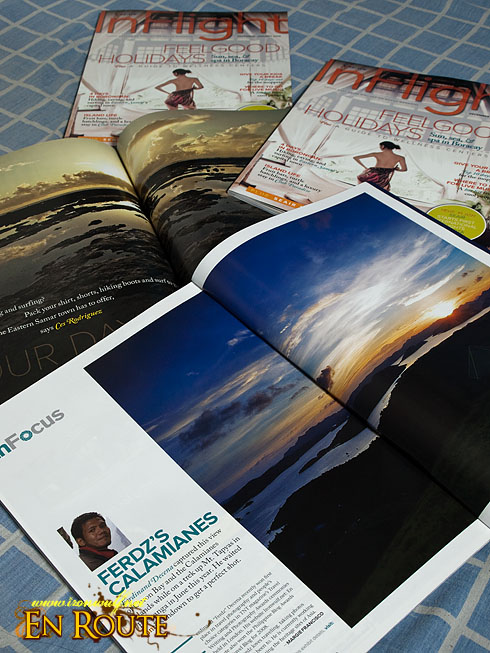 Seair Inflight December 2008 – January 2009 is already out. Aside from the gorgeous and classy cover (shot by Daniel Soriano, Art Direction by Jocas See and creative concept by the Inflight Team) and the beautiful in-depth insider feature on their new destination Borongan in Samar, covered by my friend Lagal[og], yours truly was able to share a spread space in this awesome issue as the Seair Inflight Infocus Photographer.

END_OF_DOCUMENT_TOKEN_TO_BE_REPLACED 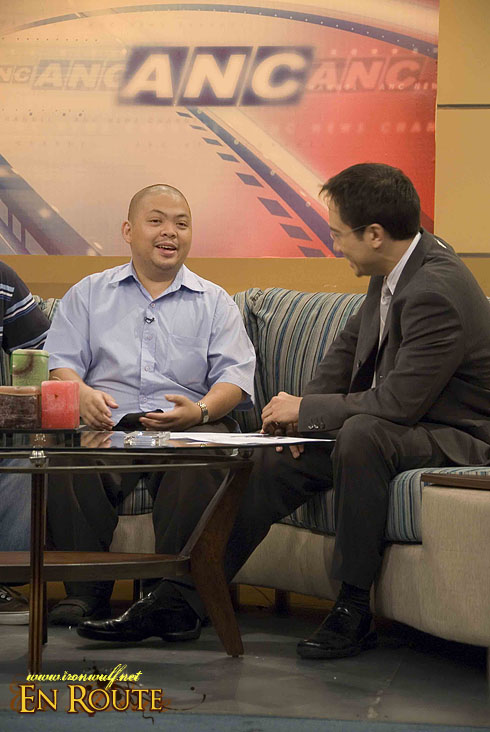 Juned Sonido, one of the Philippine Blog Awards organizer being interviewed by TJ Manotoc at [email protected]

END_OF_DOCUMENT_TOKEN_TO_BE_REPLACED 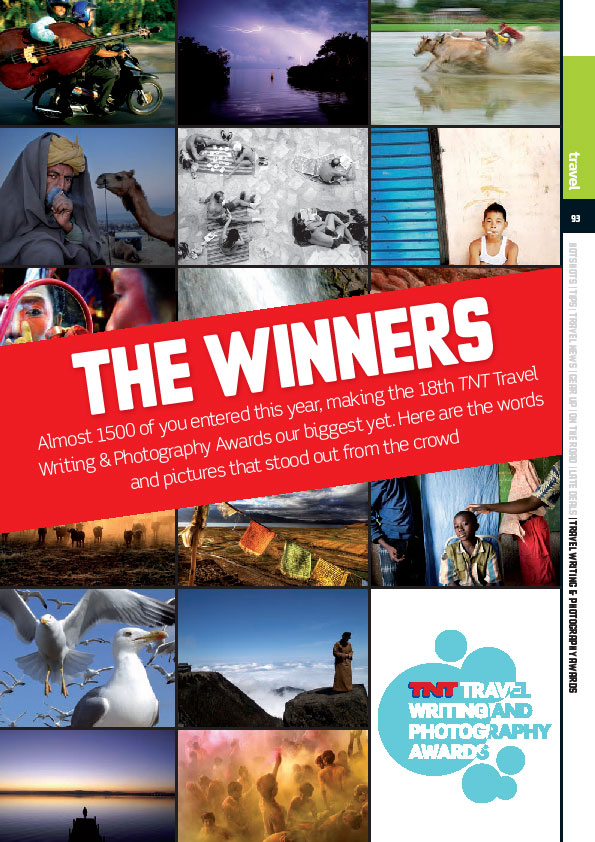 TNT Magazine London recently had their TNT Winter Travel Show Gallery at Royal Horticultal Halls last September 13, 2008. Also that night they announced the winners of their 18th TNT Travel Writing and Photography Awards. Since I wasn’t there at the venue, it took me a few days before I knew of the results. Mid-last week i found out through an email that I won First Place for the Travel Photography category The World Around Us. And to add to that not I also won the People’s Choice Award which resulted from online voting and offline voting at the Soho Gallery exhibit at Carnaby, Sacred Cafe. Reading the email, I still can’t believe the news that I’ve won.

END_OF_DOCUMENT_TOKEN_TO_BE_REPLACED 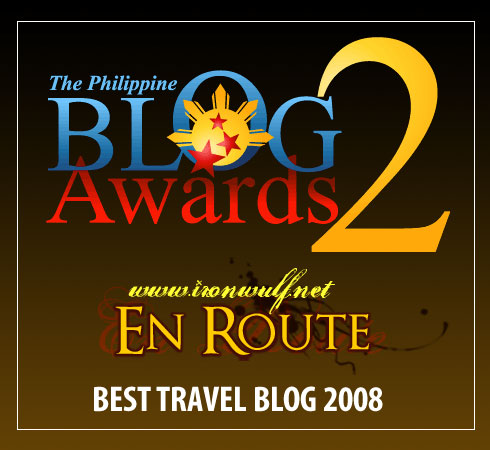 Ironwulf.net is Best Travel Blog for 2008

I remember it was last year, 2007 when this blog was also a finalist in both awards division Philippine Blog Awards and Philippine Web Awards. Though I was happy I was in the finals before, I was a little disappointed when I didn’t bag the main awards. I know being a finalist is an honor in itself and not to mention the exposure (and traffic) it garnered, but I would be a hypocrite not to say that somehow even a bit of a hint, I also wanted to get those recognitions. Not only for the opportunities it can open but also as a self-fulfillment. There is always that tense and uneasy feeling of the unknown when you are part of that final-list. Try as I might not to think about it but it keeps dodging in which can be a bit frustrating.

This year, 2008, I chose not to actively seek any award as I did last year. That’s why when PBA 2 was announced I took it lightly and just try to focus more on my travels and enriching this blog’s content. But when I got a nomination in the mail last August, I was a bit hesitant to accept it but still did so, thinking hey, let’s play around with this and just see where it goes. Win or not, it’s still an opportunity to reach more readers.

So last September 21, 2008, when the 2nd Philippine Blog Awards was held in One Esplanade it was a pleasant surprise to learn that I won the Best Travel Blog Awards. While I was not at the venue, I received some text messages that I got the Award and to add to that, I also won in the raffle for the Nokia N82 Cellphone. It’s really great to hear the news as I really am not expecting to get it anyhow with all the strong contenders with me.

END_OF_DOCUMENT_TOKEN_TO_BE_REPLACED 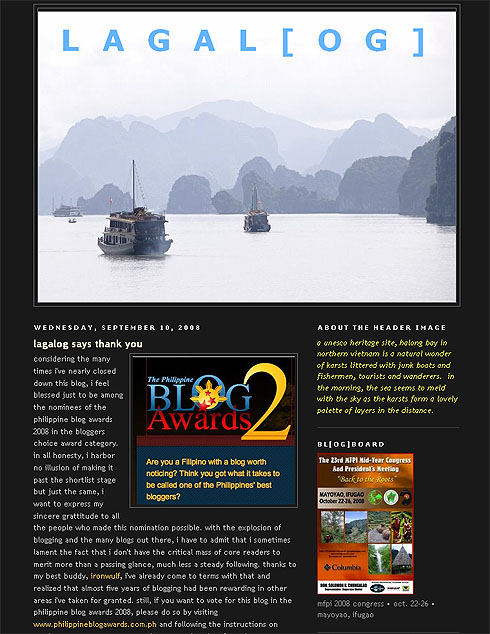 I am voting for Oggie’s Lagalog which can be found at oggieblog.blogspot.com for for Philippine Blog Awards 2008’s Blogger’s Choice Awards.