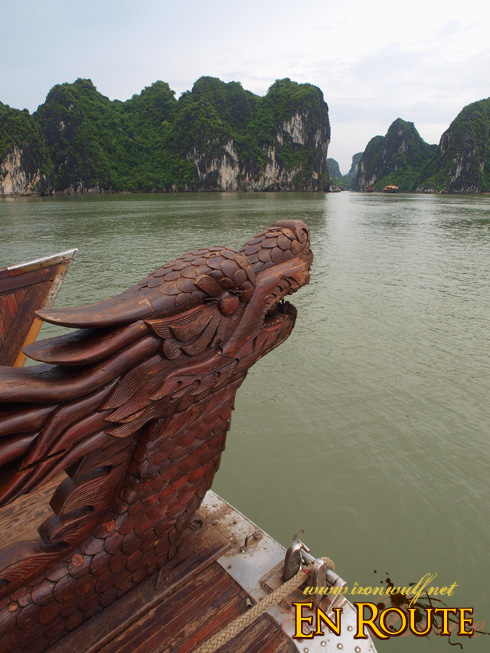 The Dragon at Ha Long Bay

I’ve been eying Ha Long Bay for some time now. In fact, I was supposed to go here on my first visit to Vietnam but ended up in the central area instead. But that place didn’t disappoint as well since it has 3 World Heritage sites that each yielded a unique experience: from the elaborate citadels and tomb raiding at Hue, warping back in time at the French Colonial streets of Hoi An and exploring the Ancient Kingdom of the Champas at My Son. But the natural wonder of a karst-filled bay has quite an appeal that I went fidgety with delight when my buddy Oggie informed me he was going to northern Vietnam. After much convincing and being accompanied by a good friend, I just couldn’t pass this up and joined the trip. 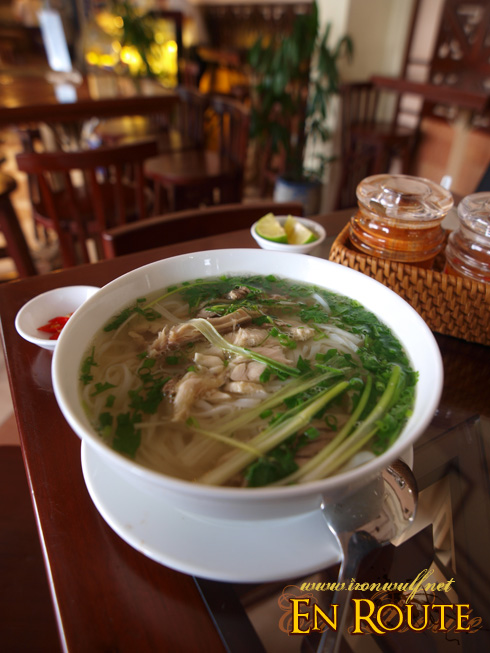 Having introduced a direct flight to key cities in Vietnam was a smart move from a popular local airline. Before, I had to jump from Singapore to Vietnam which is way more expensive and tiring. The catch with these low cost flights to Hanoi means you have to fly around midnight to these cities since it has lower operating cost at these times. So after at least a couple of hours in flight we arrived at Noi Bai Airport in Hanoi around 1am. There’s a one hour less time difference in Vietnam from our country. 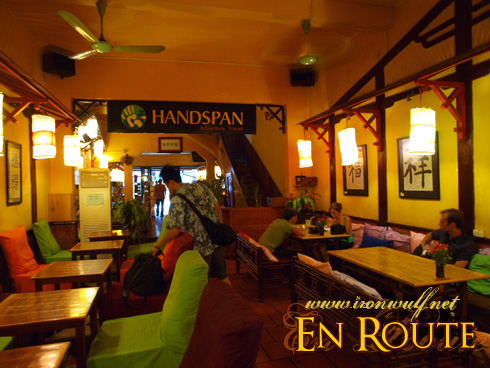 Our would be junk mates at Handspan office

Yearning for some sleep and a place to rest for the meantime, we took a taxi from the airport to the city and looked for a temporary lodging we could rest for a while. As expected with a some language barrier, it became a somewhat comical search for a place to stay in the middle of the night. In between consulting through maps and shorts stops along the highway, I could feel the frustration of our taxi driver along with his jovial laughter while he exclaimed “I could not understand”. 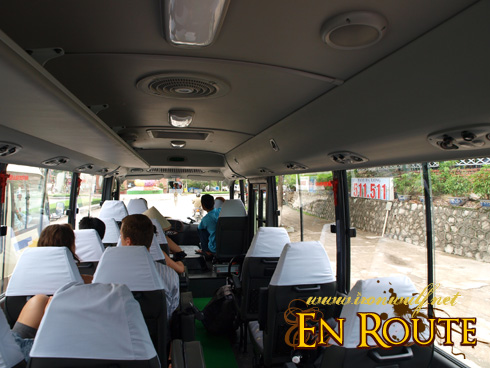 Passing through somewhat familiar roads like ours, we did eventually found Hanoi Backpacker’s Hostel where we stayed a few hours to snatch some sleep until the morning. We stayed at a dorm where a few Caucasians were already in bed, abruptly disturbed when the hotel staff turned on the lights. This is the 2nd time I stayed in a backpacker’s dorm. It’s quite strange sleeping in a room with people you don’t really know. Trying to move like a cockroach in the corner, making as little sound as possible not to disturb anyone. As soon as I was drifting off to sleep, a familiar smell of hash was lingering in the air. 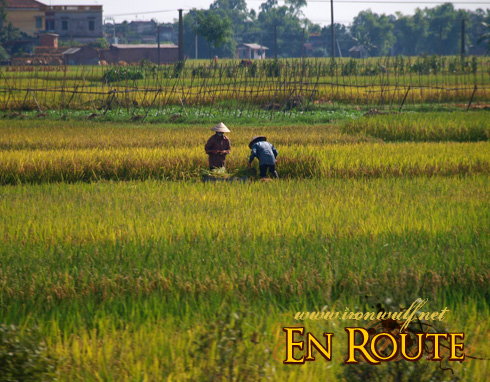 We checked out the Hostel a couple of hours before our call time with Handspan Adventure Travel agency at the nearby Ma May street at the Old Quarters. First we passed by this coffee shop near the rotonda north of Hoan Kiem lake to have breakfast. Ordered their specialty Pho Ga (chicken) noodle along with a choco croissant and mint tea on the side. Very good first meal in Hanoi. After which, we navigated a few streets to find Handspan. 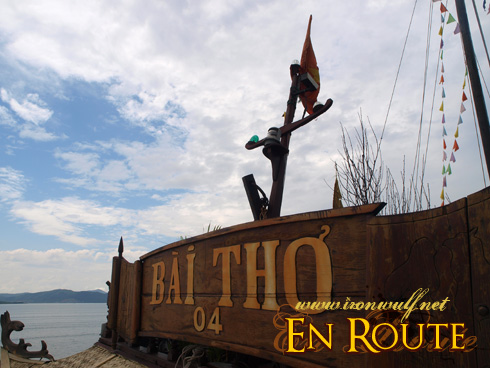 We booked ahead with Handspan agency before we went here. It is recommended to take packaged or guided tours if you are going to visit Ha Long Bay. Doing it on your own would be more costly and you would run a risk of encountering some frauds. There were several reputable Travel Agencies in Vietnam we were looking into but chose Handspan for it’s good reputation and better deal. And I’m saying this in advance that they did not disappoint and I would not hesitate to recommend them or contact them again in the future. 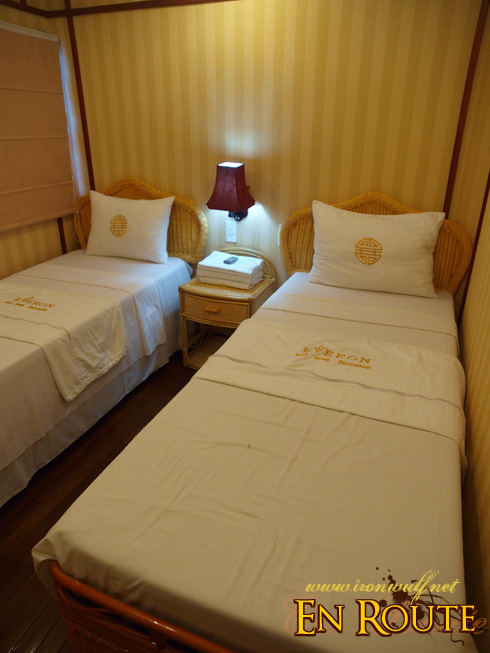 Cozy beds at our Junk room

We got there right on time to confirm our booking and also asked them to book for us in advance our train tickets to Lao Cai when we get back the next day. Everything seems to be in order. By 8am we rolled of to Ha Long Bay from our service bus. I was actually worried at first about the mini bus we’re using. I saw some pictures on the net of a very cramped bus but fortunately in ours, it was really comfortable and it wasn’t even filled. 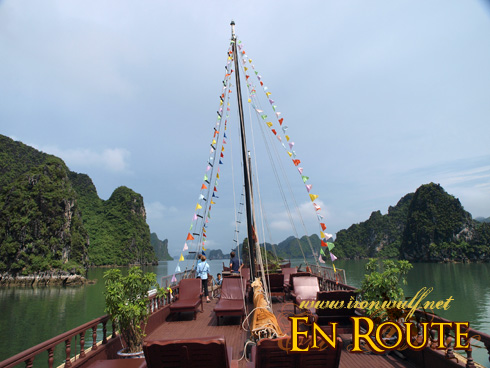 Travel time took about 3 hours. With rain pouring heavily on our way to Ha Long Bay we were a bit worried we might not be allowed to sail. Our young guide Phu, led us to our Junk when we arrived at the port. Junks are sturdy old Chinese vessels used for travel. But these junks are modified ones used for on-board accommodations. Like a mini cruise ship. We got our room assignments and found them to be really nice complete with toilet and hot shower. By lunch we got to meet our fellow junkees at the boat. It was actually great since the junk wasn’t full and we have a multi-national passengers aboard the ship. Lunch was sumptuous along with some witty conversations. Before we knew it, the ship was already moving towards the karst-filled bay and thank the heavens for clearing up the rain so we could see Ha Long Bay in good light.